Maryland property owners who have experienced flood damage remain unprepared for future problems. 'Main Street In Ellicott City, Maryland -- Two Months After The Flood Of July 30, 2016' by France1978 is marked with CC BY 2.0.

MOST FLOOD DAMAGED PROPERTIES TO FACE REPEAT PROBLEMS: High waters have caused repeated damage to more than 1,300 flood-insured homes, businesses and government buildings in the state in recent decades, according to data obtained by The Baltimore Sun. But only about one in every eight has been improved in ways likely to prevent significant future flood losses — and those are costs that taxpayers eventually could shoulder. Scott Dance/The Baltimore Sun.

DUELING EXPERTS BEFORE JUDGE IN REDISTRICTING CHALLENGE: Attorneys for a group of Republican delegates pressed a judge Wednesday to reject a Maryland General Assembly-approved map of state legislative districts that they say would illegally favor Democrats in elections. Jeff Barker/The Baltimore Sun.

ACLU RIFT WIDENS WITH JUDICIAL PROCEEDINGS CHAIR: A blog post published earlier this month by the American Civil Liberties Union of Maryland has widened a growing rift between the venerable organization and Senate Judicial Proceedings Committee Chair William C. Smith Jr. (D-Montgomery). Smith, the first Black senator from Montgomery County and the first Black chair of the Senate Judicial Proceedings Committee, is arguably the most progressive lawmaker ever to hold that powerful position. Hannah Gaskill/Maryland Matters. 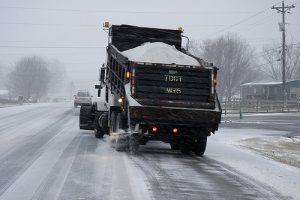 OPINION: TOO MUCH SALT ON OUR ROADS: Following our weekend snow event earlier this month, it is clear that the problem of salt usage on icy or snowy roads has not been solved. Management 101 tells us that we must capture data to fully understand this problem. … Salt costs $58 per ton.  It is so cheap that we throw it everywhere; we spread it even in the chance that we might have snow or ice.  Unfortunately, salt has many hidden costs. Karl Van Neste of Muddy Branch Alliance/Maryland Reporter.

PEREZ RELEASES FIRST TV CAMPAIGN AD: Tom Perez, a Democrat running to be Maryland’s next governor, released his first TV ad of the campaign on Wednesday, becoming the latest candidate in the crowded race to go up on the airwaves. Erin Cox/The Washington Post.

SEVEN YEARS DEAD, MOSBY’S GRANDDAD DONATES TO CAMPAIGN: He was buried seven years ago, but the grandfather of Baltimore State’s Attorney Marilyn Mosby apparently lives on as a source of campaign cash for her and her husband, City Council President Nick Mosby. Mark Reutter/Baltimore Brew.

FREDERICK BOARD OKs AFRICAN AMERICAN STUDIES COURSE: The Frederick County Board of Education gave final approval Wednesday night to a Black and African American studies course for high school juniors and seniors. Members of the public packed into the board’s meeting room, and many of them spoke in strong support of the course. It’s set to be offered as a social studies elective in the fall at any high school where enough students sign up. Jillian Atelsek/The Frederick News Post.

MO CO COUNCIL SUPPORTS MORE BUSES ON I-270: Montgomery County Council members expressed support on Tuesday for a plan that proposes more transit along the I-270 corridor, with increased bus service having a high priority. Steve Bohnel/Bethesda Beat.

STATE SETTLES WITH WOMAN WHO ACCUSED DEPUTY SHERIFF OF ASSAULT: The state of Maryland reached a $200,000 settlement with a woman who accused a former Baltimore County Sheriff’s Office deputy of sexually assaulting her while she was in state custody. Darcy Costello/The Baltimore Sun.