REDUCING JAIL POPULATION: An influential General Assembly panel is recommending significant changes in sentencing laws for drug use — part of a plan to imprison thousands fewer people and use the savings to help others stay out of jail, Luke Broadwater reports for the Sun. The bipartisan Justice Reinvestment Coordinating Council says the state can reduce the number of imprisoned Marylanders by 4,000 over the next decade, a decrease of nearly 20%.

WAR OF THE WORDS: Tis the season to be jolly, with good tidings of comfort and joy, but not between Comptroller Peter Franchot and Senate President Mike Miller.  This week they’ve had a spitting match conducted in that most old fashioned of social media: formal letters on government stationery filled with snark, insult and accusation, writes Len Lazarick for MarylandReporter.com, which has links to both letters.

REGULATING ONLINE FANTASY SPORTS: Maryland officials are reviewing online fantasy-sports operations to determine how the state should regulate the leagues and whether some may be illegal under a 2012 law restricting such activities to non-commercial purposes, Josh Hicks reports in the Post.  State Comptroller Peter Franchot, Attorney General Brian Frosh, aides to Gov. Larry Hogan and officials from the state lottery and gaming commission met behind closed doors in Annapolis on Thursday to discuss the issues.

HEALTH ISSUES: The “startling” rate at which opioid-related issues are driving hospital admissions and the need to provide more holistic care gave regional legislators plenty to ponder Thursday during the third annual Western Maryland Health Legislative Forum, writes Tamela Baker in the Hagerstown Herald-Mail.  While the issues ranged from cost containment to the need for more behavioral health beds, all were interrelated as the health care providers painted a picture of the changing face of needed services.

OF MUSIC & MONUMENTS: Maryland’s rarely sung state song may be in for some tinkering. A state advisory group is calling for changes to “Maryland, My Maryland” because it takes the Confederate side in the Civil War and bashes “Northern scum.” Sung to the same tune as the Christmas carol “O Tannenbaum,” the state anthem — performed mainly at the Preakness and some other official events — has irked or embarrassed many over the years because of its pro-Southern sentiments, reports Timothy Wheeler for the Sun. 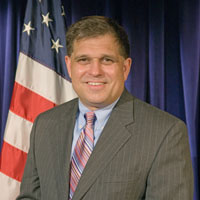 APPTS SECTY NAMED: Gov. Larry Hogan (R) has named an official in the Maryland Department of Transportation to serve as his appointments secretary. Ovetta Wiggins reports for the Post that Dennis Schrader, who previously served as the deputy secretary for policy, planning and enterprise services for the Transportation Department, will replace James Fielder. Earlier this week, Fielder was appointed as secretary of the Maryland Higher Education Commission.

LESSON IN PAPER BALLOTS: Paper ballots. Board of Elections office associate Daniel Oltman demonstrated the ballot marking device and scanning unit that will be used during the 2016 presidential election to an audience of about 12 at Mount Moriah African Methodist Episcopal Church in Annapolis Thursday night. It was one of a series of the presentations to inform voters about the new machines and how to use them, Brandi Bottalico reports for the Annapolis Capital.

LOBBYING FOR LIQUOR MONOPOLY: Montgomery County Executive Ike Leggett and County Council President Nancy Floreen on Wednesday came to the Greater Bethesda-Chevy Chase Chamber of Commerce to meet with business leaders on the other side of the county’s alcohol debate. Aaron Kraut reports that Floreen told Bethesda Beat the off-the-record meeting in Bethesda was “cordial” even though she did acknowledge “it’s a challenge to share information with people who have already made their mind up.”

JAWANDO TO DONATE SHKRELI DONATIONS: Martin Shkreli, the pharmaceutical executive and former hedge fund manager arrested on fraud charges Thursday, has given heavily to a Democratic candidate for Congress in Maryland’s 8th Congressional District, John Fritze reports in the Sun.  Jawando told the Sun he will donate the money contributed from Shkreli to The Boys and Girls Club of Greater Washington.

VA VS MD ON TAX FRONT: If Marylanders think they recently heard a loud boom to our south, they are not mistaken. It came from Virginia, where Gov. Terry McAuliffe fired a warning shot across the bow of Maryland’s elected leaders. McAuliffe, a Democrat, pledged to cut his state’s corporate income tax rate from 6% to 5.75%, which would increase the gap between his state’s tax rate and Maryland’s, which stands at 8.25%, economics professors Pavel Yakovlev and Kanybek Nur-tegin write in a op-ed for the Sun.