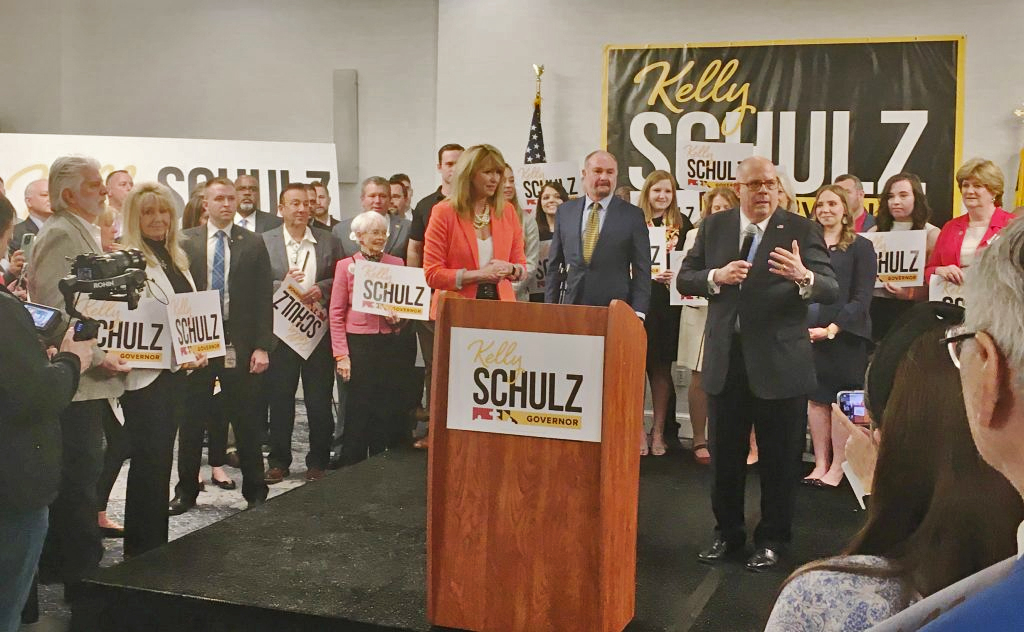 HOGAN BACKS SCHULZ FOR GOVERNOR: Outgoing Gov. Larry Hogan on Tuesday threw his official endorsement behind fellow Republican Kelly Schulz for Maryland’s next governor, citing their years of close political collaboration and calling Schulz the only candidate able to “continue the legacy” of his two terms in office. Bryn Stole/The Baltimore Sun.

PEREZ’s ‘BLUEPRINT FOR WOMEN’ AND NEUMAN EXCLUDED: Democratic candidate for governor and former U.S. Labor Secretary Tom Perez and his running mate, former Baltimore City Councilwoman Shannon Sneed, held a rally in Annapolis on Tuesday, launching their “Blueprint for Maryland Women,” and Laura Neuman, the only woman running for the Democratic nomination for governor and a late entrant into the 2022 campaign, said Tuesday that she has been unfairly excluded from the Maryland State Education Association’s endorsement process. Josh Kurtz/Maryland Matters.

BAKER POLL FINDS BAKER IN SECOND, FRANCHOT WITH SOLID LEAD: Four months out from Maryland’s gubernatorial primaries, a poll conducted for Rushern Baker’s campaign shows a four-way battle among Democrats — with Comptroller Peter Franchot holding onto a solid, but not overwhelming, lead. Franchot was the choice of 23% of Democrats surveyed. Baker, a former two-term Prince George’s County executive making his second bid for governor, was the choice of 15%. Bruce DePuyt/Maryland Matters.

SECRET MESSAGES, GROCERY STORE BOOZE AMONG ISSUES THAT STALLED: As the Maryland General Assembly’s annual 90-day lawmaking session grinds into its final three weeks, there remains plenty of time for politicians to hammer out deals and line up votes on everything from leadership’s major priorities to a backbencher’s most modest proposals. But with crossover day passed, what priority issues have fallen by the wayside? Bryn Stole and Scott Dance/The Baltimore Sun.

GAS PRICES DROP AT THE PUMP: Maryland’s first-in-the-nation gas tax holiday appears to be working. The price of gas has dropped significantly since state leaders rushed into law legislation intended to shield motorists from Maryland’s 36-cent-per-gallon tax on fuel. On Friday, the day the tax holiday took effect, the average price for a gallon of regular in Maryland stood at $4.17, according to AAA. On Tuesday, it stood at $3.78, a 39-cent decline. Bruce DePuyt/Maryland Matters.

RECREATIONAL POT MAY BE HAMPERED BY LIMITED RX LICENSES: A proposed expansion into recreational marijuana for adults could be hampered by a limit on licenses in the medical cannabis industry. The issue of licenses is expected to be a flashpoint as lawmakers consider the growth of the legal marijuana industry. All but one available medical cannabis license in Maryland has been issued. Existing growers and processors will likely want to move into an expanded market. Bryan Sears/The Daily Record.

HOW FAR CAN COURT REACH ON REDISTRICTING?A judge opened an election-year trial on Tuesday with an important legal question: How far can she go if she finds the General Assembly enacted a congressional district map that illegally disadvantages Republican voters? Jeff Barker/The Baltimore Sun.

WHAT WILL JUDGE GETTY’s ROLE BE IN REDISTRICTING DECISION? With lawsuits seeking to overturn the state’s new legislative district maps set to begin on Wednesday, and with challenges to the state’s congressional district map also likely to wind up in the Maryland Court of Appeals, the future of the court’s chief judge, Joseph M. Getty, is the object of much speculation. Getty hits the state’s mandatory retirement age for judges in just three weeks. Josh Kurtz/Maryland Matters.

ARUNDEL COUNCIL NIXES INVESTIGATIVE POWERS FOR POLICE BOARD: The Anne Arundel County Council voted down an amendment Monday night to give the county’s new Police Accountability Board investigative powers. The amendment would have allowed the board to review internal reports and evidence, issue subpoenas and interview witnesses. Dana Munro/The Annapolis Capital.

ABOUT THE NEW BALTIMORE BANNER: Can the new Baltimore Banner find and stick with a financially sustainable model? Will it’s staff be diverse enough to fill the needs of all of Baltimore’s readers? What will it’s focus and mission be when it comes to news coverage? This article attempts to answer those questions and more. Ron Cassie/Baltimore Magazine.