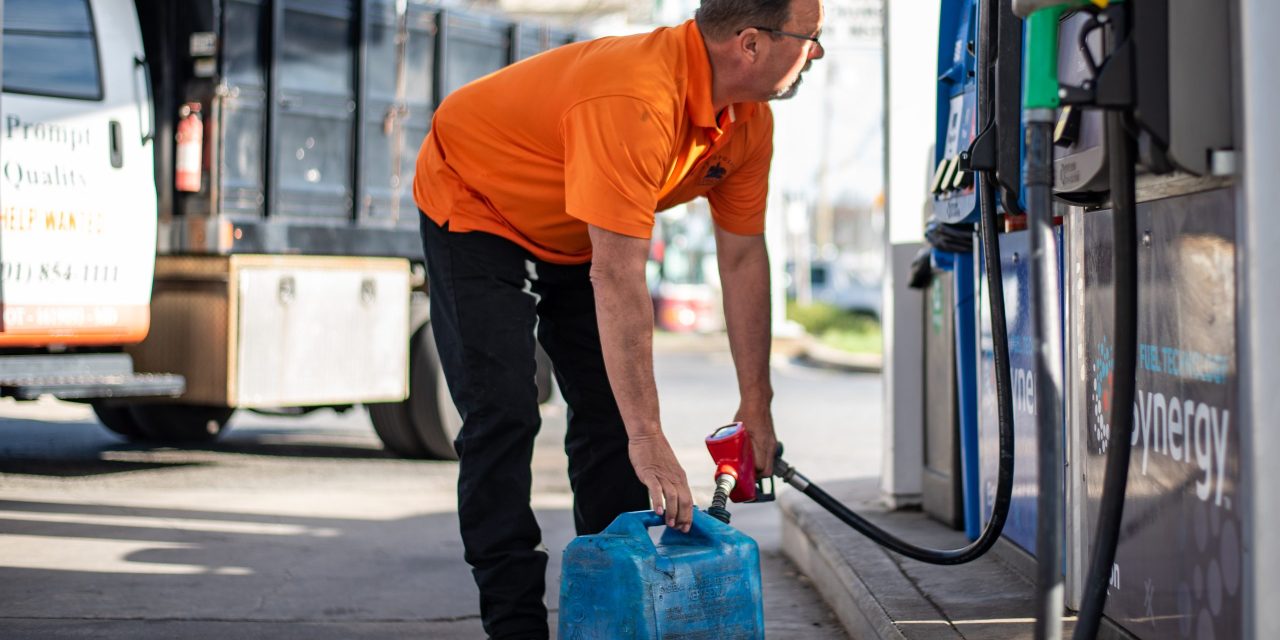 Russell Geist, filling up a gas can at an Exxon gas station in College Park Tuesday, said the increased prices have forced him to raise customer prices at his landscaping business. (Joe Ryan/Capital News Service)

BALTIMORE –  Hunter Williams stopped at a BP gas station in south Baltimore this week to add a little bit more to the tank. Normally, Williams, in town from Ohio to visit his daughter, would spend $40 and have a nearly full tank.

But not this time. With prices at near records, Williams was more cautious and opted for $20 worth of fuel. He only got four gallons.

Williams is like a lot of motorists these days. He said he finds himself making tougher financial decisions now and driving less.

“You know, I can’t take a routine run to the grocery store anymore like that just because of gas prices, ” he said.  “Now I’ve got to do Instacart,” a service that picks up groceries and delivers them to purchasers’ homes.

Gas prices in Maryland have risen to near record highs. The average price of gas in the state has increased by 65 cents in the past 30 days, according to AAA, from $3.56 for regular gas to the current average of $4.21.

Drivers interviewed by Capital News Service said those costs are forcing them to make tough decisions about how they spend their money, from travel to fuel purchases to recreation. 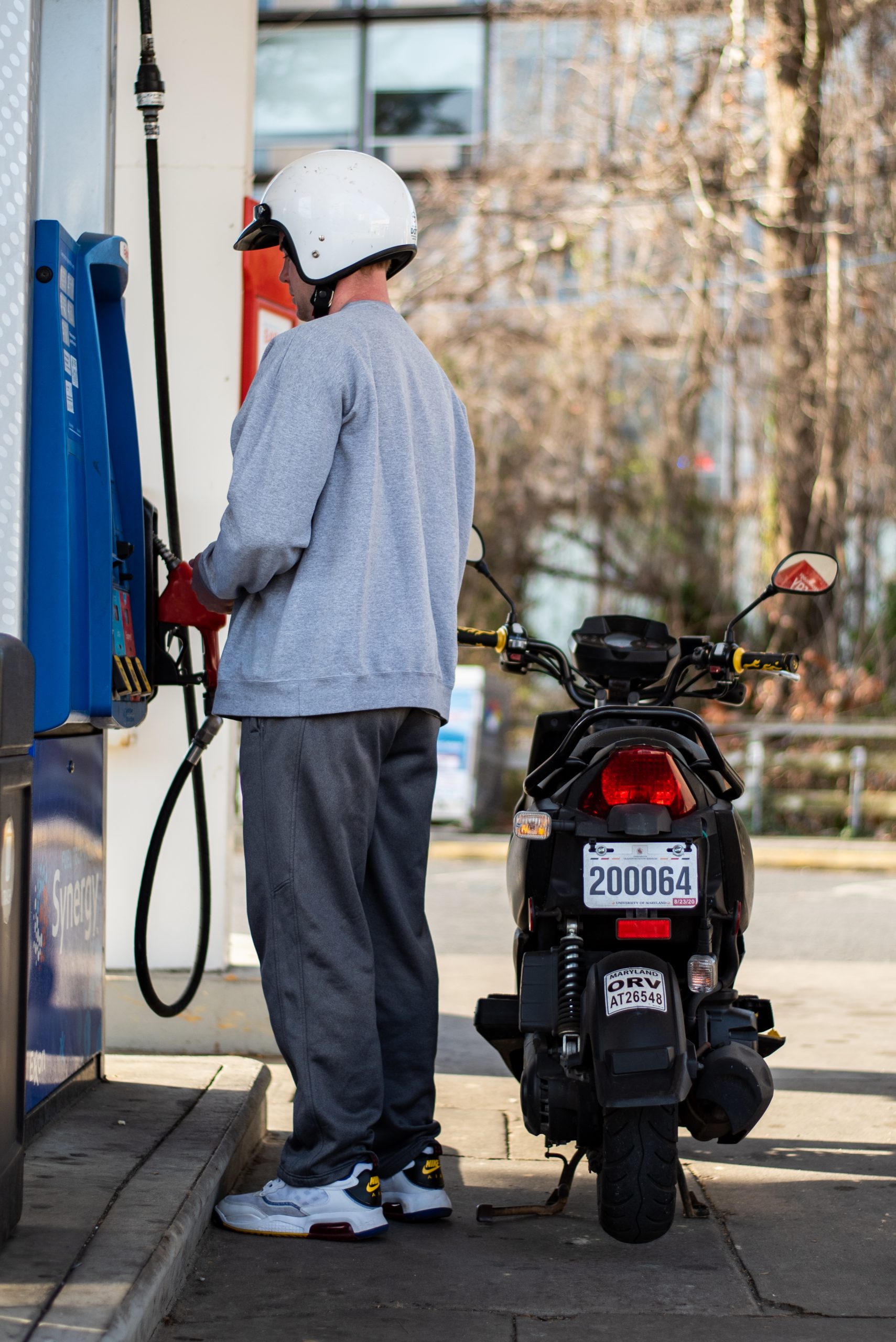 University of Maryland student King Ripley, buying gas Tuesday before heading to class, gets great mileage on his scooter, but said even he has felt the increased prices. (Joe Ryan/Capital News Service)

The good news is the state’s motorists are expected to get some immediate help beginning Friday. Republican Gov. Larry Hogan is expected then to sign into law a 30-day moratorium on the state’s 37-cent gas tax. The law goes into effect immediately with his signature, so motorists should see a same-day reduction in fuel prices, if gas station owners pass the savings onto drivers.

Russell Geist said he is feeling the pinch of higher fuel prices in his personal life and in his business.

Geist owns Metropolitan Landscaping Management Inc., where he needs gas for the company’s work trucks and gas-powered equipment in use every day. 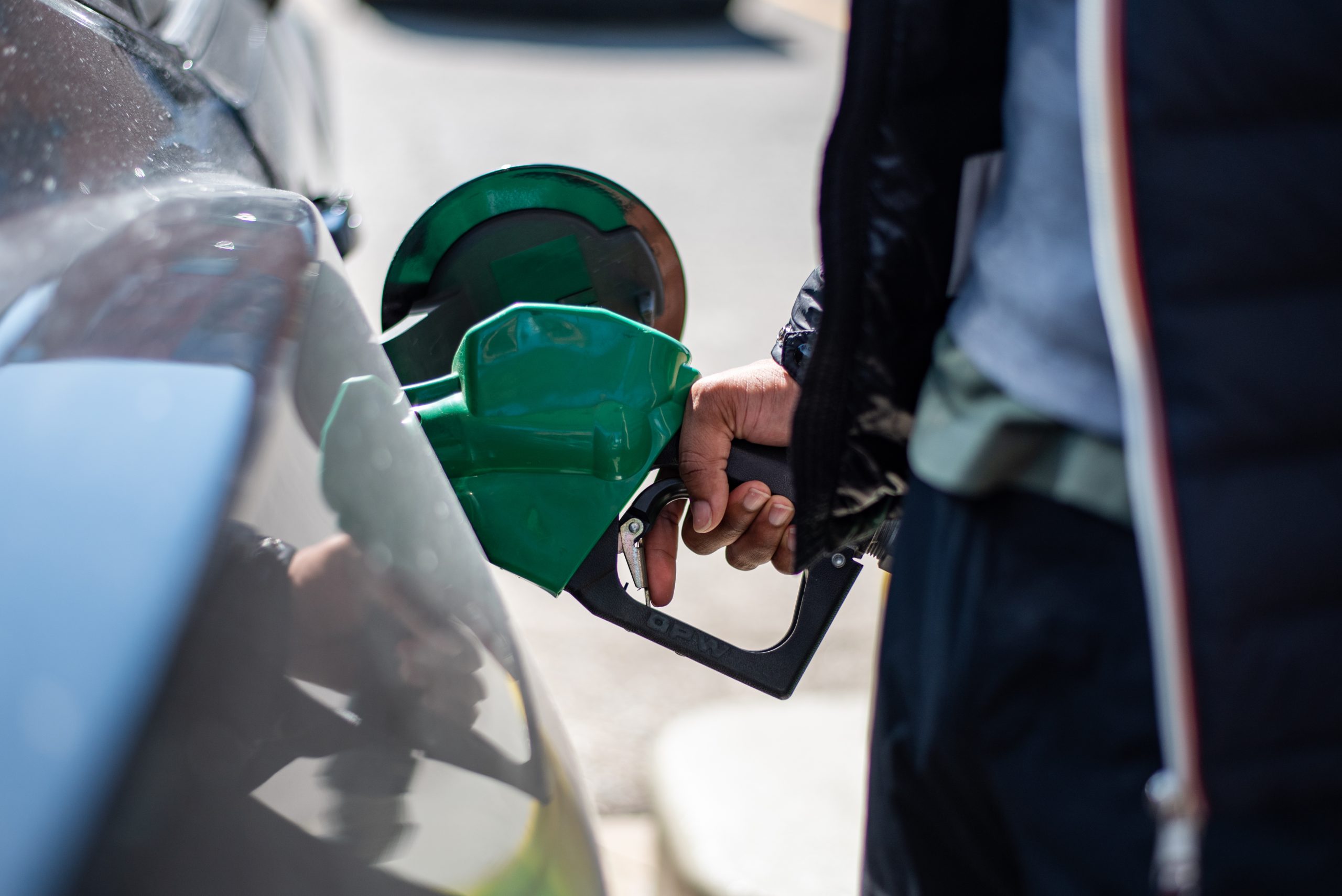 Hunter Williams, getting gas at the BP gas station in south Baltimore, said on Tuesday that spending $20 would only purchase him about four gallons. (Joe Ryan/Capital News Service)

“I work for residents who are already being squeezed by all of this inflation,” he said, “and I have to inflate my prices as well, because it costs me more to do business.”

Gas prices have been rising since January as relations between Russia, a major global source of crude oil, and Ukraine became unstable.

However, prices spiked after Russia invaded Ukraine on Feb. 24.

Between the weeks of Feb. 28 and March 7, U.S. gas prices rose by 13%, according to an analysis of data from the U.S. Energy Information Administration,

and between March 7 and March 14 prices shot up again by another 5%, the agency’s data shows.

Still, as Linda Ramirez pumped $15 worth of gas into her car in Bethesda, she said it was worth higher prices to help Ukraine.

“I believe it’s a good idea, because they’re helping Ukraine as it’s suffering,” Ramirez, 22, said, “But … (the government) should always look out for us as well.”

Geist also said increased gas prices are worth it to support Ukraine, but he said the government could still do more to help lower costs.

“I don’t think we’re totally utilizing all the ways we can help to keep the prices down,” he said.

Williams said there’s not much he can do to reduce his fuel burden because of his location.