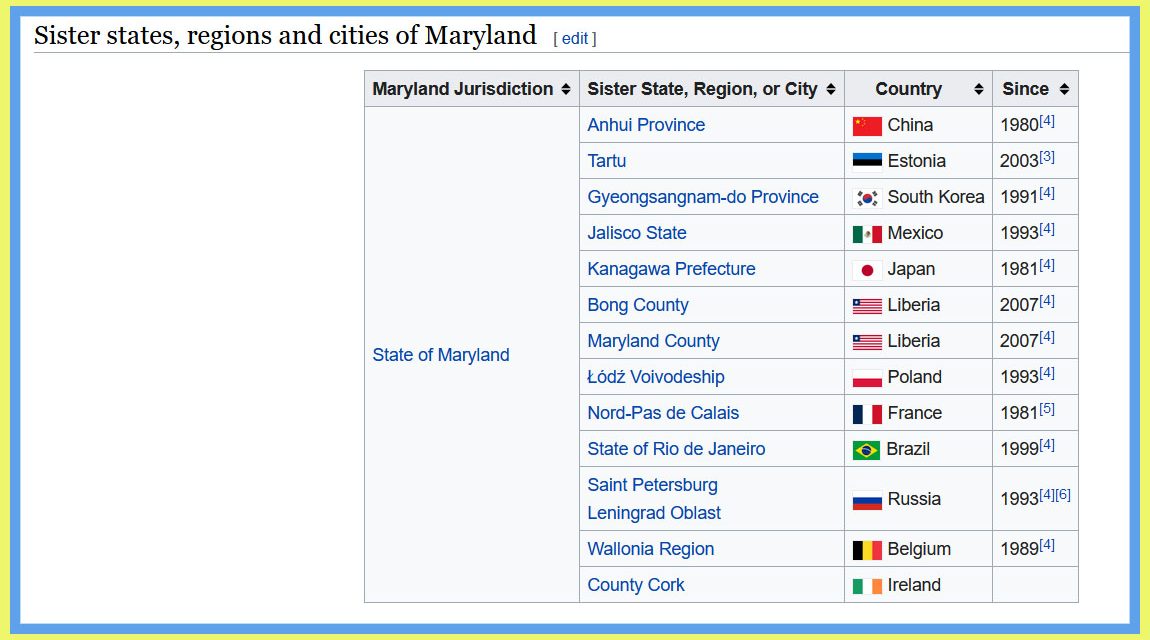 Maryland is ending its symbolic relationship with a Russian region, seen here on the list of Maryland sister state and cities. Screenshot/Courtesy Wikipedia from Creative Commons License 3.0.

MARYLAND MOVES TO SEVER TIES WITH RUSSIA OVER UKRAINE INVASION: Maryland has terminated its largely symbolic “Sister State” relationship with the region that includes the Russian city of St. Petersburg due to Russia’s ongoing invasion of Ukraine. Gov. Larry Hogan sent a letter to Aleksandr Drozdenko, the governor of Leningrad Oblast, on Monday that cited “the duty of every government to remain vigilant of unlawful acts against public order, democratic principles and innocent civilians.” Bryn Stole/The Baltimore Sun.

WHAT YOU SHOULD KNOW ABOUT END OF SCHOOL MASK MANDATE: Maryland’s statewide masking mandate for schools lifted Tuesday, with some school systems immediately pivoting to an optional face coverings policy. What do you need to know? Lillian Reed/The Baltimore Sun.

STUDENT ACHIEVEMENT LAGGING: The Maryland State Department of Education released more data last week on student achievement, offering a sobering look at how the pandemic has affected school systems across the region. The scores come from the first Maryland standardized tests given since the beginning of the pandemic. Lillian Reed/The Baltimore Sun.

COUNTY EXEC GARDNER TO ATTEND STATE OF UNION VIRTUALLY: When President Joe Biden takes the dais at the front of the U.S. House chamber Tuesday night for his first State of the Union address, Frederick County will have at least one interested observer — even if from a distance. County Executive Jan Gardner (D) will be Democrat U.S. Rep. Jamie Raskin’s guest for the speech scheduled for Tuesday night. Gardner will attend virtually because of attendance limits in the House galleries. Ryan Marshall/The Frederick News Post.

OP-ED: PENSION IDEA PENNYWISE, POUND FOOLISH: A recent op-ed in the Washington Post argued that “Maryland is wasting its pensioners’ money” by investing system assets in a diversified portfolio rather than simply investing the $70 billion portfolio in a couple of index funds.  Doing so would cost the Maryland State Retirement and Pension System, and ultimately State taxpayers, billions of dollars in lost investment earnings. Of even greater concern, the proposal would significantly increase the risk to the portfolio. Martin Noven/Maryland State Retirement and Pension System.

PARKWAY RENAMED TO HONOR ABOLITIONIST, INSPIRATION FOR ‘UNCLE TOM’S CABIN:’ Montrose Parkway in Montgomery County will be renamed Josiah Henson Parkway to honor the 19th-century Methodist preacher who became an abolitionist after escaping enslavement on a plantation in present-day North Bethesda. Henson’s 1849 autobiography inspired Harriet Beecher Stowe’s popular 1852 novel, “Uncle Tom’s Cabin,” credited with building support for the anti-slavery movement before the Civil War. In addition to being an abolitionist, planners said, Henson led 118 people out of enslavement to Canada as part of the Underground Railroad. Katherine Shaver/The Washington Post.