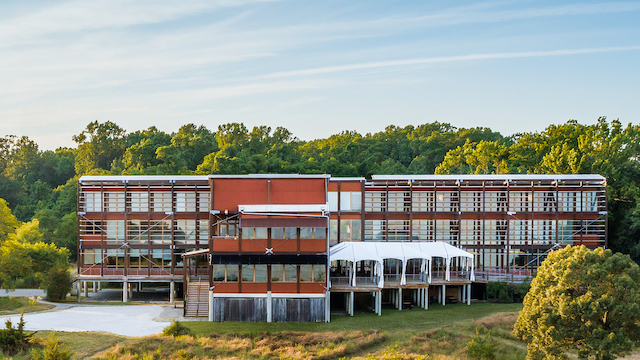 ANNAPOLIS – The renewed effort by Maryland Democrats to push sweeping climate legislation through the General Assembly has hit one of its first major challenges, with commercial real estate representatives balking at the bill’s major alterations to building efficiency standards and questioning the affordability of the proposed changes.

The Climate Solutions Now Act of 2022, the Senate version of a cross-chamber environmental legislation push, would prohibit newly-constructed buildings beginning in 2024 from using fossil fuels for heating and hot water and existing buildings over 25,000 square feet to reduce greenhouse gas emissions to net zero by 2040.

Representatives for the commercial real estate industry argue the new standards would be too costly for developers and that the changes are unrealistic to be accomplished on the timeline lawmakers have set.

The debate is expected to continue at a hearing Friday before the House Environment and Transportation Committee for a bill, HB831, sponsored by Del. Dana Stein, D-Baltimore County, which features many of the same building efficiency provisions.

The developers’ objections illustrate the tension between what many agree is a need to act on climate change and the cost of taking aggressive action to combat building emissions. Commercial real estate representatives argue the bill does not do enough to incentivize owners to make buildings more energy efficient. 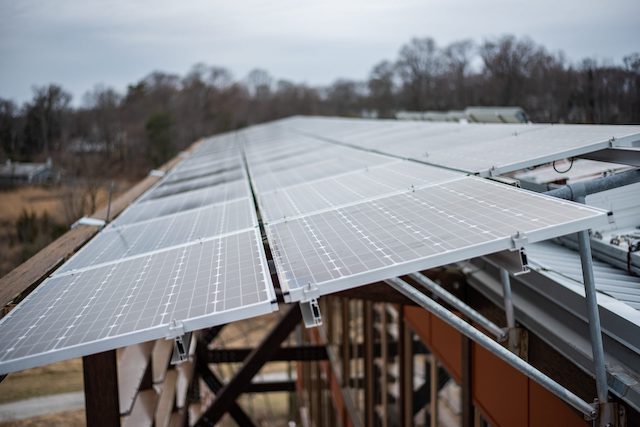 With the use of solar panels on the roof of the Philip Merrill Environmental Center in Annapolis and other environmental retrofits, the building uses 57% less energy than a standard office building and can save up to $80,000 annually, officials with the Chesapeake Bay Foundation said. (Joe Ryan/Capital News Service)

Real estate representatives and some lawmakers say that is not good enough.  They note the bill already has penalties for building owners if they do not meet the new environmental standards, but does not offer specific financial incentives to help them transition to lower carbon emissions.

Michael Powell of NAIOP Maryland, which lobbies on behalf of the commercial real estate industry, told Capital News Service that the Senate bill should have concrete incentives for owners to reduce building emissions instead of a working group to study potential incentives.

Sen. Paul Pinsky, D-Prince George’s, the lead sponsor of the bill, said he has discussed possibly adding specific financial incentives to his bill, such as tax credits, but said the working group is the more appropriate venue to consider feedback from all stakeholders about potential incentives.

Pinsky briefed the Senate Finance Committee on the bill last Friday. At the hearing, Sen. Benjamin F. Kramer, D-Montgomery, questioned the costs and logistics of the retrofitting needed to comply with stricter energy standards.

Kramer, who owns commercial real estate buildings, said  many large buildings were designed specifically to use oil and natural gas. The cost and logistical challenge of large retrofitting projects would be immense, he said.

“Where is the money going to come from?” he said. “(Lawmakers) already fight and scrap for every penny in the budget.”

If specific incentives were included in the legislation, he said, they would help ease some of the concerns of the commercial real estate industry. 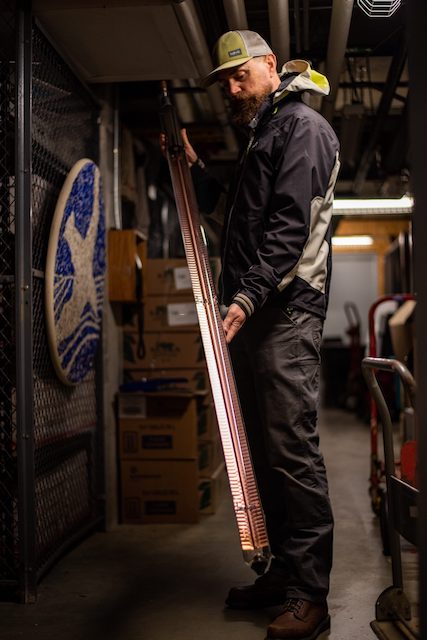 Cory Deere, facilities manager for the Philip Merrill Environmental Center in Annapolis, holds a glass tube used to heat water on the roof of the building. The Chesapeake Bay Foundation touts the building as a success story of green infrastructure, using 57% less energy than a similar office building, according to the organization. (Joe Ryan/Capital News Service)

Michael Hindle, co-owner of the Maryland-based high performance building consulting firm Passive to Positive, does not buy the argument about the barrier of costs from the commercial real estate industry. Instead, he said real estate leaders should consider the long-term value of an investment in more efficient buildings.

Hindle agreed that retrofitting projects can prove difficult, and said allowing tax incentives could be a fair way to encourage building owners to achieve the emission cuts.

Hindle, who has worked on new construction and retrofitting projects across the country, emphasized the social cost of not taking action to tackle greenhouse gas emissions.

Building owners can reduce emissions by undertaking creative solutions that do not involve overhauling a building’s structure, he said.

“The greatest obstacle to achieving this in a cost-effective way is the resistance of the developers and professionals,” Hindle said. “They’ve got to get in the ballgame and start solving the problems.”

The Chesapeake Bay Foundation, which is backing the legislation, touted its own 32,000-square-foot Maryland office in Annapolis, the Philip Merrill Environmental Center, as an example of a successful investment in green infrastructure.

The center uses 57% less energy than a comparable office building, and the organization sees an annual energy savings of between $67,000 and $80,000, Josh Kurtz, the executive director of the Chesapeake Bay Foundation Maryland, said in an email.

During testimony, Kurtz said he did not have an estimate of the cost of the multiple renovation projects to the Annapolis office. He told the committee and Capital News Service that once he had an estimate, he would supply the number.

Pinsky has repeatedly said he is open to amendments to the legislation, and told Capital News Service that he would continue meeting with commercial real estate lobbyists.

Powell said conversations with lawmakers have not yielded any solutions, but industry representatives continue to air their issues with the bill.