A mother helps her daughter put on a face mask. Photo by August de Richelieu for Pexels.

HOGAN PUSHES STATE ED BOARD TO RECONSIDER MASK RULE: The Maryland State Board of Education will consider Tuesday whether to alter or lift an emergency regulation mandating the use of face masks in schools after facing pressure from the governor. Lillian Reed/The Baltimore Sun.

REFERENDUM SOUGHT TO ALLOW GROCERIES TO SELL WINE, BEER: The latest push to get wine and beer in Maryland grocery stores could involve putting the measure up to a vote in November. Del. Lily Qi, D-Montgomery, and Sen. Cory McCray, D-Baltimore, have filed bills that would put a referendum to lift Maryland’s blanket ban on beer and wine in grocery stores, in the form of an amendment to the state’s constitution, on November’s ballot. Johanna Alonso/The Daily Record.

OPINION: MARYLANDERS NEED BETTER ACCESS TO ABORTION PROVIDERS: Today, more than two-thirds of Maryland counties do not have abortion providers. To protect Marylanders’ access, we are sponsoring the Abortion Care Access package, which embodies the same tried and true strategies that we have used to address access issues for other health-care services. This legislative package not only protects access, but it also seeks to ensure that Marylanders of all income levels have equal access to abortion care. Del. Ariana B. Kelly and Sen. Delores G. Kelley/The Washington/Post.

WHERE DO LEGISLATORS CALL HOME? Maryland will have a new set of state legislative districts for the next election regardless of how court challenges against the recently adopted map shake out — leaving some incumbents and challengers alike wondering whether they live in the district they’re vying to represent. Regardless of who ends up in which district, one of the questions that voters will face on their ballots in November is whether Maryland should change its rules for how to determine where a candidate “lives.” And lawmakers are considering still more tweaks in the 2022 General Assembly session. Bennett Leckrone/Maryland Matters. 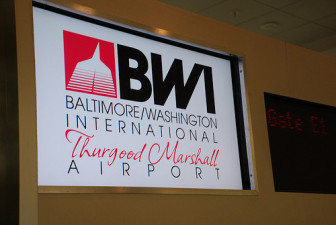 SPIRIT-FRONTIER MERGER CAUSES CONCERN OVER FARES, SERVICE: The recently announced merger between Frontier Airlines and Spirit Airlines will create the second-largest airline carrier at Baltimore/Washington International Thurgood Marshall Airport, but some critics say the proposed combination carrier would affect fares and service adversely. In addition, the merger could hit a roadblock with the U.S. Justice Department, which already has taken aggressive steps against other airlines for what it sees as anti-competitive business practices. Julia Rosier and Ross O’Keefe of the Capital News Service/Maryland Reporter.

COME FOR THE SLOTS, GET THE SHOTS: A vaccination clinic at the Maryland, Live! Casino in Hanover is part of the latest effort by Maryland officials to entice those who have not yet received a booster dose of the Moderna or Pfizer-BioNTech vaccines, which have proven effective in shoring up the immune system against covid-19 — including new variants — as protection conferred by earlier doses wanes. About 74% of people in Maryland are vaccinated, but less than half of that group have been boosted. Peter Jamison/The Washingon Post.

FREDERICK BILL WOULD HONOR FIREFIGHTER: Frederick County Executive Jan Gardner has asked members of the county’s delegation to the Maryland General Assembly to support a state bill that is partially named for firefighter Battalion Chief Joshua Laird, who died in August battling a two-alarm house fire. The bill would require that a certain type of pipe and tubing be used for gas piping systems when building new residential or commercial buildings or replacing gas lines in older construction. Jack Hogan/The Frederick News Post.

OPINION: BUILD BACK BETTER FOR LOCAL SCHOOLS, ROADS: President Biden’s Build Back Better plan has brought national attention to our aging infrastructure. That is good, but critical infrastructure is a core responsibility of our state and county governments, and it is time they lived up to that responsibility. Angie Boyter/Maryland Reporter.

HOGAN NAMES TWO FOR HIGH COURT: Gov. Larry Hogan announced the appointments of two judges to the state’s highest court. Harford County Circuit Judge Angela Eaves and Judge Matthew Fader of Howard County have been appointed to the Maryland Court of Appeals. Eaves, who is the first Hispanic judge appointed to the court, would succeed Judge Robert McDonald and Fader would succeed Judge Joseph Getty upon his mandatory retirement in April. The Associated Press/The Baltimore Sun.

OPINION: CAN AN IMPORTANT ECOSYSTEM BE SAVED? Nobody knows quite how long these tidal freshwater swamps on the Delmarva Peninsula have been here, but it is most likely several thousand years. Now, the emerald ash borer beetle invasion could upend its entire ecosystem. This invasive insect has killed tens of millions of ash trees in the United States and threatens millions more in its continuing path of destruction. Gabriel Popkin/The New York Times.

MARILYN MOSBY FILINGS BLAME HUSBAND, AMONG OTHERS: In a slew of court filings over the weekend, Marilyn Mosby, Baltimore’s indicted state’s attorney, points a finger at familiar malefactors that she has been saying for months have it in for her. But the most devastating accusations are aimed at her husband, City Council President Nick Mosby. Fern Shen and Mark Reutter/Baltimore Brew.