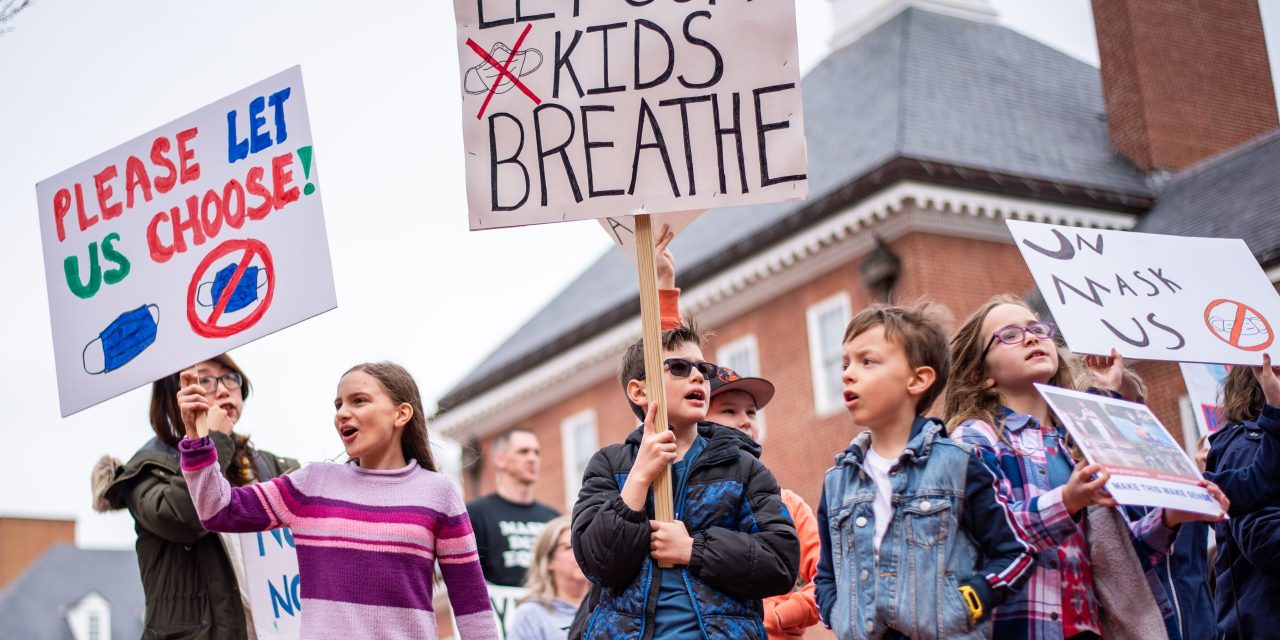 Children protest against the Maryland Board of Education’s mask mandate Feb. 17 outside of the State House. The board Tuesday lifted the mandate in response to parents and lawmakers and as levels of COVID-19 cases dropped around the region. Photo by Joe Ryan/Capital News Service)

The Maryland State Board of Education Tuesday lifted the statewide mask mandate for public schools, allowing the state’s 23 county school boards and Baltimore to each decide how they want to handle masking.

The board’s decision, which could begin as early as March 1, affects more than 880,000 students in the state’s 1,428 public schools. Before the change can take effect it must be approved by the Joint Committee on Administrative, Executive and Legislative Review, a mixed panel of state legislators. The committee announced it will meet to review the board regulation Friday afternoon.

The board had been under pressure from some parents and lawmakers, including Gov. Larry Hogan, R, to drop the mandate. In a letter to the board dated Feb. 10, the governor cited increased vaccination rates throughout the state and declining positivity rates as a basis for potentially repealing the mandate.

Hogan acknowledged the board in a response to today’s action.

“I want to thank the State Board of Education for heeding our call to rescind its school mask policy,” Hogan said in a statement Tuesday shortly after the board’s vote. “This action aligns with the data and the science, the recommendation of the State Superintendent of Schools, and the guidance of medical professionals across the country.”

Board members voted 12 to 2 to hand the decision on masking back to local jurisdictions after hearing from a mix of parents and a school board member from Carroll County asking them to rescind the policy.

“We sat back for a whole year watching our children’s mental health and education deteriorate during school shutdowns,” Idleman said. “Now we’ve had to sit back for another six months watching the same thing happen with the masking of our children.”

Under the board’s previous policy, local superintendents could lift the mandate if at least 80% of students and staff at a school were fully vaccinated, or if the county had sustained 14 consecutive days of moderate or low transmission rate of coronavirus cases.

The Centers for Disease Control and Prevention continues to recommend universal indoor masking by students, staff, teachers and visitors to K-12 schools, regardless of vaccination status.

Efforts to repeal the mandate have been ongoing.  Dozens of people gathered at the State House last week to demand the board rescind its policy.

Not every parent, however, wants masks to go away.

Katja Fort Rhoden, who was passing by the rally outside the State House, said her son and family will continue to wear masks. Fort Rhoden said masks have been an important tool to fight diseases ever since her son was diagnosed with a rare respiratory disease.

She has not been able to send her son back to school in Howard County since the pandemic began, she said.

“One of the reasons that my son could not return to school is because of inconsistent health factors and not being able to count on every parent or every individual being responsible for their own individual health to protect their neighbor,” she said.