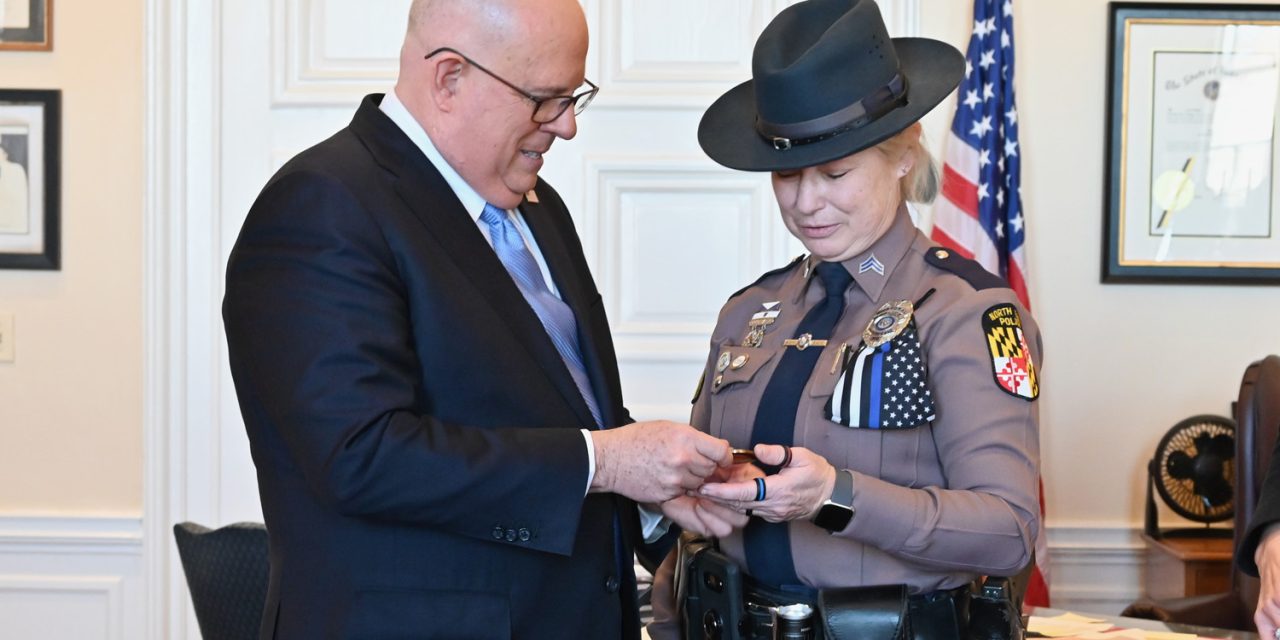 Cpl. Annette Goodyear, right, the North East police officer who pushed a child to safety as a car sped through a crossing walk last week, is honored for her quick actions and bravery during a visit with Gov. Hogan this week. She was slightly injured when the automobile hit her. Photo by Joe Andrucyk of the Governor's Press Office.

HOGAN NIXES RUN FOR U.S. SENATE: Gov. Larry Hogan, R, announced Tuesday that he will not run for the U.S. Senate, ending the Republican Party’s best chance of flipping the seat now held by Sen. Chris Van Hollen, D-Md. His surprise announcement at the end of a press conference touting the state’s continued recovery from the omicron variant put to bed two years of speculation of a Hogan candidacy after a campaign by national GOP leaders to lure him into the race. Stephen Neukam/Capital News Service in Maryland Reporter.

BILL WOULD EXPAND PUBLIC FINANCING TO MORE OFFICE SEEKERS: State lawmakers are considering a bill that could lead to public financing opportunities to candidates for courthouse positions and county boards of education. House Bill 488, sponsored by Del. Jessica M. Feldmark (D-Howard), would allow local governments to expand public campaign finance programs to include more elected offices after the program is available for at least one election cycle to county council and county executive candidates. Bennett Leckrone/Maryland Matters.

Logo from the Maryland Lottery. Click the image for more information.

BOOSTER SHOT CAMPAIGN REVIVED: Gov. Larry Hogan said Tuesday he plans to launch a promotional campaign aiming to persuade more people to get a booster shot against COVID-19, and also relaunch a lottery to reward people who do opt for the extra shot. Meredith Cohn and Lillian Reed/The Baltimore Sun.

OPINION: AFFORDABLE HEALTH COVERAGE AVAILABLE: Amid the pandemic, many people knew that if they got sick or injured, they might not be able to afford the care they need. The state recently extended the deadline to sign up for health insurance on the state’s online exchange until Feb. 28. As you look for coverage you may be surprised at the cost of premiums. In some cases, coverage is free; for many others, public subsidies make the cost of health insurance affordable. Nine out of 10 people who sign up for insurance on the state exchange get some subsidies. Howard County Executive Calvin Ball/Maryland Reporter.

STATE’s CHIEF PUBLIC DEFENDER TO RETIRE: Paul B. DeWolfe, whose name will be forever linked to the right of Maryland defendants to have counsel at initial bail hearings, will step down on June 30 after more than 12 years as the state’s chief public defender. Steve Lash/The Daily Record.

BA CO REBUTS REDISTRICTING SUIT: Baltimore County has asked a federal judge to reject a legal challenge to its redistricting map. In papers filed Jan. 31 in the U.S. District Court for the District of Maryland, attorneys for the county argue the council district map drawn by the County Council does not dilute Black voting strength. John Lee/WYPR-FM.

MO CO HIRES 1st BLACK WOMAN SCHOOLS SUPER: Montgomery County voted to hire its first woman as schools superintendent — an African American educator who was a leader during the pandemic — a milestone in Maryland’s largest school system and another marker of its ever-increasing diversity. Donna St. George/The Washington Post.

HOWARD COUNCIL TELLS SOME EMPLOYERS TO RECALL WORKERS: The Howard County Council approved 4-1 Monday a bill that requires some employers to recall to work certain employees who were laid off due to the COVID-19 state of emergency. Katie V. Jones/Baltimore Sun Media.

BLOCK CLUB OWNERS SAY LAWMAKERS OWNED BY DEVELOPERS: Club owners in Baltimore’s adult entertainment zone say the current crackdown on The Block is nothing more than a land grab by developers – and lawmakers who are in their pocket. Not true, says Maryland Senate President Bill Ferguson, who has sponsored a bill to close the raunchy row of bars and strip joints at 10 p.m. Fern Shen/Baltimore Brew.