GROUPS SEEK TO SWAY HOGAN:  Thirty-eight advocacy groups on Tuesday sent a letter to Gov. Larry Hogan calling on him to welcome Syrian refugees to the state and trust the federal vetting process for the individuals, Josh Hicks reports in the Post. Hogan last week said he would ask the Obama administration to stop sending such refugees to the state “until the U.S. government can provide appropriate assurances that refugees from Syria pose no threat to public safety.”

MAPPING DISPENSARY APPLICANTS:  Entrepreneurs want to build medical marijuana dispensaries pretty much everywhere in Maryland, writes Erin Cox in the Sun. The state’s medical marijuana commission on Tuesday released said they received more applications to grow marijuana than previously reported – 146 in all for the 15 available licenses. Another 124 applied for an unlimited number of licenses to process marijuana into something the dispensaries can sell, also more than previously reported. 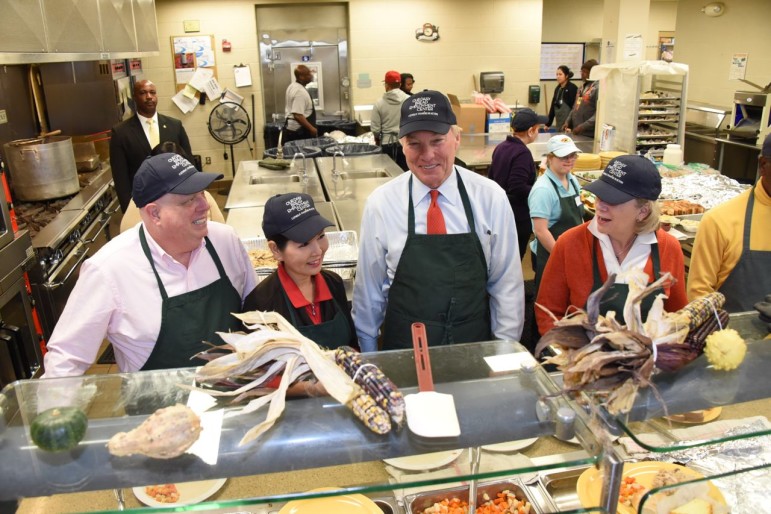 Gov. Larry Hogan, wife Yumi, Comptroller Peter Franchot and wife Anne Maher dished out the midday meal at Our Daily Bread in Baltimore Tuesday. The steroids Hogan was taking during his chemotherapy helped him gain 20 pounds, so Yumi has put the governor on a diet, he told Maryland Reporter on Monday. That will be hard to maintain during all the holiday receptions at Government House, he said, but the diet doesn’t apply to Thanksgiving Day.

IMPROVING POLICING: Improved supervision and training may improve policing more than mandatory psychological evaluations of officers, according to two experts. Bryan Sears of the Daily Record reports that the testimony before the Public Safety and Policing Workgroup cast some doubt on efforts to require additional mandatory psychological testing of police officers. Some members of the panel said there is no consensus on what such a recommendation would look like.

OFF-SHORE WIND: America’s nascent offshore wind energy industry is beginning to take shape off Maryland’s coast, and the Lower Shore is looking to get in on the windfall, Jeremy Cox writes in the Salisbury Daily Times. Business leaders, government officials and economic developers have banded together to form Lower Shore Wind Partners, a coalition they say will help position the region as a wind-energy hub.

TALBOT BOYS TO STAY: Chris Polk of the Easton Star Democrat writes that the Talbot County Council announced Tuesday that the Talbot Boys monument will remain on the county courthouse lawn despite protest and debate over the last few months.

UNION SEEKS FRICK ETHICS PROBE: Andrew Metcalf of Bethesda Beat reports that the employee union that represents more than 350 Montgomery County Department of Liquor Control  employees is asking a legislative committee to investigate Del. Bill Frick for possible ethics law violations. Frick is the primary sponsor of a bill that would set a referendum to allow voters to decide if private alcohol distributors should be able to compete directly with the DLC.

METER OPT-OUT FEE CUT: Maryland regulators said Tuesday they are concerned about the large numbers of Baltimore Gas & Electric Co. customers in low-income neighborhoods apparently opting not to have smart meters installed, as they ordered the utility to halve the $11 monthly fee charged customers who do not adopt the new technology, Natalie Sherman reports in the Annapolis Capital.

REPEALING HOWARD’S RAIN TAX: Howard County Executive Allan Kittleman plans to introduce legislation to roll back the county’s stormwater fee, Amanda Yeager reports in the Sun. Kittleman announced Tuesday that he’s partnering with County Councilman Greg Fox on a bill that would phase out the controversial fee, dubbed a rain tax by critics, over two years.

CONGRESSIONAL APP CHALLENGE: CNS’s Alessia Grunberger writes in the Daily Record that 154 House members from 39 states are challenging high schoolers in their states — including Maryland  — to create an app. The annual Congressional App Challenge is part of a larger initiative created by the U.S. House of Representatives to foster science, technology, engineering and math innovation, and is meant to underscore the growing importance of numbers-based and technology-centered skills in high schools. Backing it from Maryland are Reps. Donna Edwards,  Steny Hoyer, Dutch Ruppersberger and Chris Van Hollen.

JOBS LOSS DOWN: Daraius Irani of the Regional Economic Studies Institute writes in MarylandReporter.com that the monthly jobs report for Maryland has delivered a table of plenty, just in time for the Thanksgiving holiday. The ghoulish data from September were revised from a loss of 4,000 private-sector jobs to a loss of just 300, with private-sector gains for October totaling 12,500 jobs. Even so, the public sector has been relegated to the kids’ table for the Thanksgiving feast, as it experienced a loss of 1,700 jobs from September to October.

MARYLANDERS BACK CLINTON: John Fritze and Luke Broadwater of the Sun report that Marylanders continue to have a low level of support for former Gov. Martin O’Malley’s presidential ambitions, a new poll for The Baltimore Sun and the University of Baltimore shows. Only 7% of Maryland Democrats say they would vote for O’Malley for president, compared with 56% for former Secretary of State Hillary Clinton and 23% for Vermont Sen. Bernie Sanders.

MARYLANDERS BACK CARSON: John Fritze writes that although support for Dr. Ben Carson has slipped across the country, the retired Johns Hopkins neurosurgeon maintains a narrow lead for the Republican nomination in Maryland, the Baltimore Sun and the University of Baltimore poll has found.

TERM LIMITS IN MO CO? Twice in the last 15 years, voters in Montgomery County, Maryland’s most populous jurisdiction, have had a chance to limit the amount of time county leaders can spend in office. Twice, they have refused. Republican activist Robin Ficker, a perennial political candidate best known for having heckled visiting players at Washington Bullets games, is hoping that the third time’s the charm, writes Bill Turque of the Post.