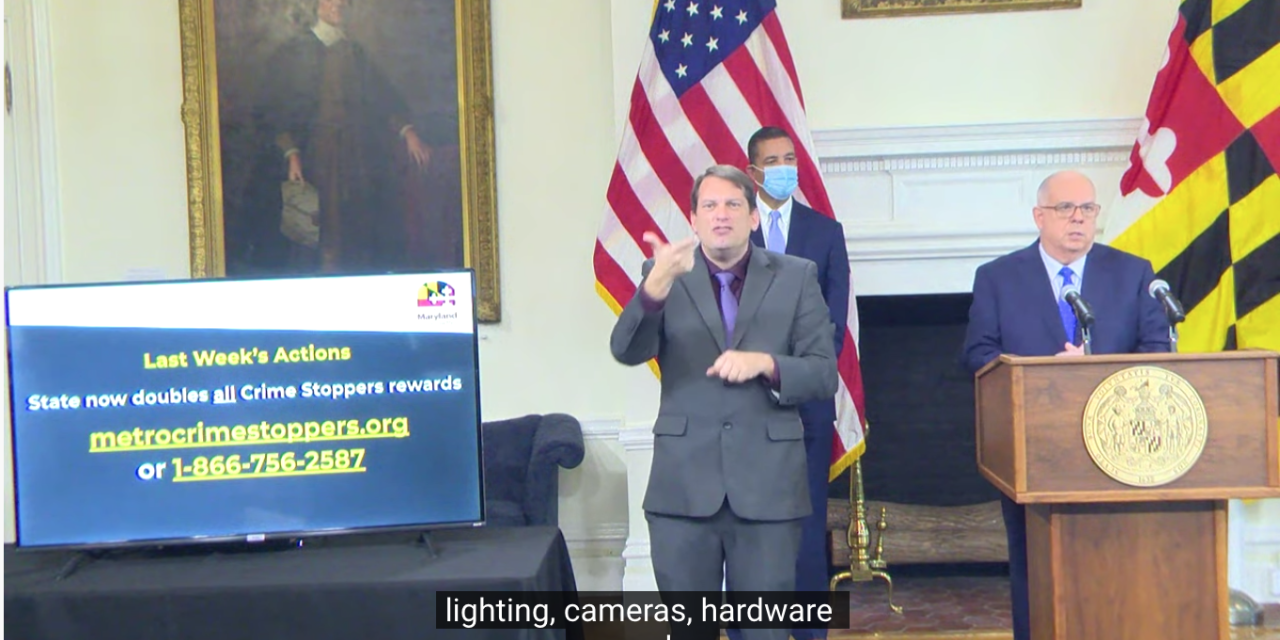 Gov. Larry Hogan said Tuesday that he has ordered the state to review the funding it provides to the Baltimore City State’s Attorney’s Office.

His announcement comes just days after the city surpassed its 300th homicide for the year and bore witness to a series of brutal killings that included a 69-year-old woman who was fatally stabbed in a church and a 13-year-old child who was fatally shot at a recreation center.

“Effective immediately, I am directing the Office of Crime Prevention, Youth, and Victims Services to conduct a top to bottom evaluation of all funding provided to the Baltimore City State’s Attorney’s Office,” Hogan said at a news conference at the State House in Annapolis.

“All of that state funding will remain pending and under review until that office provides complete data regarding the number of cases they have chosen not to prosecute and why. The number of cases plead down to lesser charges and the number of violent offenders who were given plea deals,” Hogan added.

The state has asked the Baltimore City Police Department to step-up patrols in areas of the city where violent crime is most prevalent and to “deploy lighting and traffic enforcement measures to increase visibility” in those areas, the governor said.

Hogan said he will submit emergency legislation to address violent crime that will be considered during the General Assembly’s special legislative session, which is scheduled to begin on Dec. 6.

Hogan said the legislation will be aimed at ensuring tougher sentences for those who have committed repeated acts of gun violence.

“In 2021, a staggering 82% of homicide suspects had a prior criminal record. Nearly half had prior gun-related charges and had prior arrests for a crime of violence. And yet they remained out on the streets, continuing to perpetrate these crimes over and over again.”

“Baltimore City will never get control of the violence if they do not arrest more, prosecute more, and get the most violent criminals off of the streets.”

Specifically, Hogan said he intends to reintroduce both the Violent Firearms Offenders Act and the Judicial Transparency Act during the special session. Both bills were first introduced in 2020.

And Hogan the state will do everything in its power to combat the epidemic of violent crime in the city.

“We will not stop pursuing those criminals who are terrorizing our community. And we will continue to use every tool at our disposal to make these neighborhoods safer and to get these violent shooters off of the streets.”

Senate President Bill Ferguson responded to Hogan’s remarks in a statement in which he called for “proactive solutions” to address violent crime.

“The Governor can act well-before the Maryland General Assembly reconvenes and he must do so. Marylanders need immediate solutions, like increased coordination between State and local agencies, a strengthened Division of Parole and Probation that anticipates the direct correlation between being a victim of violence and perpetrator of one, and strategies that recognize poverty shapes outcomes.

“Unfortunately, we have seen only reactive calls to action from the Governor thus far. There are proactive solutions we can work together on now and we hope the Governor sincerely comes to the table and takes more comprehensive actions going forward.”

A spokesperson for Baltimore City State’s Attorney Marilyn Mosby did not respond to a request for comment by the deadline for this story.

However, Mosby responded to Hogan’s remarks at a news conference late-Wednesday afternoon.

“For the past seven years, just like Donald Trump, Larry Hogan has used Baltimore City as a punching bag…Quite candidly, he’s been more concerned with pointing the finger at everyone else as opposed to actually leading and delivering for a city that is the heartbeat of this state.”

Analysis: A Bay bridge too many, some say