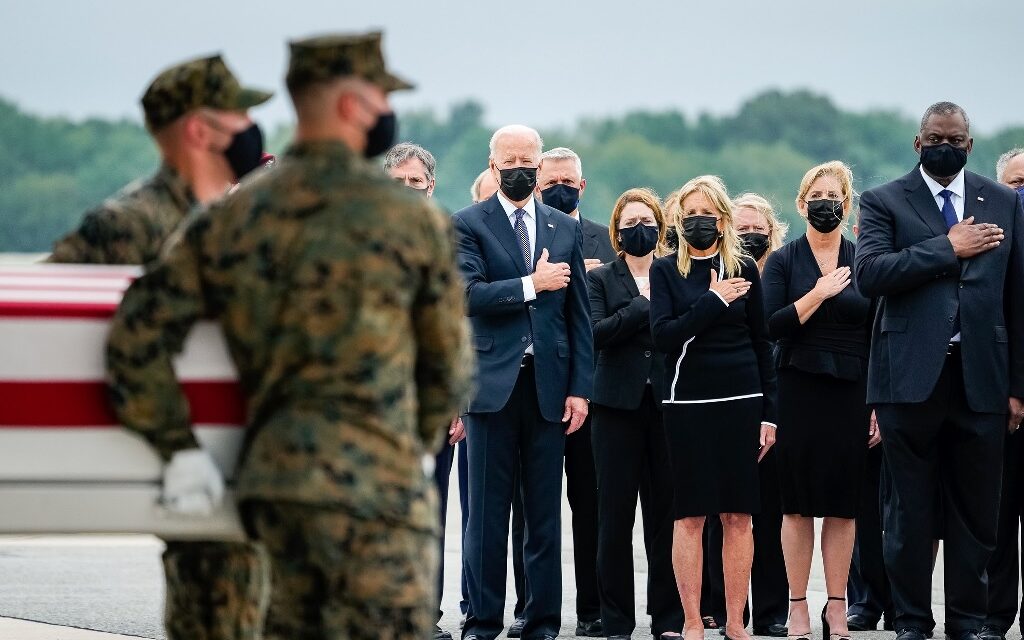 At Dover Air Force Base in Delaware Sunday, President Biden and other officials attend the "dignified transfer" of the remains of the 13 troops killed at the Kabul airport. White House photo from the president's Facebook page

“It actually hit me really hard even though I am not an Afghanistan vet. It just really encapsulated what went on for all those years that we were in Afghanistan and Iraq,” Detmer, who is now a local reporter with both the Dorchester Star and the Star Democrat, told MarylandReporter.com.

Detmer added: “I do not think that it was a stand-alone thing. It was not just one mistake or one little series of mistakes. It was reflective of the whole process. It is deeply sad. I think that it will impact recruitment.”

Below is an edited excerpt of a Veterans Day interview with Detmer. Besides Afghanistan, Detmer spoke about his combat experience, his decision to become a journalist, and challenges facing veterans.

MarylandReporter.com: You served in the Marine Corps and fought in the battle of Fallujah in the Anbar Province. What was that like?

We were there from late-August and into September. In September and October we were in the area doing route clearances for IEDs and weapons cache searches. And in November of 2004 we went into the city. There were multiple weeks of really intense fighting. It was called the biggest urban battle since Vietnam. The city had been cordoned-off for months and months. The Marines had gone in in April but the higher leadership wanted to make sure that everything was lined-up and ready.

There was really intense fighting. There were a number of casualties, both injuries and combat deaths for American and allied forces. A lot of the fighters that were there had come from elsewhere and were there to fight to the death. It was very intense.

MarylandReporter.com: What made you decide to become a journalist?

Detmer: My path has taken me to different places, from Fallujah to education and teaching, to radio news. But it is the storytelling and the connecting with people and trying to identify things that need to be talked about and talked about effectively.

I believe in a higher power. My view of Fallujah is that I was sent there and I have a story to tell about it. Being able to relate to others what happened and give them a first person perspective. I was always a history buff when I was a kid and that continued into adulthood.

MarylandReporter.com: What are some of the challenges that veterans face when they come back to the states after having been in combat?

Detmer: The dissonance between having a mission and camaraderie. Being equipped and having rules of engagement. It is just different. I think for some people it is a little bit jarring.

I felt blessed because I had this experience. And then I got on a plane to come back and kissed the tarmac. I am able to compartmentalize it to a certain extent. It is over there. It is in the past. But I know that for some people who have served and continue to serve that it is not that easy.

MarylandReporter.com: What should be done to help veterans get readjusted and find gainful employment?

Detmer: It is hard for veterans to talk about what they have done. It is hard to relate. And they do not want to brag. You will see with some of the Medal of Honor recipients that they are very humble, extremely humble. I think sometimes being humble and being reserved can lead to feelings of isolation. I think it is that isolation and stress and the impact that stress can have.

Conflicting – but correct – reports on Bay dead zones from Md. and Va. were a matter of timing