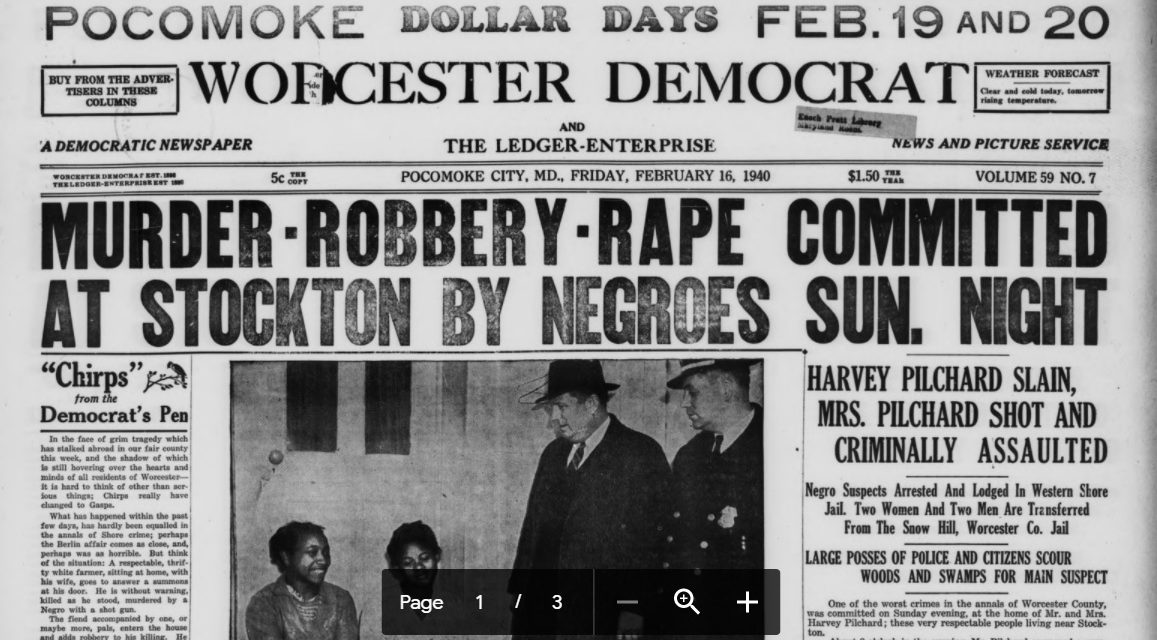 The front page of the Feb. 16, 1940 Worcester Democrat which includes a column by the editor advocating lynching. From the Library of Congress archives

From the Maryland-Delaware-D.C. Press Association:

The Maryland-Delaware-D.C. Press Association has removed Edward J. Clarke, the late editor and owner of the Worcester Democrat, from its Hall of Fame after a review of his published work revealed vile commentary, extreme racism and the promotion of lynching.

Clarke was editor and owner of the Worcester Democrat, which existed from 1921 to 1953. His personal writing and his newspaper’s coverage of a 1940 murder and assault case in Pocomoke City, Md., contained angry rants and racial attacks targeting three Black men — George B. Selby, Arthur Collick and Charles Manuel — in connection with the death of farmer Harvey Pilchard, who was white, and assault of his wife, Annie Pilchard, who also was white.

A Black woman, Martha Blake, and her teenage daughter, Lillian, were accused of being accomplices, but never charged.

The press association’s Board of Directors voted unanimously to remove Clarke’s honor on the recommendation of its executive committee after reviewing the primary materials and contemporaneous reporting.

His 1940s columns were uncovered through reporting by Gabriel Pietrorazio of the Howard Center for Investigative Journalism at the University of Maryland in their #PrintingHate series, reviewing racist media coverage of the past. An article about the Pocomoke City incident is scheduled to be published in early December 2021.

“Once we actually read his columns, the decision was easy,” said Maryland Reporter’s Len Lazarick, who is vice president of the press association. “You don’t want to judge old newspapers — which were full of systemic racism — by today’s standards, but even by 1940s standards, Clarke was more like the Ku Klux Klan than a responsible newspaper editor.”

Clarke likened the accused to “a rabid dog” and “savages” and “brutes” and “a disease-spreading germ” and “garbage.” He championed “a good stout rope, a noose at one end, good stout arms at the other, a neck and a limb of a tree” as justice to be applied to “fiends who violated the home” of the white couple.
Coverage of the case from other newspapers at the time provided a contrast to Clarke’s white supremacist tone and made clear how much Clarke aligned with racial vigilante attitudes of the time. A mob estimated to be 1,000 people broke into the jail and dragged the Blakes away. Law enforcement officers were able to rescue them from the mob.

Clarke was openly racist not just in his views, but also in opinions he shared from those who supported his positions. In one letter he published, a writer said residents of the county should “show their sympathy in a real and convincing manner” by seeing that “Mrs. Pilchard is not forced to undergo the terrible ordeal of a court trial.”

This letter writer offered to play a part in “giving the prisoners ‘the same road into the vast unknown by which they sent their innocent victims.’” Clarke published racist viewpoints with pride and leveled sharp criticism at others who disagreed.

Arthur Collick and Charles Manuel were eventually indicted for the crime and tried in Towson, rather than the Easter Shore. They were found guilty and Collick was executed by hanging at the Maryland Penitentiary in Baltimore. Manuel received life imprisonment.

The MDDC Press Association board condemned in the strongest terms the ideas expressed in Clarke’s writing and in his newspaper coverage, which also was racist.

His picture previously was removed from the MDDC Hall of Fame display in a classroom at Knight Hall at the University of Maryland. His name has been removed from the Hall of Fame listing on the MDDC website, although a link to this article and the executive committee resolution are posted on the site to be transparent about this action and MDDC’s past.

In Spring 2021, MDDC convened a committee to examine the Hall of Fame and make recommendations to the board to make the hall more inclusive and to recognize the contributions to journalism and the business of journalism by underrepresented communities.

The committee’s report will be presented to the board at its meeting Friday and will include recommendations on the physical and virtual aspects of the hall, as well as how MDDC will overhaul its recognition process for the future and try to make up for gaps in its past.

The Executive Committee of the MDDC Press Association condemns editorials and news coverage in February 1940 in which Edward J. Clarke of the Worcester Democrat advocated lynching. As owner, publisher, and author of the “’Chirps’ from the Democrat’s Pen,” Clarke advocated in issues of this newspaper for mob justice against those involved in the killing of a local farmer and an attack on his wife, likening some people to “dogs” and “savages.”

In 1954, Clarke was inducted into MDDC’s Hall of Fame. Recognizing that Clarke’s views are reprehensible, indefensible, and immoral and that his actions are antithetical to an inclusive reflection of the communities our members serve, as well as to the values of objective news coverage, the executive committee strongly recommends to the full board the removal of Clarke from MDDC’s Hall of Fame.

The executive committee has called for further investigative reporting of Clarke and will make the results of that reporting public on completion. Primary sources and contemporaneous reporting may be found here: https://libraryguides.salisbury.edu/c.php?g=1056210&p=8226479

O’Malley has a busy day in Doha, Qatar