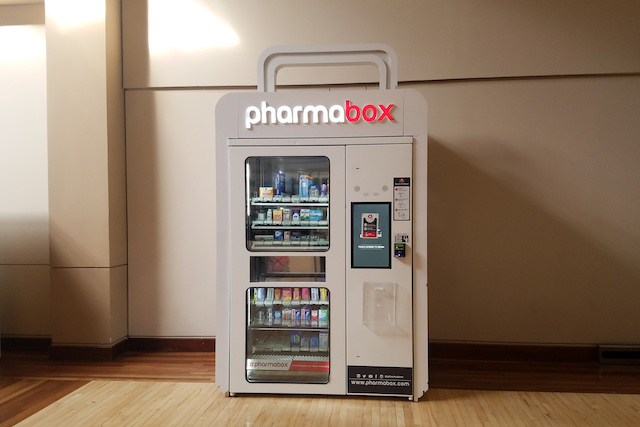 ANNAPOLIS, Md. — Vending machines in Maryland can now stock everything from allergy relief to some contraception along with candy or chips under a new state law.

Over-the-counter medications, which can be bought off of store shelves without prescriptions, were banned from vending machine sales sometime before 1957, according to fiscal analyst Amber Gundlach. Until this month, Maryland was one of only four states to ban vending machine sales of most OTC medicines.

In 1994, the Maryland Department of Health allowed a specific exception for non-prescription pain relievers like aspirin, in specific forms and in small doses, as well as condoms.

Twenty-seven years later, on Oct. 1, SB499 and HB107 went into effect, repealing the ban and removing it from regulatory code.

The new law “simply repeals the prohibition,” Gundlach wrote in an email to Capital News Service. Now, any over-the-counter drug or medicine may be sold in vending machines without the need for the state health department to craft new regulations.

There is no regulation requiring that OTC items be sold in a different machine from food and beverages.

A license must be obtained from the local jurisdiction for a vending machine; fees are $2.50 statewide.

In a February report urging that the repeal pass, bill sponsor Del. Robbyn Lewis, D-Baltimore, noted that the pandemic has revealed cracks in Maryland’s health care system. Many who live in rural areas or racially segregated urban neighborhoods live in “pharmacy deserts,” regions that lack easy access to a pharmacy.

The average Marylander lives five miles from a pharmacy, but only 5% of pharmacies are open 24 hours a day — and those that are constantly open are not spread evenly to Western Maryland or the Eastern Shore, according to a 2017 research article published in PLOS One journal cited in the report.

“In neighborhoods with low access to pharmacies and other health resources, strategically placing vending machines could help mobilize existing assets such as community centers and churches as hubs for health education,” she wrote.

Lewis also noted that OTC vending machines can decrease traffic to existing health clinics, where there is high-volume traffic of potentially sick people — a useful tactic to reduce COVID-19 exposure and spread during a pandemic.

On average, surveyed primary care physicians said that about 10% of patient visits result from minor ailments that could be self-managed, potentially with OTC medications, according to a 2011 research article by Paul A. London and Associates written for the Consumer Healthcare Products Association.

Self-managing half of these ailments could save $5.2 billion annually from taxpayers and consumers by reducing doctor visits, relieving the already strained health care system, the article estimates.

Despite the focus on equitable access to OTC medication and pharmacies, neither Lewis nor Maryland Department of Health representatives knew of any efforts in the state to bring OTC vending machines to underserved communities.

On Johns Hopkins University’s Homewood campus, a Student Health and Wellness Center hosts a “wellness-to-go” medication vending machine, according to the university’s website.

The machine dispenses everything from melatonin and emergency contraception to antibacterial ointment and itch cream, each for $8 or less, and is accessible 24/7.

University Director of Media Relations Jill Rosen said the machine was installed in late 2020 and is popular among students. It is not accessible to the public, only to those with a university ID card.

Rosen did not respond to questions about how the university arranged an OTC vending machine before the state ban was repealed.

Pharmabox, an OTC medication vending machine company, calls itself the first automated system of pharmaceutical products in the country and has 46 locations nationwide.

Arundel Mills Mall hosts one of two Pharmaboxes in Maryland; the other is in a shopping center in Clarksburg. The machine, dull-white and shaped like a first aid kit, sits separated from stores or kiosks in a poorly lit center corridor in the mall.

Shoppers can peruse name-brand remedies like Excedrin, DayQuil, and Neosporin in small quantities, as well as toothbrushes, deodorant, and disinfectant spray. Information about a selected product is displayed on a touch screen before purchase.

In the three years since Maryland’s Pharmaboxes went online, the company didn’t seek to place more kiosks because pain-relief products were restricted to “travel size;” now that size and medication type restrictions are repealed, the company might look into more locations in the state, according to company representative Mariana Circelli.

In 2016, a Regulatory Review and Evaluation Report recommended that the Maryland Department of Pharmacy add a definition to the pain reliever selling exemption to distinguish a vending machine from an automated pharmacy kiosk, which vends prescribed medications.

The Department reportedly considered the comment, but decided against adding a definition because it did not believe there was any likelihood of confusing the two types of machines.

InstyMeds, a company from Minneapolis, makes automated prescription dispensing machines, which fall in the second category and were not subject to the OTC medication ban.

Robert Bang, the vice president of sales and account management, said the machines require at least one local health care provider to partner with InstyMeds and coordinate prescription dispensing.

The machine triple-checks a barcode printed at a provider’s office and accepts insurance and payment before dispensing only what the provider ordered for the user.

These machines cost much less than a full pharmacy, especially considering a $1,050 fee for a Maryland physician dispensing license and the cost of pharmacy staff and inventory, Bang said.

Bang said that Potomac Pediatrics, a primary care office in Rockville, has had an InstyMeds kiosk in its lobby for over five years, quickly dispensing everything from ear infection medicine to baby vitamins.