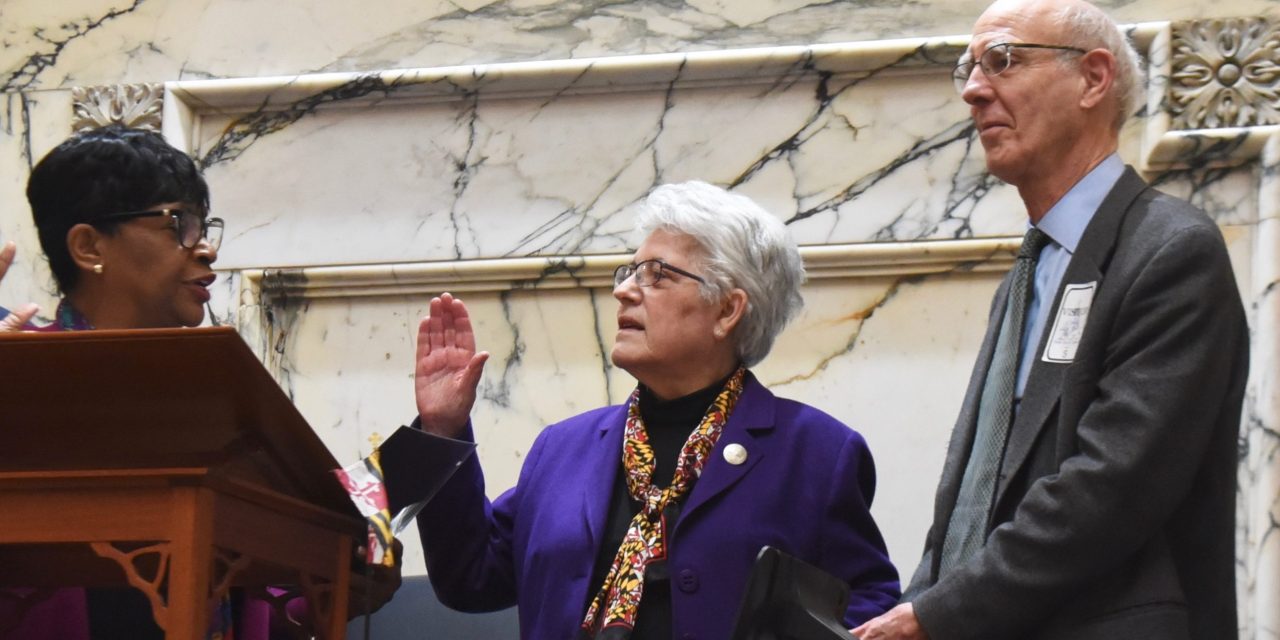 STATE TREASURER KOPP TO RETIRE AT END OF YEAR: Nancy K. Kopp, Maryland’s longtime state treasurer, announced Monday that she plans to retire from politics by the end of the year after more than four decades of public service, Pamela Wood and Bryn Stole of the Sun reports.

KOPP REFLECTS ON CAREER: In an interview with Bruce DePuyt of Maryland Matters, Nancy Kopp reflects on her long and at times trailblazing career in Maryland state government.

HOGAN DOUBLES DOWN ON CRITICISM OF ‘DEFUND’ EFFORTS: Gov. Larry Hogan Monday doubled down on his criticism of efforts to defund the police. His remarks before a joint conference of the Maryland Chiefs of Police Association and the Maryland Sheriffs’ Association in Ocean City were nearly identical to the remarks he made at a news conference at the State House on Friday in which he unveiled an $150 million initiative aimed at providing additional support for the state’s law enforcement agencies and victims of violent crime, Bryan Renbaum of Maryland Reporter writes.

SHORE RESIDENTS SEEK TO BOOST MINORITY REPRESENTATION IN REMAP: Eastern Shore residents urged members of the Legislative Redistricting Advisory Commission to boost representation for people of color in their legislative maps at a Monday evening public hearing. “It’s time for the General Assembly to recognize the changing population and growing diversity of the Eastern Shore,” Patrick Firth, of the Talbot County Democratic Central Committee. Bennett Leckrone of Maryland Matters reports.

HOGAN REDISTRICTING PANEL PROPOSES NEW MAPS: Gov. Larry Hogan’s redistricting commission has proposed a new set of maps for electing state and federal lawmakers going forward, Pamela Wood of the Sun reports. The governor’s redistricting group, which has evenly divided membership among Republicans, Democrats and independents, is seeking public comment on the maps, with an online hearing scheduled for Wednesday.

FROSH, GUN GROUP CLASH OVER COMING SUPREME COURT RULING: In dueling court papers, a gun rights group and Maryland’s attorney general differ on the consequences of a coming U.S. Supreme Court decision on the constitutionality of limits on carrying handguns outside one’s home will have on the state’s controversial licensing requirement for would-be handgun purchasers, Steve Lash reports for the Daily Record.

LIBERTARIANS PICK GOV, LT. GOV CANDIDATES: In a raucous and sometimes fun event, in a side room off a main bar, the Maryland Libertarians chose David Lashar, an IT policy professional and former Hogan administration official, to be their nominee for governor. And they nominated Christiana Logansmith, a Navy veteran and owner of a sales and marketing company to be their candidate for lieutenant governor, Josh Kurtz reports for Maryland Matters.

BIDEN TO PARTICIPATE IN B’MORE TOWN HALL: President Joe Biden will participate in a televised town hall in Baltimore on Thursday night, according to the White House, Jeff Barker writes for the Sun. It will be the Democrat’s first visit to Baltimore as chief executive, and comes during a pivotal period in his presidency.

MASS VAXX CLINICS EXPECTED TO RETURN TO BA CO: Mass vaccination COVID clinics are expected to make a comeback soon in Baltimore County to meet the spike in demand once children from ages 5-11 qualify for the vaccine. The Biden administration expects the green light for children could come next month. Once that happens, Baltimore County Health Officer Dr. Gregory Branch wants to get shots in children’s arms as soon as he can, John Lee of WYPR-FM reports.

A NEWSPAPER WAR IN THE MAKING: Jon Allsop of CJR also writes on Stewart Bainum’s plans for The Baltimore Banner, a digital-only newspaper that will take on The Baltimore Sun and its new owners Alden Global Capital. He writes that Jim Friedlich, the CEO of the Lenfest Institute, a nonprofit that owns the Philadelphia Inquirer, who has advised Bainum, said that the Banner would not be the first “meaningful civic news alternative” to rise up in a city with a struggling Alden title.