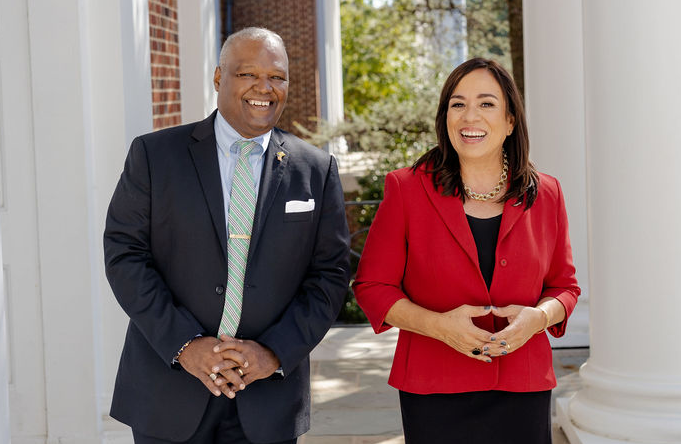 In his race for governor, former Prince George's County Executive Rushern Baker has chosen Montgomery County Council Member Nancy Navarro to be his running mate for lieutenant governor. Photo from his campaign website

MINORITY OWNERS CONCERNED OVER SPORTS BETTING LICENSES: A potential vote on three sports wagering licenses has some worried that prospective minority owners will be left out, reports Bryan Sears for the Daily Record. The Sports Wagering Application Review Commission as early as Thursday could approve the applications for three casinos — Horseshoe in Baltimore, Maryland Live in Hanover and MGM National Harbor. Some applicants, lawmakers and even members of the review panel worry that issuing licenses now could hurt minority-owned applicants, including some that are guaranteed a license in state law.

BA CO URGED TO REJECT REDISTRICTING PLAN: Taylor DeVille of the Sun reports that the civil rights groups, state legislators and activists who are calling on Baltimore County officials to reject and redraw proposed county council lines, say that the draft map, approved last month by the county’s redistricting commission, includes just one majority-Black district and keeps most of the council’s seven districts majority white — in a county where people of color now make up 45% of the voting-age population.

BGE GIVEN OK TO USE BIOGAS FUEL: Baltimore Gas and Electric Co. gained approval to use biogas — gas derived from organic sources such as food waste and lawn clippings — in its distribution system, making it the first utility to do so in the state, Elizabeth Shwe of Maryland Matters reports.

BA CO SETTLES POLICE FATALITY SUIT FOR $6.5M: Less than two years after a Baltimore County police officer fatally shot an unarmed man on Interstate 83, the county has agreed to pay the man’s family $6.5 million, attorneys said Tuesday. The payment is the second multimillion-dollar settlement paid by Baltimore County in the past two months over a police killing, Tom Jackman reports for the Post.

MO CO SCHOOLS ASK JUDGE TO TOSS VAXX LAWSUIT: Attorneys for Montgomery County Public Schools in Maryland are asking a federal judge to toss out the lawsuit filed by an employee who objects to its vaccine mandate on religious grounds, Kate Ryan of WTOP-FM reports.

HOWARD SCHOOLS HOLD BUS DRIVER JOB FAIR: In an effort to alleviate the bus driver shortage in Howard, and many jurisdictions in Maryland, the county public school system is holding a bus driver hiring fair Friday in Columbia, Erin Hardy of the Sun Media Group reports.

ON THE NOV. 2 ELECTIONS IN ANNAPOLIS: Annapolis will hold its 2021 general election on Nov. 2 where voters will choose a mayor and eight City Council members. Brooks DuBose of the Capital Gazette reports that some things will be different this year, including a new voting system in which ballots will be mailed to voters in contested primary elections and all registered voters for the general election. The number of polling locations will also change and include dropboxes where voters can safely return their ballots.