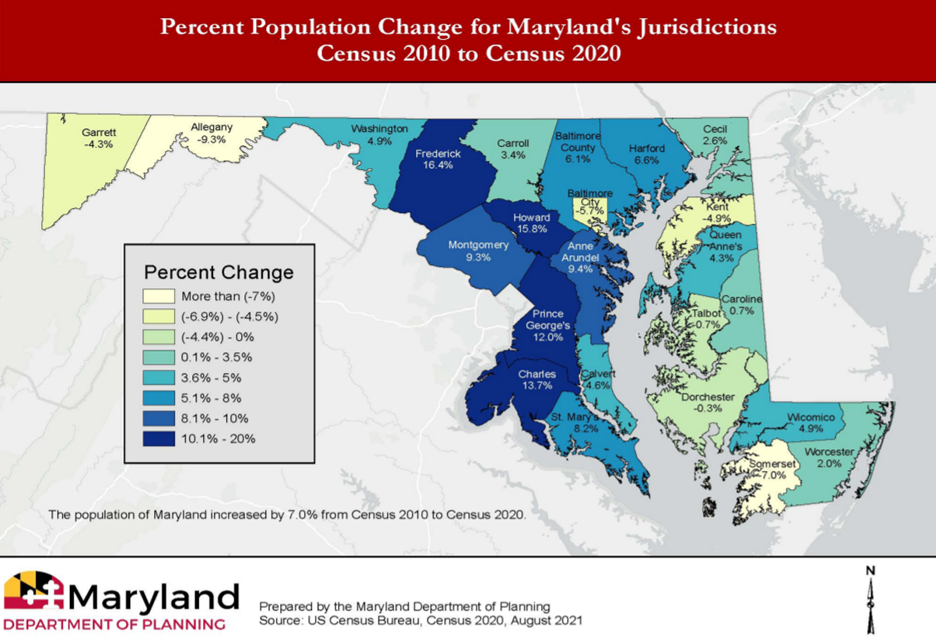 Central areas of the state saw the most growth, while some counties in the West and on the Eastern Shore lost population.

Congressional districts should be as close to zero variance of population as possible, according to Karl Aro, who chairs the Legislative Redistricting Advisory Commission.

But at the state level, “equal” doesn’t have to be as exact.

“Legislative districts, the definition of ‘substantially equal population’ allows for greater leeway in terms of meeting that one person one vote standard,” Aro said at a commission meeting last week.

That leeway from the ideal population, Aro says, is generally allowed to be as much as plus or minus 5%.

The ideal population for a Senate district in the new legislative maps will be a little over 131,000 people.

Some counties, including Montgomery and Prince George’s, have enough people to support several Senate districts.

Some counties, particularly in the West and on the Eastern Shore, will need to be combined with other counties to reach the necessary population for a Senate district.

Sen. Bryan Simonaire, R-Anne Arundel, is a member of the legislative commission.

He told Capital News Service that with today’s technology, there’s not a need for such a wide variance in population among Senate districts.

He said in the last redistricting process, the legislative map made Democratic districts underpopulated and packed Republican voters into overpopulated jurisdictions.

For instance, in a 2012 legislative map proposed by then-governor Martin O’Malley, Districts 24, 25, and 26 in reliably Democratic Prince George’s County each had populations under 118,000 people.

Districts 36 and 37, on the traditionally Republican Eastern Shore, have populations closer to 128,000 apiece.

The difference in population was “clearly done from a political standpoint,” Simonaire said. “Not from the benefit of the people in the last go around.”

A 2015 report from the Maryland Redistricting Reform Commission recommended that Maryland move to limit population variance in legislative districts to plus or minus 1%.

The report cited “extensive testimony” that the 5% rule was “used for political purposes unrelated to sound redistricting goals.”

Simonaire thinks a better map is possible this year, as long as those drawing the maps keep communities of interest as the first priority.

“If they work on avoiding the political motivation behind it – focus on distance, keep communities together, that will benefit primarily the people,” Simonaire said.

As an example, Simonaire pointed to Western Maryland, where Allegany and Garrett counties lost population.

Simonaire suggests that based on the geography and population of the area, a new map could allow for an underpopulated district there.

Sen. George Edwards, R-Allegany, Garrett and parts of Washington, expressed his support for the idea in testimony at a commission meeting last week.

“I also would suggest… that you look at the minus 5% for District 1. I think that’s fair,” Edwards said.

The executive order creating the commission includes direction for the commission to create legislative districts, “as nearly equal in population as is feasible given due regard for natural boundaries and the boundaries of political subdivisions.”

Democratic leaders in the General Assembly later announced their own Legislative Redistricting Advisory Commission, where Democrats have a larger share of seats than their Republican counterparts.

The legislative commission has not released draft maps, but announced Wednesday that they plan to do so by Nov. 15.

The Legislative Redistricting Advisory Commission is scheduled to meet Tuesday at 6 p.m. at the Earl G. Graves School of Business Management in Baltimore.