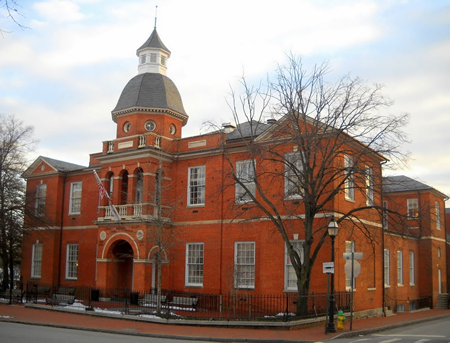 VERDICT IN CAPITAL GAZETTE CASE: Three years and 17 days after the mass shooting, an Anne Arundel County jury ruled Thursday that Jarrod Ramos, who killed five Capital Gazette employees, was sane during the attack and therefore culpable for his crimes, Alex Mann and Lilly Price report for the Capital Gazette. Ramos will almost certainly spend the rest of his life in prison when sentenced in about two months.

PUSH TO REPEAL DIGITAL TAX: Republicans in the Maryland Senate are hoping to rally public support with a legislative push and petition drive to repeal a sales tax on digital download and streaming services in the coming legislative session, Bryan Sears reports for The Daily Record.

DC SUBURB TRANSPORTATION PANEL TO RECONSIDER AMERICAN LEGION BRIDGE PROPOSAL: A transportation panel is planning to reconsider Gov. Larry Hogan’s plan to relieve traffic congestion along the Capital Beltway, Ryan Dickstein reports for WMAR. In June, the National Capital Region Transportation board voted to sideline the project but will reconsider after Hogan’s administration said it could put road projects in jeopardy including the new American Legion Bridge.

MARC SERVICE RESUMING: The Maryland Transit Administration is returning its MARC trains to pre-pandemic service at the end of August, optimistic more riders will come back after Labor Day, Colin Campbell and Bryn Stole reports for the Sun. MARC’s ridership has plunged, far deeper than for other forms of transit, during the COVID state of emergency because its core customers could clock in from home.

SAFE STREETS FUNDING ADVANCES: The U.S. House is including a request by Rep. Dutch Ruppersberger to help fund Baltimore’s Safe Streets Living Classrooms Foundation in its appropriations plan, Sinead Hawkins reports for WBFF. Ruppersberger announced Thursday that it is advancing to the full House, after passing the Appropriations Committee.

COMMENTARY: KEEP DARK MONEY OUT OF MD SENATE RACE: If Gov. Larry Hogan wants to run for Senate, Tiffany Muller writes in Maryland Matters that he should run on what he believes is the strength of his candidacy, not the bottomless pit of Sen. Mitch McConnell’s dark money machine. Muller is the president of End Citizens United and Let America Vote and is responding to an article that stated McConnell was “aggressively” recruiting Hogan and had promised significant outside spending in the race.

MOCO SETTLES POLICE CASE: Montgomery County has settled a lawsuit with a man who was kneed in the back of the head two years ago by county police arresting him for selling a type of drug that can cause hallucinations, Dan Schere reports for Bethesda Beat.

MARYLAND OUTPACING OTHER STATES IN VACCINATIONS: The state of Maryland has reached more than 7 million COVID-19 vaccines administered, the administration of Gov. Larry Hogan writes in a press release on Baltimore Post-Examiner. Maryland ranks sixth in the nation, with 57.4% of the total population fully vaccinated, it states.

LOCAL RACE COMES DOWN TO SINGLE VOTE: The race for a seat on the Mountain Lake Park Town Council came down to a single vote Tuesday, the Garrett County Republican staff reports. Unofficial results are showing a single-vote upset of incumbent Councilman Jim Moore by challenger Jeff Hovis, and the town mayor said they have completed a legal review of one ballot that had been initially deemed questionable so Hovis is the winning candidate.