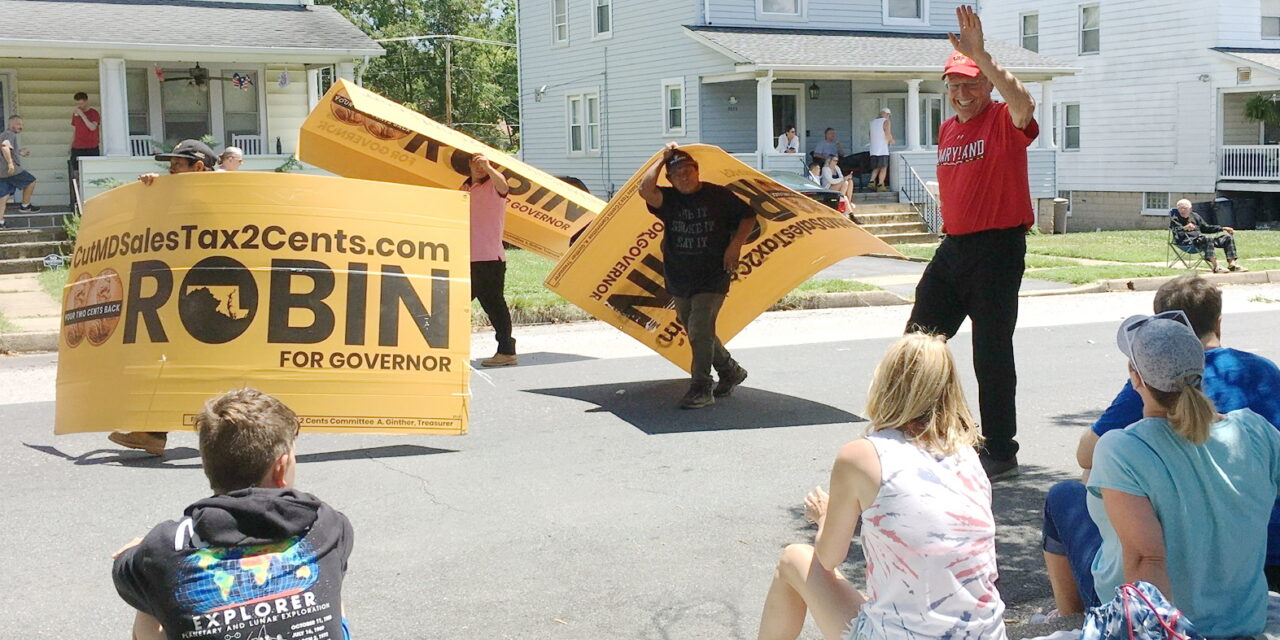 Republican Robin Ficker was the only candidate for governor in the abbreviated Arbutus Fourth of July parade Saturday, while other candidates marched in parades in Dundalk, Towson and elsewhere. And U.S. Sen. Chris Van Hollen, who is up for reelection next year, was the only Senate candidate in Arbutus. MarylandReporter.com photo

COURTS STAY HALT TO COVID JOBLESS BENEFITS: On Monday, the Maryland Court of Appeals, Maryland’s highest court, rebuffed Gov. Larry Hogan’s attempts to halt an emergency order that keeps the state enrolled in enhanced federal unemployment programs, Pamela Wood reports in the Sun. This is the third court to do so over the weekend.

MARYLAND COULD SEE MOST EXPENSIVE PRIMARY: More than six months before the filing deadline, a crowd of candidates has lined up to replace outgoing Maryland Gov. Larry Hogan, in what analysts say could be one of the most expensive primary races in state history, Ovetta Wiggins of the Post reports.

PEREZ RESIGNS FROM LAWFIRM REPRESENTING STATE: Maryland gubernatorial candidate Tom Perez resigned Friday from the Venable law firm after learning it is representing the state in its attempt to cut benefits for unemployed workers, Pamela Wood of the Sun reports. Perez, a Democrat, joined the firm earlier this year as a partner. He described his role there as “part-time.”

PERSPECTIVE: MARYLAND, VIRGINIA DIVERGE ON ASPHALT: In a column for the Post, Robert McCartney writes that “Northern Virginia has widened its main highways since 2012 by adding 53 miles of privately operated tolled express lanes. It is currently constructing 33 miles more. Across the river, Maryland can’t agree to build an inch. Does that mean the Old Dominion has a more pragmatic approach, friendly to both business and drivers? Or is the Free State just more environmentally responsible and wary of letting private companies run public services? The answer is both, and the contrast highlights a deep difference in the political climates on opposite banks of the Potomac.”

DEL. HAYNES TO LEAVE OFFICE: Del. Keith Haynes of Baltimore announced Friday night that he’s retiring from the Maryland General Assembly, Pamela Wood of the Sun reports. Haynes, a Democrat who has represented a district in Southwest and West Baltimore since the 2002 election, gave no explanation for his decision in a brief announcement.

FORMER FREDERICK BOE MEMBER RUNS FOR DELEGATE: April Miller, a former Frederick County Board of Education member, is campaigning to represent District 4 in the state House of Delegates. In a July 2 news release announcing her 2022 campaign, Miller said living through the pandemic and witnessing others struggle with the obstacles it presented compelled her to run for office, Jack Hogan reports for the Frederick News-Post.

ACTIVIST SEEKS TO BREAK ALL-MALE CONGRESSIONAL DELEGATION: A Baltimore County activist is hoping to break the all-male makeup of Maryland’s congressional delegation. Brittany Oliver, the founder of an advocacy group called Not Without Black Women, is starting a campaign Tuesday as a Democrat in the 2nd District, which sprawls across parts of Baltimore City and the counties of Baltimore, Anne Arundel, Harford and Howard, Pamela Wood reports for the Sun.

NEW BUSINESS APPLICATIONS INCREASE IN MARYLAND: New business applications increased in nearly all Maryland counties in 2020, according to data released Thursday by the U.S. Census Bureau, a rare surge during a year dominated by the coronavirus pandemic, Eric Neugeboren of the Daily Record reports.

OPINION: YUP, A JOHN BIRCHER COMING TO FREDERICK: Brian Griffiths of the Duckpin blog writes about the guest speaker of an upcoming meeting of the Frederick County Conservative Club, remarking that “having an employee from the John Birch Society talk to them at a time where Frederick County is becoming a more and more competitive county is beyond me. This kind of garbage is going to repulse undecided voters more than attract them to vote for conservative candidates.”

CARDIN PROPOSES MONEY FOR PA FARMERS TO CURB BAY RUNOFF: One request stands out among dozens made by Maryland lawmakers seeking millions in federal dollars for projects benefiting the state. In an unusual approach to a long-standing problem, Democratic U.S. Sen. Ben Cardin of Maryland told Jeff Barker of the Baltimore Sun that he wants to direct money to Pennsylvania farmers to help them curb damaging runoff that flows from the Susquehanna River into the Chesapeake Bay.

DEVELOPER SEEKS MAGLEV SUIT DISMISSAL: A developer planning waterfront housing in Westport is seeking to dismiss a lawsuit by a rail operator that says it needs the land for a high-speed maglev train linking Baltimore and Washington, Lorraine Mirabella of the Sun reports.

NEUROLOGIST: RAMOS HAS AUTISM SPECTRUM DISORDER: A neurologist testified Friday afternoon that the man who murdered five Capital Gazette employees has autism spectrum disorder, one of the diagnoses his defense attorneys are basing his insanity claims on, Alex Mann of the Capital Gazette reports.The gunman who fatally shot Gerald Fischman, Rob Hiaasen, John McNamara, Rebecca Smith and Wendi Winters falls at the mild to moderate end of the developmental disorder’s continuum, the doctor said.

OPINION: RAMOS & THE WONDERS OF PSYCHIATRY: In a commentary for Maryland Reporter, Richard Vatz opines that “Perhaps for those who are still credulous when an obviously manufactured insanity plea is cobbled together to get the accused into psychiatric treatment, only to be released when psychiatrists convince a judge that he is fine, just look at one quote of the accused (Jarrod Ramos): regarding his threatening tweets, he told his sister ‘I want them to think that I’m crazy.’”