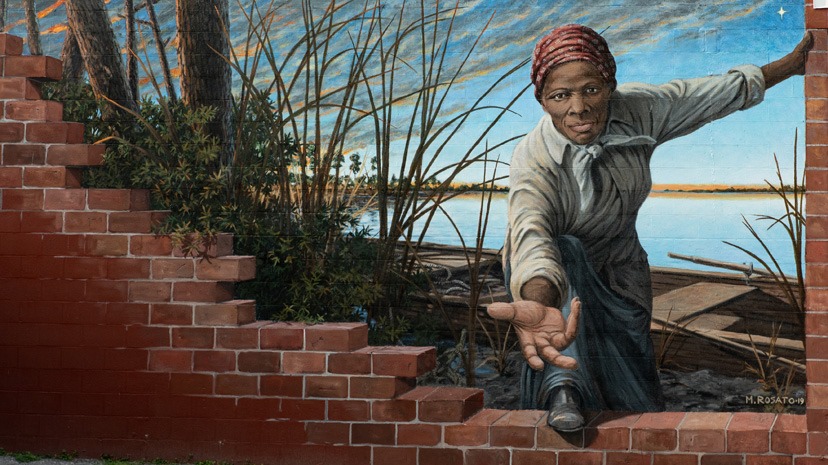 The Harriet Tubman mural at her museum in Dorchester County. In an interview, artist Michael Rosato said: “The inspiration comes from that moment when a slave has to make a decision to go. This incredibly strong and compassionate woman is about to offer that hand for that freedom. And I thought, how do I capture that moment where it all happens, when the risk was taken to run from the slave owner, to a woman taking a risk to bring you through to the other side. This is that special moment when the hand is being offered. She has to be compassionate, but has to assert a certain authority.” Dorchester County Office of Tourism photo

NEW LAWS TAKING EFFECT TODAY: While most of us flip our calendars to a new year every Jan. 1, the state government starts its new year July 1. It brings a fresh budget and hundreds of new laws. Here are some of the measures that go into effect Thursday in Maryland, Pamela Wood of the Sun reports.

SOME COVID MANDATES END TODAY: Many of Maryland’s emergency restrictions, including a statewide mask mandate, will end Thursday. Gov. Larry Hogan announced last month that Maryland would lift its COVID-19 state of emergency in two phases, with some policies ending Thursday and others after a 45-day grace period through Aug. 15, Lizzy Lawrence of the Sun reports.

BIPARTISAN EX-LAWMAKERS PUSH FOR NEW REDISTRICTING MAPS: A bipartisan pair of former lawmakers who each lost narrow elections in 2018 have formed a nonprofit group to pressure the General Assembly to accept new legislative and congressional district maps being drafted by a commission created by Republican Gov. Larry Hogan, Bennett Leckrone of Maryland Matters reports.

SOMERSET CONTINUES WITH LOWEST VAXX RATE: Rural Somerset County has struggled to reach — and then persuade — its fewer than 26,000 residents to take the coronavirus vaccine, county health officials say. As a result, the vaccination rate in Maryland’s second-least-populated county has stubbornly remained the state’s lowest, Colin Campbell and Rose Wagner of the Sun report.

POTENTIAL COX GOV CANDIDACY COULD SHAKE UP GOP: Maryland Republicans hoping for an unprecedented third consecutive term controlling the governor’s mansion will have to contend with the potential for a deeply divisive primary. Bryan Sears of the Daily Record reports that a filing by Del. Dan Cox, R-Carroll and Frederick, is a signal that the vocal supporter of former President Donald Trump could be entering his party’s primary for governor, resulting in a potentially bitter primary with presumptive Republican frontrunner Kelly Schulz.

POTOMAC PIPELINE COULD BE REVIVED AFTER COURT RULING: The U.S. Supreme Court sided with a pipeline company on Tuesday, ruling that pipeline projects with federal approval can seize state-owned land to build natural gas pipelines, Elizabeth Shwe of Maryland Matters reports. Environmentalists say this decision could speed construction of a controversial pipeline proposed to run through a narrow stretch of Maryland near Hancock and under the Potomac River to deliver gas to West Virginia’s panhandle.

MAGLEV, B’MORE DEVELOPERS EYE SAME LAND: The proposed $10 billion, high-speed maglev train between Baltimore and Washington and a major waterfront housing development planned in the city’s Westport neighborhood are hurtling toward a legal showdown: Both would require the same undeveloped land, Colin Campbell and Lorraine Mirabella report in the Sun.

76-YEAR-OLD HEADS BACK TO PRISON AFTER FAILING TO ANSWER PHONE: A 76-year-old grandmother serving a 24-year sentence for dealing heroin was allowed to leave last June after 16 years to serve the remainder in home confinement under the supervision of federal prison officials. Gwen Levi moved in with her 94-year-old mother in Baltimore, volunteered at prisoner advocacy organizations and started to take classes. But she is being sent back to prison because she failed to answer her phone during one of those classes, Neena Satija and Justin Wm. Moyer of the Post report.

WHAT TO EXPECT DURING DAY 3: During today’s continuing trial into the insanity defense of Jarrod Ramos, state prosecutors will cross-examine Dr. Joanna Brandt, a forensic psychiatrist hired as a “teaching witness” to explain what a mental disorder is, how it manifests, and how it presents in different individuals. Defense attorneys called her to the stand to help the jury assess psychiatrist opinion and testimony. She did not evaluate Ramos. Lilly Price reports the story for the Capital Gazette.

NATIONAL MONUMENT TO SLAIN JOURNALISTS GETS GRANTS: Legislation enacted by Congress and signed into law in December authorized the Fallen Journalists Memorial Foundation to build a memorial on federal land in Washington, D.C., to honor slain journalists. Now the project has kicked off its capital campaign, Donovan Conaway of the Capital Gazette reports. The foundation on Tuesday announced it has received two grants totaling $6 million to support the establishment of the memorial in Washington.