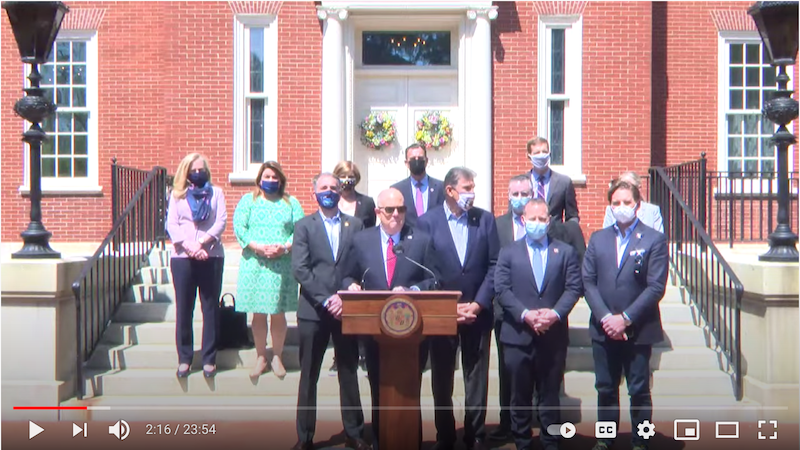 Gov. Larry Hogan hosts an infrastructure summit on April 23 outside of Government House with a bipartisan group of congressional lawmakers (Screenshot)

Lott’s remarks follow a recent Washingtonian report that said Senate Minority Leader Mitch McConnell of Kentucky has reached out to Hogan as a possible candidate to challenge Van Hollen in next year’s election. Maryland has not elected a Republican to the U.S. Senate since Mac Mathias in the 1980s.

The Senate is divided 50-50 with Democrats having the upper hand due to Vice President Kamala Harris’s ability to cast a vote in the event of a tie.

Van Hollen has served in the upper chamber since 2017. He was elected with 61% of the vote after having served seven terms in the House of Representatives.

The state’s constitution bars Hogan from seeking another term, so if he wants to run for higher office he has to either aim for the White House, which he has not ruled out, or run for Senate.

“I assume he (Hogan) would be a strong candidate because he has been a strong governor,” Lott, a Mississippi Republican, told MarylandReporter.com. “And, at least for awhile, I have not seen any recent polls-he was one of the most popular governors in the country in a state that is pretty liberal.”

Lott, 79, served on the House Judiciary Committee with Hogan’s father, the late Rep. Larry Hogan Sr., during Watergate. Hogan was the only Republican on the committee who voted to recommend to the full House all three articles of impeachment against then-President Richard Nixon. Some say that that decision may have cost Hogan the GOP nomination for governor in 1974.

Lott described Gov. Hogan as a “moderate Republican” who would be a “potentially strong candidate” for Senate. Still, Lott said that defeating Van Hollen would be a hard lift for any Republican.

“Van Hollen, he would be pretty tough too. I think philosophically he would be closer to where the state is. And he has been a popular senator. So he would be tough to beat.”

So, what are the odds that Hogan could pull a third statewide upset in deep blue Maryland?

Former Republican National Committee chairman and former Lt. Gov. Michael Steele said he is not exactly sure about Hogan’s odds against Van Hollen. However, Steele said that such a race would be “exciting as hell” to watch.

Steele ran for Senate in 2006 and lost to Democrat Ben Cardin.

Steele said that even though there is no information beyond mere chatter to suggest that Hogan might run for Senate he nevertheless finds the prospect intriguing.

“If it should come to that, I think it was would be a barnburner of a race. It would be exciting. It would be very different.”

Steele said that should Hogan decide to run he would do well to keep in mind that a Senate race is very different than a gubernatorial race even though both are statewide contests.

“Larry talked about and ran on the taxing policies of the O’Malley-Brown administration over their eight years and the negative impact that had on the state…When you are running for federal office, now you are not just talking about the economic impact on your state, but all 50 states. So it is a very different kind of conversation.”

And the issues at stake are also very different, Steele said.

“Chris picks up both the centrists and the liberal wing of the party. You are not going to have a split party around Chris Van Hollen. He is going to do well with women, especially Democratic women.”

Wynn, a Democrat, who represented Anne Arundel and Prince George’s counties in Congress from 1993-08, added: “I think Chris has done enough and is well-connected enough that he will be able to mount a fierce campaign.”

Maryland Democratic Party spokesperson Zachary Holman pressed Hogan for an answer as to his future political plans in a statement on Wednesday.

“Maryland families deserve a Governor who is solely focused on helping them recover from the pandemic, not talking with Mitch McConnell in secret about climbing the political ladder,” Holman said.  “Larry Hogan needs to give Marylanders an answer on whether he’s going to spend the next year and a half doing his job, or trying to put Mitch McConnell back in charge of the Senate.”

Progressive Maryland gets its voice back