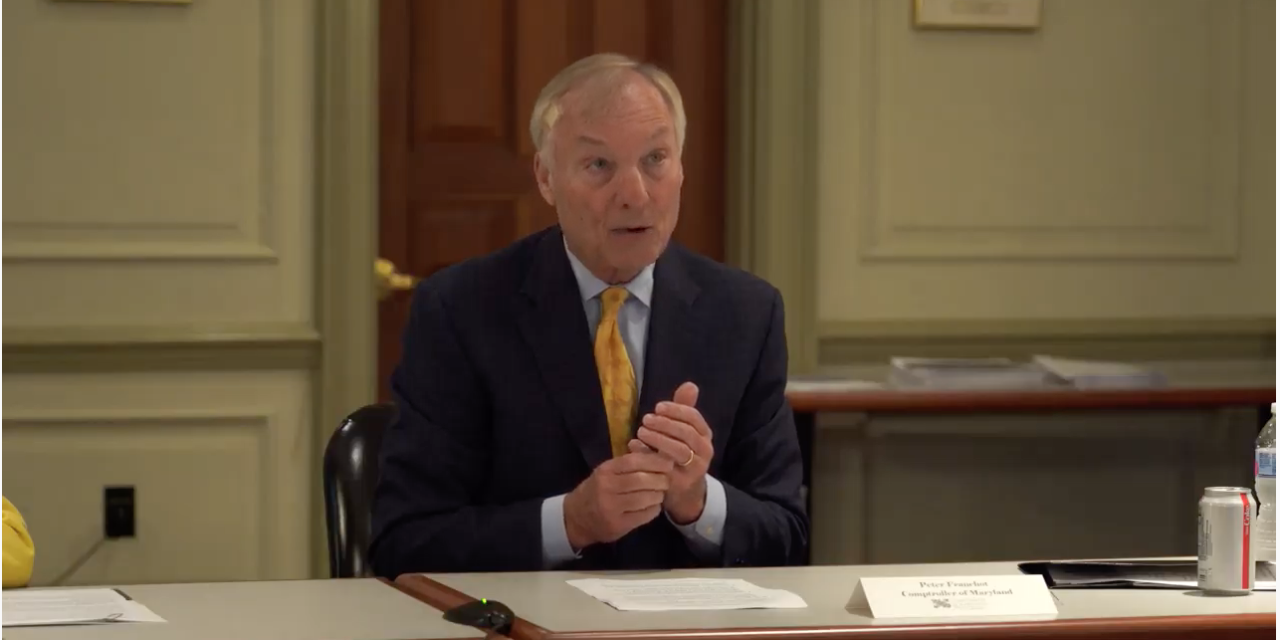 Comptroller Peter Franchot Wednesday emphasized the importance of ensuring accountability and continued oversight over the distribution of the billions of dollars in pandemic assistance that Maryland’s businesses received from both the state and federal government over the past 14 months.

“With so many taxpayer dollars being disbursed, it is both morally and fiscally prudent that we continue to evaluate these transactions to guard against waste, fraud, and pandemic profiteering,” Franchot said at a meeting of the comptroller’s workgroup on pandemic spending.

Franchot, a Democrat, has been the state’s tax collector for 14 years and is a candidate governor in 2022. He praised Gov. Larry Hogan’s administration for what he called a “commitment to work closely” with the workgroup to ensure both accountability and oversight over the relief funds.

And without said assistance, the state would have fired a dire fiscal situation, Franchot said.

“We all believe it was critical in staving off an economic calamity and was a lifeline to millions of Marylanders who found themselves out of a job, on the verge of losing their homes, and struggling to put food on the table. There is no doubt that this aid was essential.”

Sarah Sheppard, director of Education and Workforce for the Maryland Department of Commerce, told the workgroup that she was not aware of any fraudulent payments being made to the recipients of the department’s loan and grant programs for small businesses.

“We are not aware of any businesses that received payments through fraud or deception. Out of thousands of applications we have received over the last 16 months, we identified three businesses that appeared to have provided falsified documents in support of their application. After further investigation, they were denied.”

Sheppard said the department made a concerted to effort to ensure geographic equity in the distribution of relief funds and to make sure that historically underserved communities such as Baltimore City and Prince George’s County got their fair share of the funds.

But Franchot insisted that equity is still a major concern, and pointed to numbers from the department that suggest that not all counties received the same consideration for certain relief grants.

“Prince George’s County appears to have not received its fair share when compared to the other big four jurisdictions. And I see from the report that one of the metrics it uses on its report is the number of qualified private establishments per jurisdiction….Prince George’s County according to your own data has 10.7% of the total number of qualified private establishments that applied for the grant program. Montgomery had an identical percentage. Yet looking at your own figures Montgomery County received over twice as many grants as Prince George’s County despite having virtually the same number of applications received.”

Sheppard said the grant program in question operated on a first-come-first-serve basis.

“The numbers you are are based on the applicants that applied. So, if they were qualified businesses, that was how it was done, by first-in and first-out. There was no rhyme or reason in the program as to population size.”

Franchot raised similar concerns about the department’s loan program and was told by Sheppard that that that program operated on the same basis as the grant program.

Andrew Schaufele, Director, Bureau of Revenue Estimates, also questioned Sheppard and was informed by the witness that many of the equity-related problems with the programs took place during the early days of the pandemic when that issue had yet to rise to the forefront and that changes were later made.

“We didn’t really know how everybody was going to be affected by industry and by geography,” he said.  “I think we had a pretty good feeling we knew something big was coming down the pike. I am just surprised that we did not approach this from more of a policy standpoint or provide more loans as opposed to first-in and -first-out.”

Shaufele said he felt confident that the department has learned its lesson from those early days and that equity-related issues are now being addressed.

Commentary: Now’s the time to take action against urban-suburban runoff