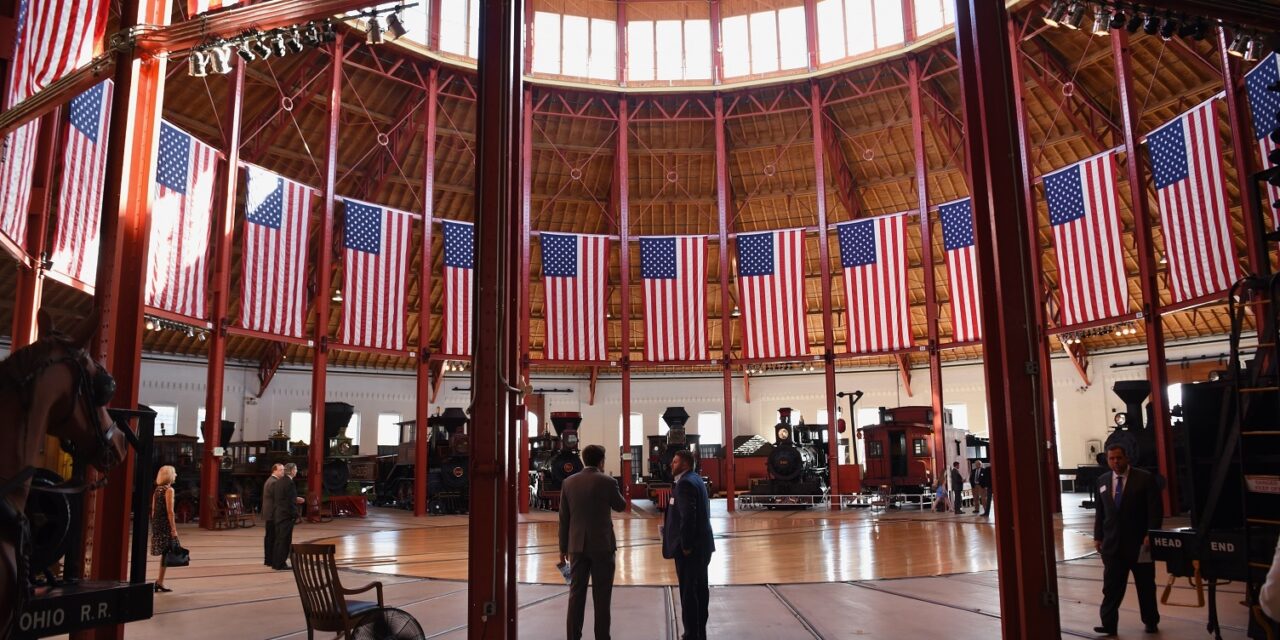 The roundhouse at the B&O Railroad Museum in Baltimore. Amtrak celebrated its 50th anniversary there last week and the state announced a new railroad tunnel for Baltimore. https://www.baltimoresun.com/business/bs-bz-bp-tunnel-renaming-groundbreaking-20210618-vbz5hboy2rc5dflivrsfpo76je-story.html The first railroad line in the U.S. ran from Baltimore to Ellicott City in 1830. Governor's Office photo.

NO NEW COVID DEATHS REPORTED: Maryland health officials reported no new deaths due to the coronavirus in the past 24 hours, the first time the state has gone a full day without any new COVID-19 fatalities since October, Phil Davis reports for the Sun. The Maryland Department of Health reported Sunday that no state residents have been reported dead from the virus in the past 24 hours. The last time the state did so was Oct. 18, 2020.

STATE BUCKS TO BOOST ENTERTAINMENT VENUES: Maryland is awarding $10 million to entertainment venues across the state that struggled during the pandemic, including the Delmarva Shorebirds, The Maryland Theatre and the Maryland Symphony Orchestra, among others, Madeleine O’Neill of the USA Today Network reports.

COLORADO FOLLOW MD IN CREATING DRUG PRICE PANEL: Colorado has become the third state in the nation — following trailblazer Maryland and Maine — to create a panel with the power to rein in prescription drug prices, Bruce DePuyt of Maryland Matters writes. As in Maryland, where the legislature approved a drug-price board in 2019, Colorado lawmakers said they wanted to provide relief to consumers, many of whom must choose between medications their physicians have prescribed and other essentials, such as rent and food.

BUSINESSES OFFER BONUSES AS WORKER SHORTAGE PERSISTS: Maryland businesses are offering bonuses to prospective employees — an effort to lure them to jobs as a worker shortage continues nationwide. The shortage comes as states continue to loosen coronavirus-related restrictions. Last week, the U.S. Bureau of Labor Statistics reported there were a record-high 9.3 million job openings on the last business day of April, Eric Neugeboren of the Daily Record reports.

AMID JUNETEENTH CELEBRATIONS, QUESTIONS REMAIN: The streets of Annapolis were flooded with chants of freedom as floats, classic cars, dancers and a marching band made their way around Annapolis City Dock and the Kunta Kinte-Alex Haley Memorial Saturday, Ada Romano of the Capital Gazette reports. It was the city’s first inaugural celebration of Juneteenth, the day Union soldiers arrived to Galveston, Texas, to inform the remaining slaves in the state of their newfound freedom.

PROBLEMS PERSIST WITH STATE JOBLESS PORTAL: Early one morning, Heather Williams got an email asking her to confirm the email she had used to sign up for Maryland’s unemployment benefits portal. But there were three major problems: Williams is employed. She lives in Canada. And she has never applied for unemployment benefits in Maryland. The mixup comes as the state of Maryland continue to grapple with thousands of unemployment claims each week. Johanna Alonso writes about the situation for the Daily Record.

EDITORIAL PAGE EDITOR OF SUN SAYS FAREWELL: In her last column for the Sun, deputy editorial page editor Andrea K. McDaniels writes about her decision to leave the Sun while recalling the work that brought about more diversity to the Sun’s pages.

CAPITAL EDITOR TAKES BUYOUT: Capital editor Rick Hutzell also is leaving, writing, “This is my final contribution as the editor of The Capital. Those are hard words to type. I had to take a deep breath as I read back over them. I came to The Capital in October 1987, and promptly told Managing Editor Tom Marquardt I planned to stay for two years and then join the Associated Press and see the world. One love of my life, Chara, two kids, two houses, four dogs, two convertibles and one Pulitzer Prize later, it’s clear I had no idea what I was talking about. I wish I could say it’s all been grand, and I’m headed off to retirement. But it hasn’t, and I’m not.”

OPINION: STRUGGLING FAMILIES TO BE AIDED BY TAX CREDIT: U.S. Rep. Steny Hoyer, in a column for Maryland Matters, writes that on July 15, “many Maryland families will begin receiving additional assistance provided by the American Rescue Plan’s historic expansion of the child tax credit. … Here in Maryland, 1,125,000 children will be eligible for this benefit – including over 132,000 in the 5th District alone.”

PERSPECTIVE: VA SHOULD BORROW KIRWAN PLANS FROM MD: In a perspective piece for the Post, Robert McCartney writes that both candidates for governor of Virginia “would do well to borrow their plans from neighboring Maryland, which approved an ambitious education package in February. National experts hail it as a model not only for investing billions of dollars in education, but also for ensuring that the extra money actually leads to improved classroom performance.”’

CARROLL TEACHER SALARIES LAG: Carroll County Public Schools educators rallied before the most recent Board of Education meeting, demanding higher pay. One reason for their demand was because of how CCPS compares to other counties in terms of teacher compensation. Data from the State Department of Education shows Carroll’s starting salary is the second-lowest of all the Central Maryland districts. And Carroll has the lowest maximum salary for the same districts.

LACK OF AC IN B’MORE, COUNTY FOR ON-LINE LESSONS: The lack of air conditioning in Baltimore City and Baltimore County schools has forced in-person lessons to go online this spring — most recently last week — as school systems continue to struggle with high temperatures in their oldest buildings, Liz Bowie reports in the Sun.

MO CO BICYCLISTS SEE A SAFER FUTURE: Bicyclists in Montgomery County are celebrating a first-of-its-kind project they say will keep them safer. A ribbon cutting was held Saturday along the protected bike lane pilot project, which has changed the look of a portion of University Boulevard in the county, Michelle Murillo of WTOP-FM reports.

BLACK DRIVERS IN BA CO STOPPED, ARRESTED AT HIGHER RATES: More than half of all drivers pulled over, searched, cited and arrested last year by Baltimore County police were Black, despite efforts to examine racial disparities in traffic stops in a county where Black residents make up less than a third of the population, Taylor DeVille of the Sun reports.