Flag in State House rotunda. Yesterday, June 14, was Flag Day, marking the date when the Continental Congress authorized the original Stars and Stripes.

OC POLICE CRITICIZED FOR USING FORCE AGAINST TEENS VAPING: Julian Mark, Paulina Firozi and Emily Davies of the Post report that last Saturday evening on a boardwalk in Ocean City, police enforcing a ban on vaping surrounded and tackled a teen as an agitated crowd gathered. Then, one officer repeatedly kneed the teen in the stomach. “Stop resisting!” one of the officers yelled. Later, police used a Taser on another man in the crowd and battled a third who picked up a bicycle.

VAN HOLLEN SEES REMOVING TALBOT BOYS STATUE PART OF NATIONAL MOVE: U.S. Sen. Chris Van Hollen, D-Md., sees removal of the Talbot Boys statue from the courthouse lawn in Easton as part of a bigger purge of Confederate symbols throughout the country. Van Hollen is also calling for an investigation into Ocean City police after social media videos show officers using a taser on a young man and physically restraining others, the Easton Star Democrat reports.

CARDIN, VAN HOLLEN CALL FOR EQUITABLE TAX SYSTEM: Maryland’s U.S. senators said changes should be made to the federal tax code so that wealthy Americans are not able to avoid paying their fair share of income taxes. However, the lawmakers stopped short of calling for a wealth tax, reports Bryan Renbaum for Maryland Reporter. Sens. Chris Van Hollen and Ben Cardin were responding to a ProPublica report about how billionaires were able to pay little or no federal income taxes in certain years by using legal loopholes in the Internal Revenue Code.

NOVAVAX TESTED NEW VACCINE ON 30,000: Novavax, a Gaithersburg-based pharmaceutical company, reported Monday that its coronavirus vaccine was highly effective against COVID-19 infections after testing in about 30,000 people, Meredith Cohn of the Sun reports.

CASA VOLUNTEERS WORK TO AID VAXX EFFORTS IN LATINO COMMUNITIES: About 50 volunteer health promoters with CASA, the largest Latino and immigrant advocacy organization in the mid-Atlantic, have been trained to assist in CASA’s efforts to monitor COVID-19 outbreaks, advise on testing, and campaign against evictions for those who had lost their jobs during the health crisis, Rosanne Skirble writes about their efforts for Maryland Matters.

D.C. AREA OFFICIAL PONDER LIFING EMERGENCY ORDERS: As new coronavirus cases continue to decline in D.C., Maryland and Virginia, officials are debating whether — and how — to lift the states of emergency that gave them sweeping powers 16 months ago to respond to the spread of the virus, Rebecca Tan and Julie Zauzmer of the Post report.

OPINION: BLAME OURSELVES FOR SLOWED VAXX RATES: In liberal-leaning Maryland, half of all residents, not just those eligible, have been fully vaccinated, and 72% of those over age 18 have received at least one dose as of Monday. Meanwhile, in conservative Mississippi, only 26% of residents have been fully vaccinated, notes the left-leaning Sun editorial board. “We can’t ignore former President Donald Trump’s role on that and its lingering effect. … We can’t help but wonder what those numbers would look like if the virus and vaccine hadn’t become such a political football.”

MD HIGH COURT REJECTS RULE TO REDUCE YOUNG OFFENDERS SENTENCES: Maryland’s top court on Monday returned to the state judiciary’s rules committee a proposal to give circuit court judges discretion to reduce the life sentences of convicts who committed their crimes before reaching age 25 and who have served at least 24 years in prison, Steve Lash reports in the Daily Record.

COAL-FIRED POWER PLANT TO SHUTTER 5 YEARS EARLY: The operator of the second largest coal-fired power plant in Maryland announced that the plant will retire next year, which is five years earlier than previously announced. GenOn Holdings plans to shut down two of its 50-year-old coal units at Morgantown Generating Station in Charles County by June 2022, Elizabeth Shwe of Maryland Matters reports.

B’MORE COUNCIL PUTS FACIAL RECOGNITION ON HOLD: The Baltimore City Council passed a bill Monday that would create a moratorium on the use of facial recognition technology, with a notable exception for the city police department.The City Council doesn’t have legal authority over the department, as it’s technically a state agency, Emily Opilo of the Sun reports. 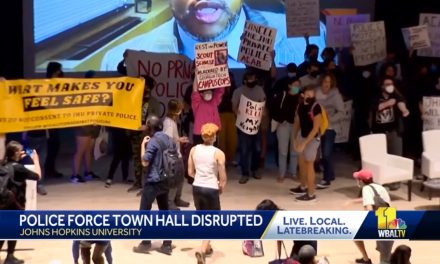