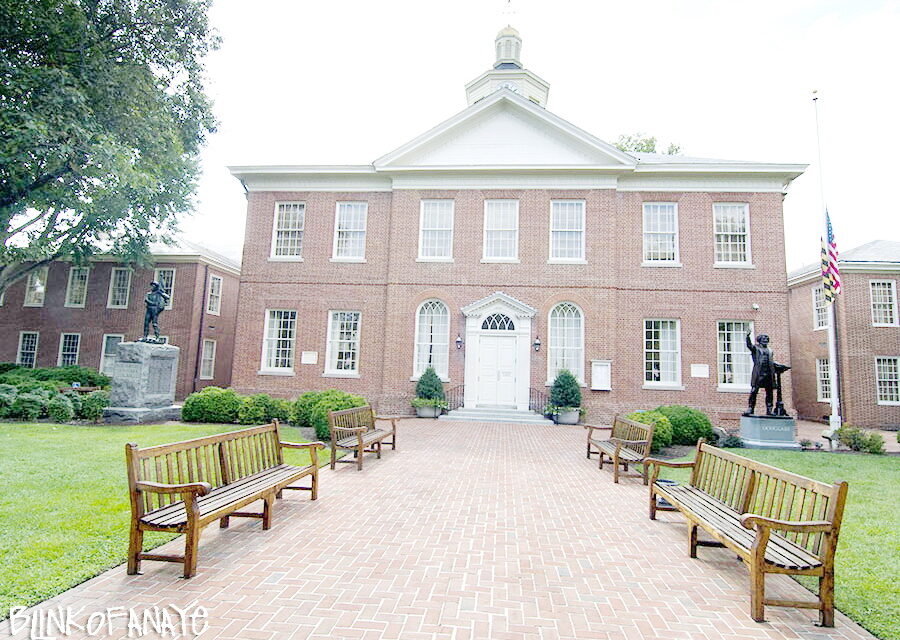 The Talbot County courthouse with the Talbot Boys Confederate statue on the left and county native Frederick Douglass on the right. A lawsuit has been filed to remove the Confederate statue which the county council has declined to do. Photo by Blink of Anaye with Flickr Creative Commons License https://creativecommons.org/licenses/by-nc/2.0/

CICADA ONSLAUGHT OF NO CONCERN OF RESTAURANTS: Many Marylanders are becoming more and more apprehensive about the prospect of millions of harmless little insects known as cicadas flooding the state in the coming weeks but the president and CEO of the Restaurant Association of Maryland is not one of them, writes Bryan Renbaum of Maryland Reporter. In fact, Marshall Weston said Wednesday that he has not heard “any restaurant express any concern about the cicadas whatsoever.”

AFTER ONLINE EXCHANGE: HOGAN, SCOTT TO MEET OVER CITY VIOLENCE: Gov. Larry Hogan and Baltimore Mayor Brandon Scott have agreed to a meeting to discuss violence in the city, Emily Opilo of the Sun reports. Scott said Wednesday that he and the governor agreed upon the tête-à-tête, which was arranged following a tense exchange Tuesday night on social media.

OPINION: IRRESPONSIBLE BICKERING: The editorial board of the Sun opines that the bickering that preceded Mayor Brandon Scott’s invitation to Gov. Larry Hogan to meet with him to talk about city crime “is not only unhelpful, it is outrageously irresponsible given all that’s at stake.”

BPW SEEKS EXPLANATION ON EMERGENCY CONTRACTS: Robert Gleason, Maryland’s chief procurement officer, was expected to appear before the Board of Public Works to explain why one in four emergency contracts related to the COVID-19 pandemic have missed a statutory deadline for review by the panel. The board’s two Democrats said they are also expecting to hear ways in which such delays can be avoided in the future, Bryan Sears reports for the Daily Record.

UMS BOARD VOTES FOR TUITION INCREASE: The University System of Maryland Board of Regents voted unanimously on Wednesday to increase tuition and dormitory fees for the 2021-2022 academic year, following a freeze on tuition and fees this year due to the coronavirus pandemic. In-state tuition will not increase by more than 2% and out-of-state tuition will not increase by more than 5%, Elizabeth Shwe of Maryland Matters reports.

SUIT SEEKS TO REMOVE TALBOT BOYS MONUMENT: A lawsuit filed in federal court on Wednesday calls for the removal of a Confederate monument that is still standing on the grounds of the county courthouse in Easton despite years of opposition from community advocates, reports Rachel Chason for the Post.

THIRD OF PG RESIDENTS 16+ VACCINATED: Prince George’s County has seen gradual progress in its effort to combat the coronavirus pandemic, with one-third of residents 16 and older now fully vaccinated and fewer than 1,000 confirmed cases, William Ford reports for the Washington Informer.

SYKESVILLE ELECTS FIRST WOMAN MAYOR: Stacy Link was well aware of the history she was trying to make in Sykesville. She said she was reminded by all the women giving her thumbs-up signs or fist pumps or blowing kisses on their way to or from the polls on Tuesday. Record-setting turnout helped Link to become the first female mayor of Sykesville, which was incorporated in 1904, Bob Blubaugh reports for the Carroll County Times.

LEGAL ACTION AGAINST FREDERICK SHERIFF: An 18-year veteran of the Frederick County Sheriff’s Office has until Friday to file an amended complaint in a yearlong lawsuit that’s accused Sheriff Chuck Jenkins and other supervisors of discrimination based on gender, Mary Grace Keller of the Frederick News-Post reports.