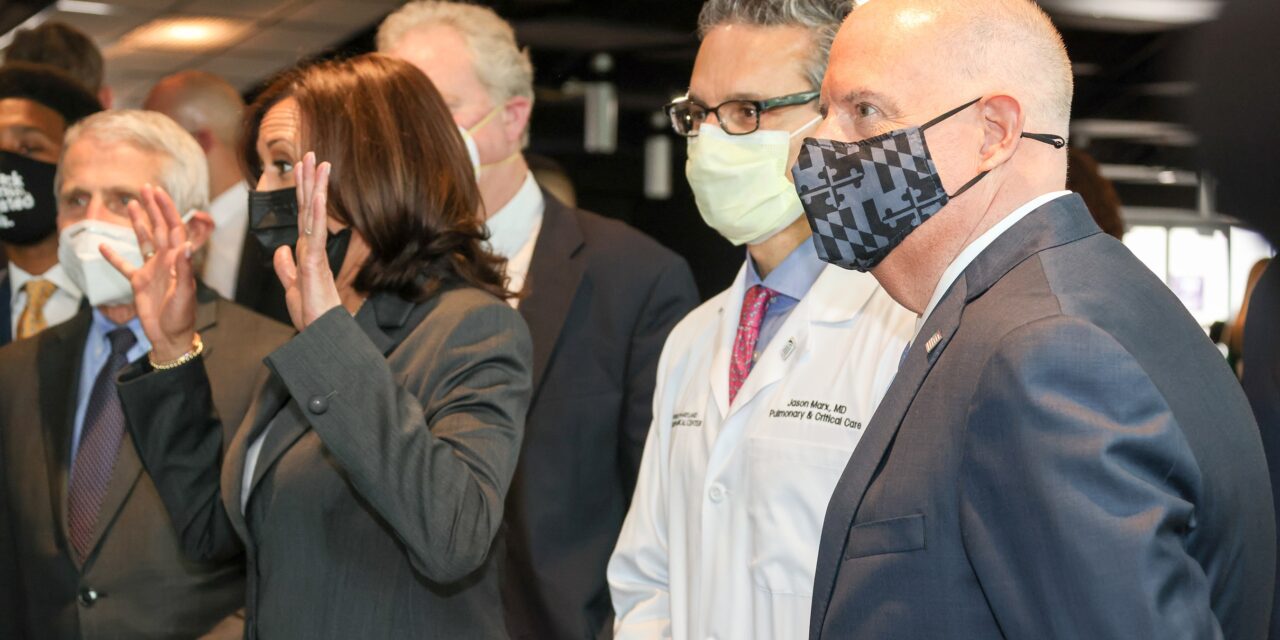 VP VISITS BALTIMORE: Declaring “Today is a good day, Baltimore,” Vice President Kamala Harris marked the 100th day of the Biden administration by visiting a vaccination site at M&T Bank Stadium in Baltimore, Jeff Barker reports for the Sun. Harris said the nation is beginning to emerge from the coronavirus crisis, even as significant economic and health challenges remain.

BIG IMPLICATIONS FOR BIDEN HEALTHCARE PROPOSAL: One of the most well-known health care lobbyists in Annapolis gave an interview with Maryland Reporter’s Bryan Renbaum in which he said it would be a “game changer” if President Joe Biden’s proposal to permanently extend enhanced health care subsidies is implemented.

COUNTIES VARY ON OUTDOOR MASKING REQUIREMENTS: Some of the state’s biggest jurisdictions were grappling Thursday with what to do about outdoor masking, now that Gov. Larry Hogan has repealed the state’s universal outdoor masking order, Erin Cox and Rebecca Tan report for the Post. In Baltimore City, Mayor Brandon Scott said it may take days to figure out a new policy, given the city’s low vaccination rates.

RESIDENCY OF LAWMAKERS COULD BE REQUIRED: Maryland lawmakers could have to live in the districts they represent under an amendment to the Maryland constitution that will go to Maryland voters for approval next year, Bryan Sears reports for The Daily Record. Sears goes into some interesting case history of failed court challenges surrounding lawmakers who had homes outside their districts, such as Sen. Clarence Blount, who lived in a condo in Baltimore County but maintained an apartment in his legislative district with no phone and little furniture.

UM STARTS VACCINATING CHILDREN IN TRIAL: University of Maryland School of Medicine researches have started to vaccinate children ages 6 months to 11 months old with the Moderna vaccine for a clinical trial, Brandon Ingram reports for WMAR.

BMORE CHILDREN, YOUTH FUND UNDER SCRUTINY: Directors of Baltimore’s Children and Youth Fund are defending their operation of the fund which is supposed to award millions of tax dollars to grassroots youth programs each year but has little transparency, Jeff Abell reports for WBFF.

CHOOSING VIRTUAL LEARNING: The families of hundreds of Harford County Public Schools students have applied to have their children take part in the school system’s virtual learning program, slated to be available for kindergarten through 12th grade in the next school year, David Anderson reports for The Aegis.