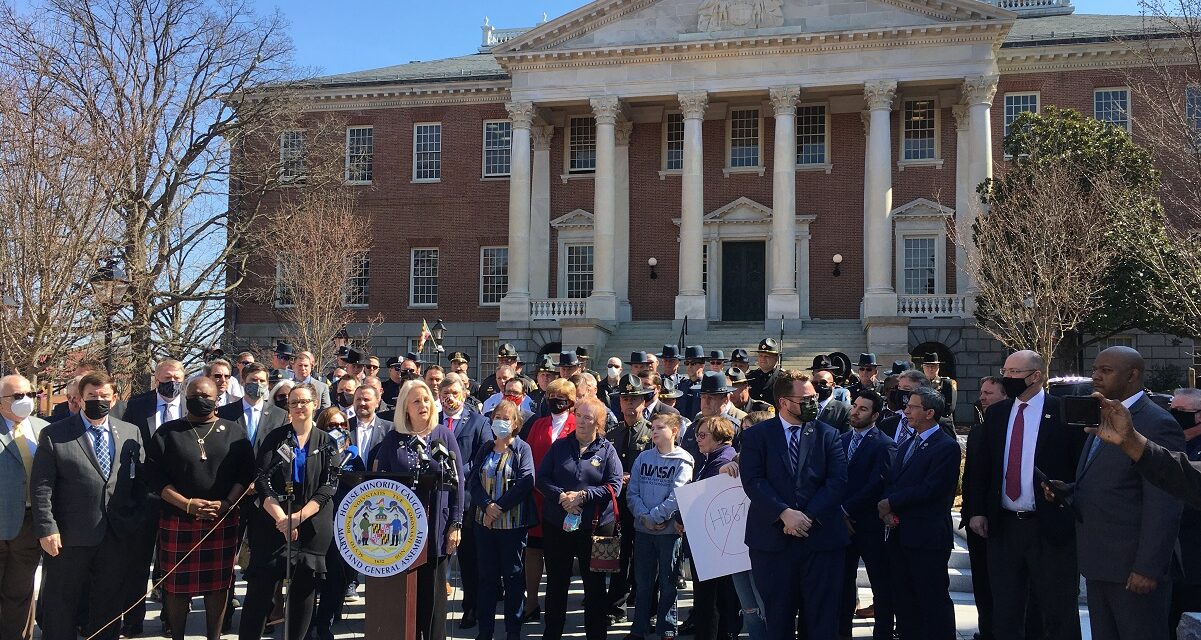 On Wednesday, Republican delegates held a demonstration against the House version of police reform being debated. They were joined by over 30 police from mostly Republican counties. MarylandReporter.com photo

STATE LAWMAKERS SLOW BUDGET WORK AS FED MONEY ASSESSED: As the U.S. House passed a $1.9 trillion federal stimulus plan on Wednesday, the Maryland House temporarily slowed work on the state budget to give appropriators time to understand the flood of federal money headed to the state, and to wrest some control over stimulus spending from the governor, Danielle Gaines and Laura Olson report for Maryland Matters.

WHAT’s IN FED STIMULUS PACKAGE FOR MARYLAND? Maryland will receive billions of dollars in federal aid in the latest stimulus package, which is expected to become law this week with President Joe Biden’s signature, Madeleine O’Neill of the USA Today Network reports. The $1.9 trillion bill includes $1,400 stimulus checks, massive expansions to federal tax credits, nearly $6.4 billion in direct funding for Maryland’s state and local governments and millions of dollars to prop up ailing transit systems and airports.

OPINION: SOME DRUNK DRIVERS DON’T GET SLAP ON THE WRIST: In an opinion piece for Maryland Reporter, Chris Swonger of the Distilled Spirits Council and Responsibility.org and Rich Leotta opine that in 2016, Maryland passed Noah’s Law, named after Rich Leotta’s late son, to mandate the use of ignition interlocks—better known as breathalyzers for motor vehicles—to be installed in vehicles owned or operated by any convicted DUI offender. Noah’s Law however contains a dangerous loophole in its ignition interlock mandate. Many first-time DUI offenders in Maryland are not sentenced to install an ignition interlock because they are granted probation before judgment.

BPW OKs SETTLEMENT ON CHILDREN SENTENCED TO LIFE: The Maryland Board of Public Works approved a settlement Wednesday that will require the state to adopt new policies regarding the parole process for people sentenced as children to life imprisonment. The settlement will require the Maryland Parole Commission, the Division of Correction and governor to adopt new regulations for the parole process, the AP is reporting.

BILL WOULD LET ATTY GEN SUE FOR CLIMATE FRAUD: One Maryland lawmaker is seeking to enable the attorney general to prosecute fossil fuel companies that have contributed to the climate crisis through fraud or deception, Elizabeth Shwe of Maryland Matters reports.

MARYLAND U.S. SENATORS SEEK TUBMAN STATUE FOR CAPITOL: Maryland’s U.S. senators are reintroducing their legislation to erect a statue in the U.S. Capitol to Harriet Tubman, the Eastern Shore woman who led slaves to freedom along the Underground Railroad, Tim Prudente of the Sun reports.

OLSZEWSKI, STATE DISAGREE WIDELY OVER TEACHER VAXX NUMBERS: The Maryland State Department of Education says that only 27% of Baltimore County teachers are vaccinated for COVID-19. But Baltimore County Executive Johnny Olszewski said Wednesday that 63% of educators have been vaccinated, Phil Yacuboski of WBAL-AM reports.

PRINCE GEORGE’S TARGETS RESIDENTS WITH VAXX: William Ford of the Washington Informer reports that the Maryland Vaccine Equity Task Force will lead an effort to make sure residents of underserved communities are treated with the Covid-19 vaccines especially in Prince George’s County and Baltimore City, where officials stressed not enough vaccines have been distributed.

ROBERT EHRLICH SR., 90, DIES: Robert L. Ehrlich Sr., a retired Ford salesman and the father of a former Maryland governor who enthusiastically campaigned for his son as a young athlete and later as a political candidate, died Tuesday at his son’s Annapolis home. He was 90, Jacques Kelly reports for the Sun.