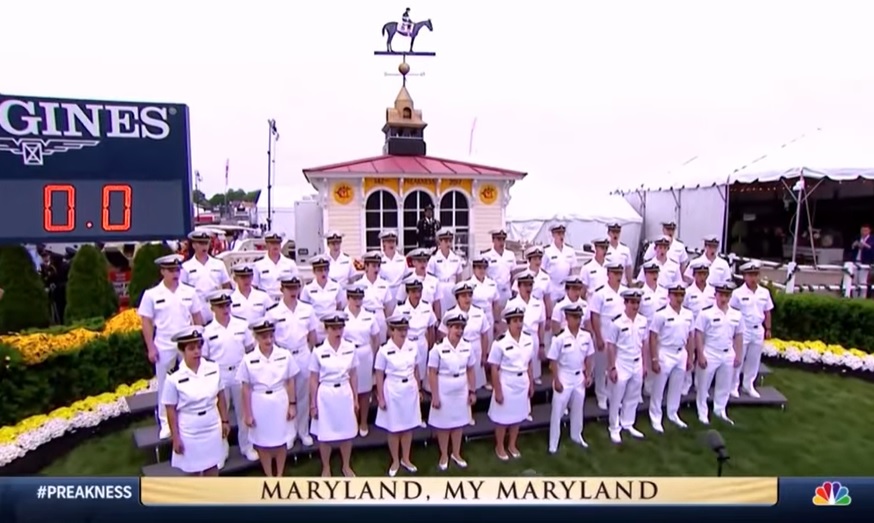 On a NBC telecast of the 2017 Preakness Stakes, the U.S. Naval Academy Glee Club sings Maryland, My Maryland, the state song.

UPDATE: Maryland’s state song sympathizing with the Confederacy may finally be heading to the dustbin of history. The House of Delegates voted to repeal the song Friday with no debate in a vote of 98-38, with a majority of Republicans voting against repeal.

Previous attempts to repeal or change the song have never made out of the House committee. But on Monday, March 8, the House Health and Government Operations Committee voted 17-7 to pass HB667 by sponsored by Speaker Pro-Tem Sheree Sample Hughes, D-Dorchester.

All committee Republicans voted against the repeal despite that fact that the lyrics many find offensive refer to Abraham Lincoln, the first Republican president, as a “despot” and a “tyrant” and even mention “Sic semper tyrannis,” meaning “Thus always to tyrants,” the Virginia state motto shouted by John Wilkes Booth after he shot Lincoln.

“I find these [words] offensive,” admitted House Republican Whip Kathy Szeliga, R-Baltimore-Harford counties. But “we have a lot of cancel culture going on” and “I’d relegate this song to history.”

Del. Karen Lewis Young, D-Frederick, pointed out the Confederate history of the song and noted it was made the state song in 1939, one of the more racist periods in Maryland history.

A 2018 policy note by the Department of Legislative Services on a similar bill to repeal the song said:

“Maryland! My Maryland! was composed by James Ryder Randall in 1861 to protest Union troops marching through Baltimore. Randall, who was born in Baltimore, wrote the poem while working as an English and Classics professor at Poydras College in Louisiana … The poem, which calls for Maryland to ‘spurn the Northern Scum’ was adopted by Southern troops as a battle hymn during the Civil War.”

Del. Sandy Rosenberg, D-Balt. City, said, getting rid of the song is “not cancel culture.”

Until the last couple years, a less offensive verse was sung on national TV at the running of the Preakness Stakes by the U.S. Naval Academy Glee Club.

Brinkley back as Senate GOP leader; Getty is minority whip