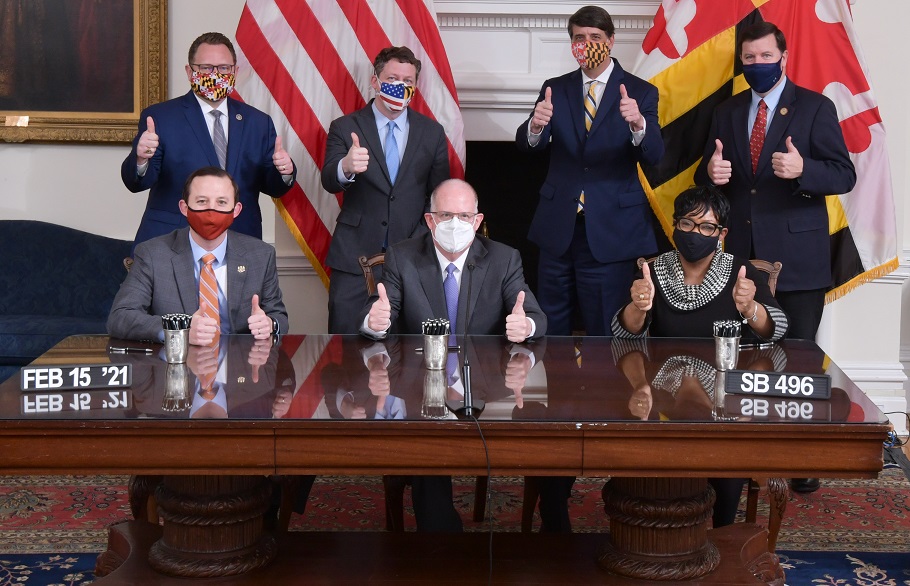 HOGAN SIGNS $1.2B RELIEF ACT: When Gov. Larry Hogan put pen to paper on Monday afternoon and signed the RELIEF Act into law, he triggered a series of maneuvers that will enable hundreds of thousands of state residents to get stimulus payments and many businesses to get tax breaks, Pamela Wood of the Sun reports.

CDC RECOMMENDS VAXX FOR REPORTERS IN PHASE 1C: The Centers for Disease Control recommends that reporters be eligible to receive the COVID-19 vaccine in Phase 1C of distribution but Maryland has not yet begun to prioritize members of that profession for vaccination, writes Bryan Renbaum for Maryland Reporter. “While our highest priority right now is vaccinating seniors and the severely immunocompromised, we have heard from a number of the members of the media interested in getting vaccinated,” Gov. Larry Hogan’s communications director, Michael Ricci, in an email on Monday.

FEWEST SINGLE-DAY COVID CASES REPORTED SINCE OCT. 2020: Maryland health officials reported 722 new cases of the coronavirus Monday, the fewest for a single day since Oct. 26, along with 26 more deaths associated with the virus. The state has reported fewer than 1,200 new cases for eight straight days and has been below that mark for 11 of the past 15 days, Nathan Ruiz of the Sun reports.

ARUNDEL PRIVATE SCHOOL TEACHERS OUT OF VAXX LOOP: In Anne Arundel County, the health department hadn’t begun vaccinating teachers in earnest until Thursday, when public school teachers lined up on a cold day to get vaccinated at Severna Park High School. But unlike some other jurisdictions, Anne Arundel County has not set up a dedicated registration or clinic for school teachers outside the public school system, making vaccine access a frustrating process, Danielle Ohl of the Capital Gazette reports.

EASING WAY TO SUE ABUSIVE POLICE OFFICERS: Lawmakers seeking to tighten police accountability in Maryland have also set their sights on civil lawsuits, with legislation that would make it easier to sue officers — and localities — for police misconduct, Ovetta Wiggins of the Post is reporting.

BILL REGULATES SCHOOL BUS CAPACITY: A bill that regulates school bus capacity has passed through the House of Delegates, a first for newly appointed Del. Dana Jones, a Democrat from Annapolis. The bill now heads to the Senate, Olivia Sanchez of the Capital Gazette reports.

EMMITSBURG TO GET WATER INFRASTRUCTURE UPGRADES: Sen. Michael Hough has helped secure $1 million in the state’s capital budget to pay for water infrastructure improvements in Emmitsburg, Steve Bohnel of the Frederick News-Post reports. The money will be used for a water clarifier, which — if the General Assembly passes Gov. Larry Hogan’s (R) budget — would be installed west of town, near a water treatment structure near Crystal Fountain Road.

COLUMN: A DISCUSSION WITH JAMIE RASKIN: Post columnist Jennifer Rubin speaks with U.S. Rep. Jamie Raskin of Maryland, the House’s lead impeachment manager in the Senate trial of former President Donald Trump. He speaks about a wide range of issues involved in the trial, including the defense case, the videos used, Sen. Mitch McConnell’s concession after the acquittal and the high emotions.

MD WOMEN’s RIGHTS GROUP SEEKS TO STRIKE DRAFT EXCLUSION: A Maryland women’s rights group is urging the U.S. Supreme Court to strike down as unconstitutional a federal requirement that only men register for the military draft. The Women’s Law Center of Maryland Inc. has joined a high court brief that derides the men-only mandate as being based on “invidious stereotypes and archaic generalizations” that treat women as second-class citizens in violation of the Constitution’s guarantee of equal protection under the law, Steve Lash reports in the Daily Record.