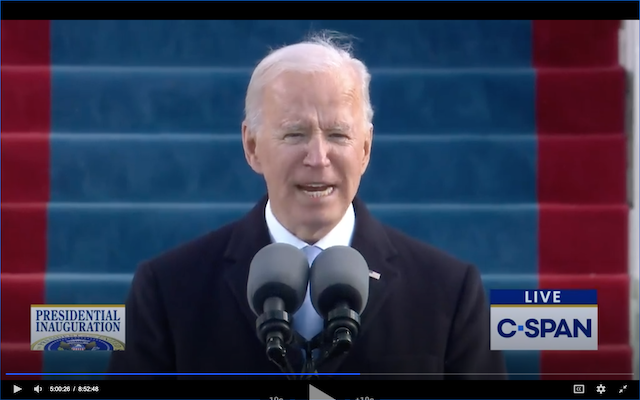 WASHINGTON – Joseph R. Biden Jr. was sworn into office Wednesday as the 46th president of the United States, calling for national unity amidst a pandemic and increased racial tension, violence and political polarization.

“I will be a president for all Americans,” Biden said in his inaugural address, repeating a sentiment he tweeted the day he was projected to win the presidency. “I will fight as hard for those who didn’t vote for me as for those who did.”

The theme of the inauguration was “America United,” a concept highlighted throughout the Biden-Harris campaign. In his address, Biden emphasized the importance of unity, saying: “Today on this January day, my whole soul is in this, bringing America together, uniting our people, uniting our nation and I ask every American to join me in this cause.”

“This is our historic moment of crisis and challenge, and unity is the path forward. And we must meet this moment as the United States of America,” Biden said. “If we do that, I guarantee you, we will not fail. We have never, ever, ever, ever failed in America when we’ve acted together.”

Just two weeks after a deadly insurrection, Biden stood on a specially-built platform on the West Front of the United States Capitol, just as every president since Ronald Reagan did before him, and called for an end to the “uncivil war.”  He pledged to lead the country into a “story of hope,” in which a “riotous mob” does not mean an end to democracy and liberty.

Chief Justice John Roberts swore Biden in as president, while Dr. Jill Biden held for her husband a Bible that has been in the family for 127 years. The five-inch-thick Bible contains important dates in the family’s history, including the dates Biden was sworn into the Senate starting in 1972 and as the nation’s 47th vice president in 2009,

Vice President Kamala Harris, the first woman, the first Black person and the first Indian American person to hold the office, was sworn in by Supreme Court Associate Justice Sonia Sotomayor, a meeting of one history-making woman with another, as Sotomayor was the first Latina to serve on the high court.

Biden began his day at the Cathedral of St. Matthew the Apostle, not far from the White House, for a pre-inaugural Mass, alongside Harris and members of both of their families.

Biden chose St. Matthew’s for the service because it is where John F. Kennedy’s funeral was held. Kennedy was the nation’s only other Catholic president.

The inauguration included a variety of performances.

Lady Gaga, wearing a billowing, patriotic red and navy dress adorned with a golden dove, sang the national anthem. She pointed emphatically to an American flag flying from the Capitol when she sang “and our flag was still there.”

Jennifer Lopez performed a high-energy rendition of “This Land is Your Land” and “America the Beautiful.” She recited a line of the pledge of allegiance in Spanish — Una nación, bajo Dios, indivisible, con libertad y justicia para todos — and sang “Let’s Get Loud,” a nod to one of her songs.

Country superstar Garth Brooks followed with a performance of “Amazing Grace.” Brooks has performed for every president since Jimmy Carter, except for Reagan and Donald Trump.

Biden also tapped 2017 National Youth Poet Laureate Amanda Gorman to recite her own work at the ceremony. The 22-year-old is the youngest poet in recent history to read at an inauguration. Her poem, “The Hill We Climb,” echoed Biden’s hopes for the nation.

In place of thousands of people normally congregating to watch the inauguration, the National Mall was filled by an art installation from the Presidential Inaugural Committee entitled “Field of Flags.”

The installation included almost 200,000 flags, including state and territorial flags, as well as 56 pillars of light. The installation symbolized all the Americans that could not travel to the Washington area due to the ongoing coronavirus pandemic and heightened security surrounding the inauguration.

Amid some light snow flurries followed by sunshine, the masked audience of about 2,000 watched the inauguration from a small group of socially distanced chairs. In past years, members of Congress have received about 200,000 tickets to distribute to their constituents. This year, they were limited to tickets for themselves and one guest. Tickets for the media also were limited.

Biden’s first day in office came just days after the country reached a grim milestone of over 400,000 COVID-19 deaths.

With the siege on the Capitol and the inauguration, Washington’s security was tightened more than at any time in recent memory.

The National Park Service closed the National Mall and several surrounding streets from January 15 to the day after the inauguration. About 25,000 National Guard members were stationed in the Washington area for the inauguration and other related ceremonies, CNN reported.

The inauguration continued unhindered by security concerns: a bomb threat was called into the Supreme Court, but the building was not evacuated. Two people were arrested near the Washington Monument by federal officers for having illegal weapons at a security checkpoint.

As he looked over members of both the Democratic and Republican Parties in attendance at the inauguration, Biden called for bipartisanship.

Several members of the Biden and Harris families attended the ceremony, along with former presidents and first ladies Bill and Hillary Clinton, George W. and Laura Bush and Barack and Michelle Obama.

Former President Jimmy Carter, the oldest living president at 96 years old, was not in attendance, marking his first missed inauguration in 44 years.  A spokesperson for the Carter Center said that Mr. Carter and his wife “have sent their best wishes to President-elect Biden and Vice President-elect (Kamala) Harris and look forward to a successful administration.”

Trump was notably missing from the day’s events. He delivered final remarks as president at Joint Base Andrews in Maryland, telling a modest crowd of his family and supporters that they “will be back in some form,” and then departing from the Washington area as president one final time On Air Force One to Palm Beach, Florida.

Trump had ignored the traditions of presidential transitions, not only refusing to concede the election to Biden but also never meeting with him. Trump left town rather than endure the usual custom of an outgoing president meeting his successor at the White House for morning refreshments, accompanying the new president to the Capitol and attending the oath-taking.

Biden was not mentioned in Trump’s final remarks and Trump was not mentioned in Biden’s inaugural address. While nearly all traditions of the peaceful transfer of power went unobserved this year, departing White House spokesman Judd Deere confirmed that Trump left a note for Biden, as did Pence for Harris.

Some Maryland leaders were in attendance at the inauguration.

Gov. Larry Hogan, a Republican, released a statement saying he was honored to attend the inauguration on behalf of the Maryland people.

Hogan congratulated Biden and pledged “the same spirit of partnership, honesty, and goodwill” that Hogan offered to former presidents Trump and Obama.

Maryland Sen. Chris Van Hollen, a Democrat, echoed Biden’s sentiments on unity in a statement released after the inauguration: “Together, we must work to heal our country, stride boldly into the future, and pursue a more perfect, just, and equal union.”

House Majority Leader Steny H. Hoyer of Maryland also released a statement: “No one is so naive to think that our deep divisions will now yield to full cooperation and consensus, but I am hopeful that the tone our new President has set will make the next four years a time of healing and reunification after such a period of conflict, crisis, and confrontation.”

Before participating in a short parade to the White House along empty streets, Biden and Harris were joined by the former first couples – the Clintons, Bushes and Obamas – at a wreath-laying ceremony at Arlington National Cemetery, just across the Potomac River in northern Virginia.

Analysis: Mikulski has a primary, miffed challenger reminds us