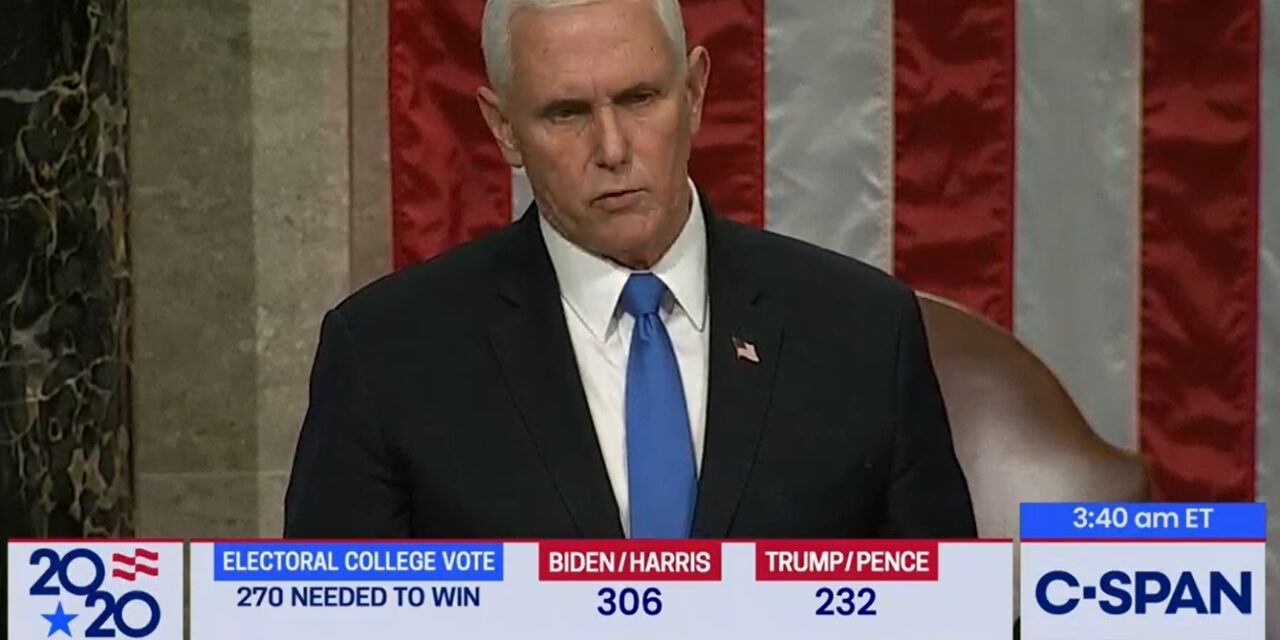 It' was 3:40 a.m. Thursday morning when Vice President Mike Pence read the final tallies of the Electoral College and declared Joe Biden and Kamala Harris as the winners of the presidential election. C-Span screen shot

MARYLAND’s CONGRESSMEN DESCRIBE SURREAL EVENTS: In a day they described as alarming and surreal, members of Maryland’s congressional delegation were locked down in their offices or other secure locations as a mob supporting President Donald Trump breached security barricades, stormed into the U.S. Capitol and tried to enter the House chamber, Jeff Barker of the Sun reports.

REP. HARRIS IN ALTERCATION ON HOUSE FLOOR: Republican Rep. Andy Harris of Maryland and Democrat Rep. Colin Allred of Texas yelled at each other to “sit down” “no, you sit down!” from across the floor during a speech by Democrat Rep. Conor Lamb in which Lamb said “it was inspired by lies, the same lies that you’re hearing in this room tonight.” They both then confronted each other in the aisle. At least a dozen other members  got up from their sides. Rep. Al Lawson of Florida, Jamie Raskin of Maryland, and a senior Democratic staffer helped break up the confrontation, report CNN’s Kristin Wilson and Daniella Diaz.

CARDIN IN LINE TO CHAIR BIZ PANEL: The looming change in Senate management means that Maryland Sen. Ben Cardin (D) is poised to become a committee chairman: He’s the senior Democrat on the Small Business and Entrepreneurship Committee, Ariana Figueroa of Maryland Matters writes. Cardin is also in line to become chairman of the Environment and Public Works Subcommittee on Transportation and Infrastructure.

MARYLAND STATEHOUSE PLAN TO MANAGE COVID: As lawmakers in Maryland and around the U.S. convene this winter to deal with the crisis created by the pandemic, statehouses themselves could prove to be hothouses for infection. The risk is more than mere speculation: More than 250 state lawmakers across the country have contracted COVID-19, and at least seven have died. Maryland Senate President Bill Ferguson said Wednesday that he and other leaders in the General Assembly developed a plan to hold the 2021 session that took into account an expected surge in January, the AP’s Amy Beth Hanson reports.

MAYOR SCOTT GOES VIRAL WITH ‘PULL YA MASK UP:’ By now, it’s the subject of a TMZ story, a city health department advertisement and even a musical remix. “Shorty, pull ya mask up,” Baltimore Mayor Brandon Scott said at a news conference Tuesday about COVID-19 regulations, during an exchange that has since caught the attention of thousands on Twitter and beyond, Christine Condon of the Sun reports.

PANDEMIC SCHOOLS: BUS DRIVERS, MAINTENANCE STAFF: Kristen Griffith of the Carroll County Times does a two-part series on the school workers who aren’t the immediate focus of attention during the Covid-19 pandemic but who are vital to making schools and children safe: Bus drivers and cleaning and maintenance staff.