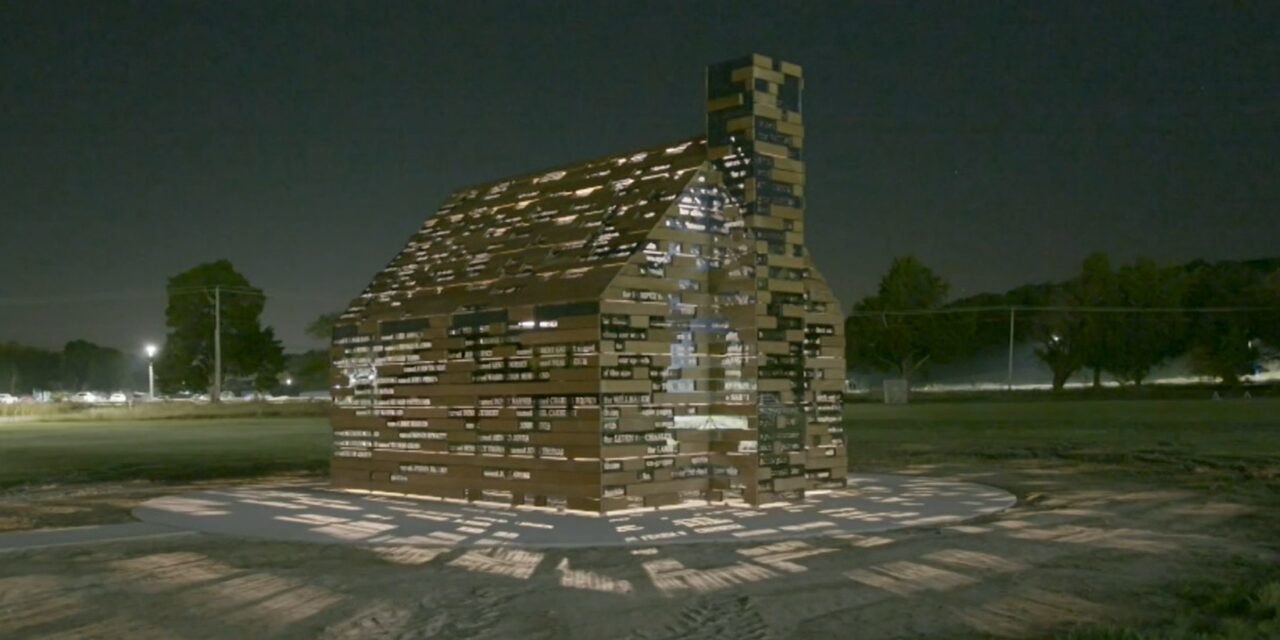 Screen shot from the PBS Newshour's six-minute video on the memorial to enslaved people who once lived at what is now St. Mary's College of Maryland. https://www.pbs.org/newshour/show/a-maryland-college-honors-the-lives-of-enslaved-people?fbclid=IwAR1i04qnCKMXM98bU6QBVMXkrzgqHdkZjk1ETRgTeRzGorM_HyY3C3mIg6o

HOGAN: STATE POLICE TO RAMP UP COMPLIANCE CHECKS: Bryan Renbaum of MarylandReporter.com writes that Gov. Hogan on Monday said that Maryland’s law enforcement agencies will ramp-up COVID-related compliance checks ahead of the Thanksgiving holiday to make sure that state and local restrictions aimed at reducing the spread of the virus are followed.

COVID SURGE CONTINUES TO BREAK RECORDS: Amid a nationwide surge, the eighth full month of the pandemic has already broken several records in Maryland, including the most COVID-19 cases in a month. The most dramatic spikes have been in Western Maryland counties that previously had among the state’s lowest infection rates, Sanya Kamidi of the Sun reports.

MORE COVID AID WENT TO WHITE COMMUNITIES: Amina Lampkin of the Capital News Service reports that predominantly white communities in Maryland received approximately 20% more loans and money per loan under the Paycheck Protection Program compared to predominantly Black communities, according to data from the Small Business Administration that the CNS analyzed.

LAWMAKERS READY TO CLOSE GAP ON DIGITAL DIVIDE: Since 2018, state officials have been addressing rural access issues where broadband infrastructure does not yet exist. But lawmakers who say progress has been too slow are already earmarking legislation that would address statewide broadband access, Brenda Wintrode of the Capital News Service reports..

OPINION: THE GOP SPLIT: Post columnist Jennifer Rubin says the Republican Party is divided. “In one half of the former GOP stand President Trump, his pathetic enablers in his campaign and in right-wing media, and the vast majority of Senate and House Republicans … the other half of the party, we see individuals from varying ideological backgrounds but who share a fundamental belief in democracy and the rule of law.” Gov. Larry Hogan is numbered among the second half.

REPUBLICAN DELEGATES MOCK HOGAN: In this podcast on YouTube, Republican Dels. Mark Fisher of Calvert and Brian Chisholm of Anne Arundel, have a good time mocking Republican Gov. Larry Hogan as a “RINO selling out.”

WHO IS AVRIL HAINES? As President-elect Joe Biden has begun to fill out his administration, he announced Monday that Avril Haines would be nominated to be director of national intelligence. If confirmed, Haines would be the first woman to serve in the role. Haines has ties to Maryland and to Fells Point in particular, where she and her husband owned a bookstore, Ben Leonard reports for the Sun.

NATIONAL GROUP PUSHES SANTELISES AS BIDEN ED PICK: A national education group is pushing Baltimore schools CEO Sonja Santelises as one of its top choices to lead President-elect Joe Biden’s Department of Education, Liz Bowie reports for the Sun. Democrats for Education Reform has proposed people who have experience and success in running an urban school system, as well as those who support testing and charter schools.

POLITICAL NOTES: FROM D.C. TO ANNAPOLIS: Briana Adhikusuma and Dan Schere of Bethesda Beat do a roundup of political notes, including on the Mongtomery residents Biden has picked for his administration: Ronald Klain as his chief of staff, and Jen O’Malley Dillon, as deputy chief of staff. Both are from Chevy Chase.

BIDEN SCORED BIG IN HOWARD COUNTY: President-elect Joe Biden received a higher share of the vote in Howard County than any presidential candidate in recorded history. Biden, a Democrat, received 70.7% to incumbent President Donald Trump’s 26.4% among the 183,062 Howard County residents who voted in the presidential race, Jacob Calvin Meyer reports for Sun Media.

REPUBLICANS DEAL WITH THE DENIERS: Robert McCartney of the Post asks Republicans how they would deal with those in the electorate who continue to deny that Joe Biden won the presidential election fairly. Doug Mayer, a Republican strategist and former communications director for Larry Hogan, was appalled by some of the ­far-fetched notions floated by Trump and his team. “Conspiracy theories from the tinfoil-hat brigade absolutely need to be refuted, every one, all the time,” Mayer said.

PITTMAN ALTERS DEVELOPMENT PROCESS: In an effort to boost community engagement, Anne Arundel County Executive Steuart Pittman is implementing changes to the development process, Olivia Sanchez reports for the Capital Gazette. The changes include limiting meetings in the same councilmanic district to two per day, staggering start times when two meetings do occur and prohibiting development meetings from being held on county holidays.

YOUNG TO TRY TO KEEP HOMELESS IN HOTELS: Faced with a Dec. 31 cutoff of federal dollars that currently pay for hotel rooms, Baltimore city’s Young administration is looking for other funding sources to keep the homeless from returning to congregate shelters or to the streets. “We are in the process of extending the contracts with the hotels,” James Bentley II, spokesman for Mayor Jack Young, said Monday night. Mark Reutter writes the story for Baltimore Brew.

ST. MARY’S COLLEGE PAYS TRIBUTE TO SLAVES IN ITS PAST: Joe Heim of the Post writes about St. Mary’s College paying tribute to the slaves that the college once owned – and forgot about. “Four years ago, as it set out on a construction project to help shape its ambitious 21st century future, St. Mary’s College of Maryland discovered disquieting evidence of its 19th century past,” he writes. The unveiling of the commemoration was attended virtually by Gov. Hogan and House Speaker Adrienne Jones. “My ancestors were enslaved and now I’m president of a primarily White institution and that’s significant,” said St. Mary’s President Tuajuanda C. Jordan.