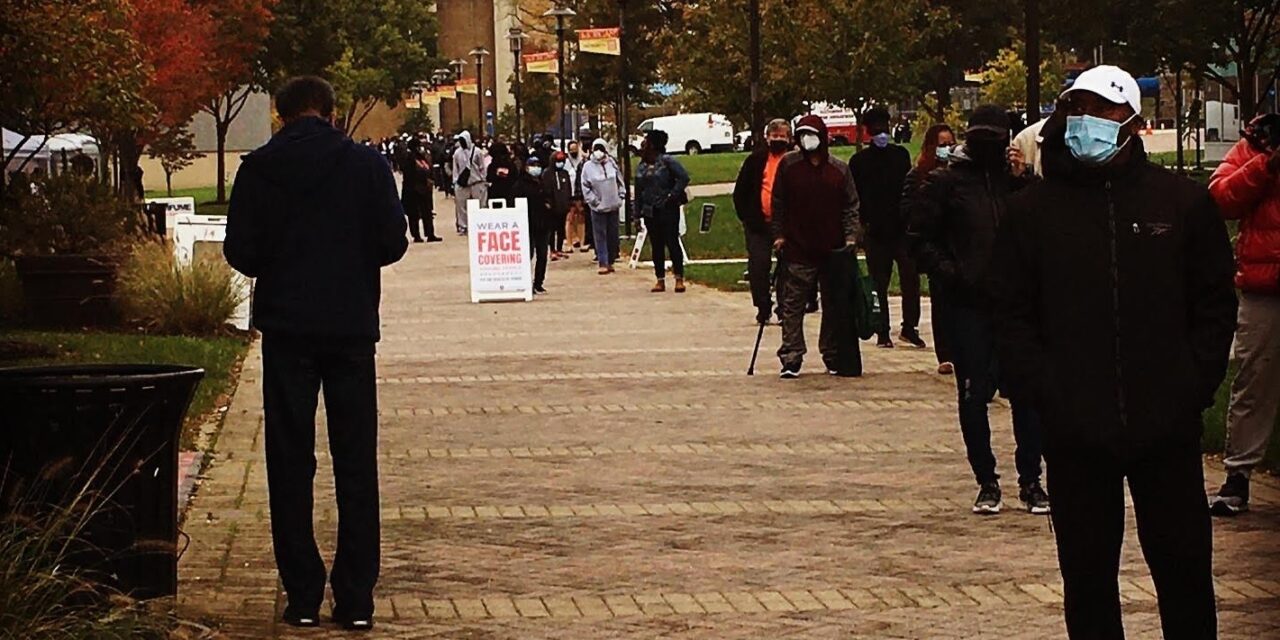 There were long lines for early voting across Maryland Monday, like this one at Morgan State University in Baltimore, heading to vote at Hurt Gymnasium. Photo by Stacey Smith

BLACK VOTERS TURN OUT IN DROVES TO VOTE EARLY: They brought folding chairs, determination and family stories of voter suppression. One came with a sprained ankle, another skipped a morning’s work. Several had lost family members to the coronavirus pandemic but still risked their own health to inject confidence into an electoral system they distrusted. Black voters, in particular, said the legacy of voter suppression in this country encouraged them to do whatever it took to ensure their vote was counted, Ovetta Wiggins, Rebecca Tan, Rachel Chason and Erin Cox report for the Sun.

1.1 MILLION MARYLANDERS HAVE VOTED: With Monday’s 161,000-plus votes combined with the 947,941 mail-in ballots returned so far, more than 1.1 million Marylanders have voted so far in 2020, Bennett Lekrone of Maryland Matters reports. 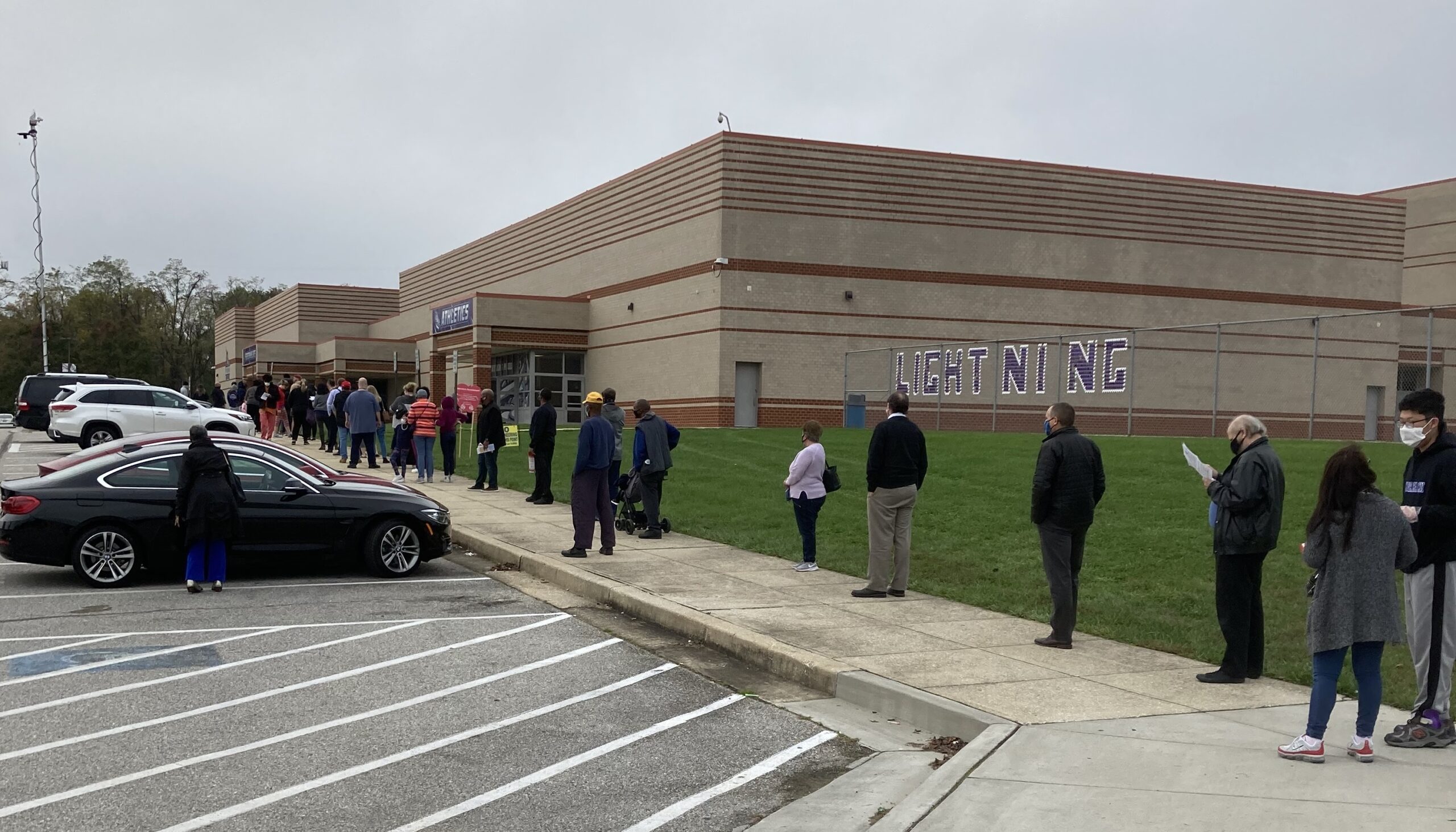 Early voting line at Long Reach High School in Columbia Monday afternoon. Voting took about half an hour. Inside everyone got a plastic bag with I Voted sticker and a pen. MarylandReporter.com photo by Maureen Kelley

GOT AN EARLY VOTING PHOTO? Send it along to Len@MarylandReporter.com. Include the time, place and who took the photo.

FALLSTON MAN ARRESTED AT POLL: A 52-year-old Fallston man was arrested at a Jarrettsville voting center Monday after refusing to follow election requirements, McKenna Oxenden reports in the Sun.

BLACK CEMETERY A BATTLEGROUND: The inconspicuous construction site hidden behind a McDonald’s parking lot just off River Road has become the latest battleground in the fight over commemorating a historic Black cemetery in Bethesda, Emily Davies of the Post is reporting.

FRANCHOT URGES MORE SUPPORT OF LOCAL BIZ: Comptroller Peter Franchot is pushing for customers to support small businesses during the holiday season. Franchot teamed up with Maryland’s business and credit union leaders on Monday to urge the state’s residents to support local businesses and restaurants during the upcoming holiday season, Bryan Renbaum of Maryland Reporter reports.

CARDIN, VAN HOLLEN CRITICIZE BARRETT VOTE: Democratic Maryland Sens. Ben Cardin and Chris Van Hollen criticized the late-Monday Supreme Court confirmation of Amy Coney Barrett, who was approved for the bench by a divided Senate less than a week before the presidential election, McKenna Oxenden of the Sun reports.

FEMA COVID FUNDING LAGS IN MD, VA: FEMA has reimbursed the District of Columbia about $90 million — or about $130 for each resident — for fighting the novel coronavirus. Neighboring Montgomery County has gotten $20,000, or about 2 cents per resident. The rest of Maryland and, to an even greater extent, Virginia, are also lagging far behind the nation’s capital, where officials are sensitive to being shortchanged by the federal government and have aggressively pursued reimbursement, Rebecca Tan writes for the Post.

OPINION: ENERGY INNOVATION IS ECONOMIC DEVELOPMENT: I. Katherine Magruder of Maryland Clean Energy Center in a column for Maryland Reporter opines that now is the time to generate economic opportunities for the many powerhouse academic research institutions and federal labs in Maryland – from the University System of Maryland and Johns Hopkins University to the National Institutes of Health and USDA Beltsville Agricultural Research Center – as we fight to combat climate change and make the necessary investments to reap the inevitable return.

POLL: MOST MARYLANDERS DON’T WANT KIDS IN CLASSROOMS: Only one in five Marylanders feel children in Maryland should return to the classroom full time during the pandemic, according to a new poll released by Annapolis-based Gonzales Polls. Bryan Sears of the Daily Record writes that the poll, released Tuesday morning, finds a substantial majority of those surveyed are equally split between continuing with remote learning or moving to a hybrid model with some in-class instruction during the COVID-19 pandemic.

POLL: EDUCATORS LEERY OF REOPENING SCHOOLS: Elizabeth Shwe of Maryland Matters writes that a recent Maryland State Education Association poll finds that more than three-quarters of Maryland educators do not think that schools will be able to reopen safely for full in-person learning for the next few months.

POLL: PERCENT OF TRUMP VOTERS = THOSE NOT WORRIED ABOUT COVID: The percentage of Maryland voters supporting President Trump’s reelection tracks roughly with the percentage of voters who aren’t worried about contracting the coronavirus, according to a newly-released poll, Josh Kurtz reports in Maryland Matters.

FEDERAL JUDGE REFUSES TO BLOCK PRO-ISRAEL BAN: A federal judge on Monday threw out a lawsuit in which a Muslim civil rights group sought to block the state of Maryland from enforcing its ban on contracting with businesses that boycott Israel, Michael Kunzelman of the AP is reporting.

HIGH SCHOOL SPORTS TO START DEC. 7: Winter high school sports for public school students across the state can begin Dec. 7, a move that will allow three separate seasons of about the same length before the end of the school year, Liz Bowie and Tim Schwartz of the Sun report.

QUEEN ANNE’S SCHOOLS SUPER ON LEAVE: The schools superintendent in Queen Anne’s County stopped going to work over two weeks ago after a contentious school board meeting — leaving many in the county wondering what has happened and who’s in charge of its 15 schools as they prepare to reopen after months of closure due to the coronavirus. Kane’s leave is the fourth major personnel change in recent months, Jonathan Pitts and Liz Bowie report in the Sun.

PETITION TO REMOVE CITY STATUE: An online petition signed by hundreds is calling on Baltimore officials to remove a 40-year-old statue dedicated to Capt. John O’Donnell, an Irish-born merchant who enslaved people on his plantation in Canton, Yvonne Wenger of the Sun reports. The petition is the latest effort in a widespread reckoning involving monuments that honor people with ties to America’s racist past.