NEW FRACKING PROPOSALS: The Hogan administration is proposing rules that would limit the hurdles that energy companies must overcome before they could start the gas-drilling process known as fracking, while also requiring more protections against groundwater contamination, Scott Dance of the Sun is reporting. In revising a plan crafted by the administration of then-Gov. Martin O’Malley, state environmental regulators on Wednesday endorsed speeding the review of natural gas wells, allowing them closer to homes and waterways and reducing the amount of environmental testing required before drilling could begin.

GERRYMANDER FALLOUT: A hearing in Baltimore next month could help decide if the state’s 2012 congressional map unconstitutionally stifled the voices of Frederick County’s Republican voters, Danielle Gaines of the Frederick News Post reports. This week, Maryland election officials again asked a federal court to dismiss the case, one of multiple challenges to how congressional boundaries were drawn.

EVANS REMAINS TOP GROSSING LOBBYIST: Gerry Evans was again the top grossing lobbyist during this year’s General Assembly session, billing close to $2 million. He got a significant boost from his top client, the second highest spending lobbyist employer, the Law Offices of Peter Angelos, which spent $380,000 to lobby the legislature, writes Len Lazarick for MarylandReporter.com. “It was a great year,” Evans said, but “I question the importance of the figure …. It’s still better than being last.”

BENTLEY IN HOSPICE: Former U.S. Rep. Helen Delich Bentley, for whom the Port of Baltimore is named, is in failing health and has been moved to full-time hospice care at her home in Timonium. Bentley, 92, was discharged from Greater Baltimore Medical Center after spending the weekend there. It was the most recent of several stays at GBMC over the past year, during which she was treated for multiple ailments and injuries, Michael Dresser of the Sun writes.

STATE PUTS DOLLAR FIGURE ON FBI HQ: A letter released by the Hogan administration Wednesday summed up how much the state was willing to spend in order to attract the new headquarters to one of two proposed spots in Prince George’s County. Hogan wrote to the developers of each location that “the state offers a robust funding package” that will take care of all transportation improvement and environmental impact projects required for the federal government, writes Erin Cox in the Sun.

HOGAN’S MOVE ON TRUMP: Gov. Larry Hogan’s announcement last week to not vote for presumptive Republican presidential nominee Donald Trump raised eyebrows from members of his party and questions about how it might affect his re-election chances, writes Bryan Sears for the Daily Record. Did Hogan, in rejecting Trump, avoid a trap some Democrats were anxious for him to step into by aligning himself with the bombastic presidential candidate or did he stumble into another that will cost him support from his Republican base? 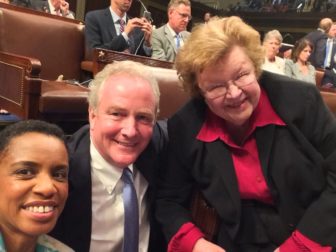 Sen. Barbara Mikulski, right, visits House floor where Reps. Donna Edwards and Chris Van Hollen, foes in the primary to replace her, are participating in the sit-in. From Mikulski’s Facebook page.

MARYLANDERS JOIN HOUSE DEM PROTEST: House Democrats, frustrated over the lack of progress on gun control, staged a sit-in on the chamber’s floor Wednesday, and vowed not to leave until Republican leaders allowed a vote on a proposal to ban people on terrorism watch lists from buying firearms. The unusual standoff, which began in the morning, continued into the night and included chants of “No bill, no break!” brought senior leaders and members of the Senate — including the Democratic members of Maryland’s congressional delegation — to the floor throughout the day, according to a report in the Sun.

O’MALLEY STUMPS FOR CLINTON: Former Gov. Martin O’Malley is returning to Iowa this week to campaign for presumptive Democratic presidential nominee Hillary Clinton, marking the first time he has served as a surrogate on her behalf since he dropped out of the race in February, writes John Fritze in the Sun.

BLAINE YOUNG TRIAL POSTPONED: The trial of a former Frederick County Board of County Commissioners president accused of prostitution has been postponed, according to court records.  Kelsi Loos of the Frederick News Post writes that Blaine Young was charged with four counts of prostitution in Anne Arundel County after a Feb. 18 sting at a hotel near Baltimore/Washington International Thurgood Marshall Airport.

MO CO’s TAX HIKE: The need to fund Montgomery County Public Schools was one reason given by Montgomery County officials for their recent hike in property taxes.  Another reason was the effects of the U.S. Supreme Court’s decision in the Comptroller of The Treasury of Maryland vs Wynne case, Adam Pagnucco of Seventh State writes.