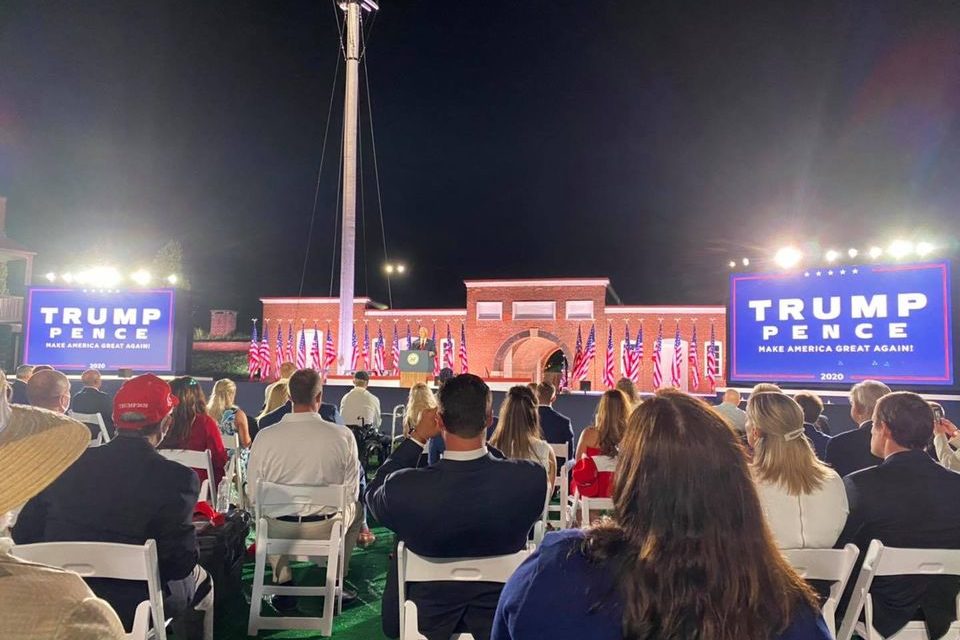 PENCE SPEAKS FROM FORT McHENRY: On another night of unrest following a Wisconsin police shooting, Vice President Mike Pence pledged at Fort McHenry on Wednesday night that the Trump administration would stand with police and warned: “You won’t be safe in Joe Biden’s America.” Jeff Barker of the Sun reports that in a surprise, President Donald Trump arrived at the Baltimore fort to attend Pence’s renomination address at the Republican National Convention.

RASKIN SAYS GOP USE OF FEDERAL PROPERTY ILLEGAL: Rep. Jamie Raskin (D-Md.), a constitutional law professor at American University, called the GOP’s use of the executive mansion and other federal property during the course of the convention “a blatant violation of the law,” report Bruce DePuyt and Hannah Gaskill for Maryland Matters.

HO CO USES COVID FUNDS TO SUBSIDIZE CHILDCARE: Howard County Executive Calvin Ball said Wednesday that coronavirus relief funds from the federal government have been allocated to subsidize the costs of a new childcare program operated by the county’s Department of Recreation & Parks. The funding will allow about a 30% cost reduction to families, Bryan Renbaum of MarylandReporter writes.

DAILY COVID CASES RISE ABOVE 400: Maryland lost some ground to the novel coronavirus Wednesday with increases in new cases (440), confirmed deaths (10), current hospitalizations (21) and the positivity rate (.1%). The increases arrived after many of those key indicators had fallen to either record lows or their lowest levels in months, Greg Swatek reports in the Frederick News-Post.

NURSING HOMES OUTLINE COVID TESTING BURDEN: Operators of the state’s 227 nursing homes and 137 assisted living facilities say the costs of carrying out state mandates for weekly COVID-19 testing of employees could cause sharp increases in costs and even bankrupt some facilities, Bryan Sears of the Daily Record is reporting.

TOWSON U. TO HOLD CLASSES ON-LINE: Towson University will hold classes online for the rest of the fall semester and close its campus to most in-person classes as well as its residence halls, after a significant number of students tested positive for COVID-19 just before students returned to classes Monday, Taylor DeVille of the Towson Times reports.

UM TO PROBE ITS STRUCTURAL RACISM: After a summer of national reckoning on racial injustice, the University System of Maryland is taking proactive steps to examine structural racism that may be inherent in its own system and across its 12 affiliate institutions, Elizabeth Shwe of Maryland Matters reports. The first part of this process within USM involves introspection, officials said Wednesday.

OPINION: STOP WITH THE HUGE PAYOUTS: The editorial board of the Sun has a simple message for the state during the Covid-19 crisis that has hurt so many Americans physically and financially: “As public service to the people of Maryland, to the state’s elected officials and most especially to those individuals who have any say in how billions of tax dollars are spent these days, we offer this sensible advice: NO HUGE PAYOFFS, regardless of whether you think the governor approves or not.”

STATE PANEL ON POLICING CONSIDERS MEASURES: A bill of rights for police officers is among the measures under consideration as a Maryland group created to instill trust between the community and law enforcement discussed police reform recommendations making interrogations digital, training and more citizen input. The ideas received Monday, Aug. 24 will continue to be refined by the Commission to Restore Trust in Policing, which was set up by the state legislature, reports William Ford for the Washington Informer.

MORE PROTESTS SUPPORTING POSTAL SERVICE: Cars honked and passers by cheered as about 30 people gathered, chanted and held signs in front of Baltimore’s central U.S. Postal Service facility on Tuesday in a show of support for the beleaguered agency, Sameer Rao of the Sun reports.

FREDERICK ED BOARD MEMBER SEEKS LATER SCHOOL START: Just days before the first day of instruction for Frederick County Public Schools, a board member suggested delaying the start date by a week, Katryna Perera of the Frederick News-Post reports. Frederick County Board of Education member Liz Barrett announced in a tweet Wednesday morning that she had asked her fellow board members to consider delaying the first day of school, which is this coming Monday, Aug. 31.

MO CO TEACHER WHO RAN FOR CONGRESS ARRESTED: Maxwell Bero, a Watkins Mill High School teacher who ran against David Trone for Congress this year, was arrested on Wednesday, accused of sexually abusing a 14-year-old student in 2014 and 2015, Caitlynn Peetz of Bethesda Beat reports.