Van Hollen: Ending TPS would hurt both Maryland’s and the nation’s economy

U.S. Sen. Chris Van Hollen (D-Md.) said ending a program that allows people from countries that are either war-torn or disaster-stricken to temporarily stay and work in the U.S. would hurt both Maryland’s and the nation’s economy because the program’s recipients include many essential workers-some of whom are on the frontlines in the fight against the coronavirus.

The Temporary Protected Status (TPS) program was authorized by a provision in the Immigration Act of 1990. The program provides protection to individuals from ten countries. They are: Syria, El Salvador, Haiti, Honduras, Nicaragua, Nepal, Yemen, Somalia, Sudan and South Sudan. In 2018, President Donald Trump ordered an end to the program but immigration advocates went to court to challenge his decision. The U.S. Court of Appeals for the Ninth Circuit is soon expected to issue a decision on the program’s fate.

“Ending their TPS status would not only be morally wrong, but it would be totally counterproductive and stupid as a matter of policy for the United States to deport individuals who are working hard in our community everyday-including so many who are on the frontlines and putting themselves at risk for others in the community as we fight the coronavirus,” Van Hollen said during a press call on Thursday with special emphasis on several Maryland TPS holders who spoke during the call.

Van Hollen said the estimated 400,000 TPS holders and their families living in the U.S. “contribute over $164 billion to the GDP every year” and that they include “small business owners, community and civic leaders” and “essential frontline workers.”

“If you look at the state of Maryland alone we would take a big hit to our economy if we were to lose these TPS holders from El Salvador, Haiti and Honduras and other places.”

Van Hollen said Maryland is home to more than 6,600 TPS holders who are essential workers and that they are an integral part of the state’s workforce.

“These are individuals who even before the pandemic were incredibly productive.”

Van Hollen said he will continue to push Senate Majority Leader Mitch McConnell (R-Ky.) to hold a vote on legislation that passed the Democratic-controlled House of Representatives that would protect both TPS and holders and DACA recipients from deportation.

“We need a long term solution here and that is what the legislation is all about.”

Van Hollen said Senate Democrats will insist that a provision in the House’s pandemic assistance package that includes an extension for employment authorizations for TPS holders also be included in the upper chamber’s version of the legislation.

TPS holders Ramesh Bhatta and Katherine said they are happy with their lives in the U.S. and want to stay here.

“I do not know what I would be doing without TPS at the moment,” Bhatta, a gas station owner who emigrated from Nepal in 2008, said.

Bhatta, who earned his Bachelors Degree in 2015, said, “TPS status has helped me achieve a lot in life and made me realize opportunities the opportunities that are there to grab if we are integrated into the society.”

Katherine, who has been a registered nurse for four years, echoed similar sentiments.

“It’s an amazing privilege to be a nurse, especially during these times. And being a TPS holder-it has given me a chance to have this opportunities — to have been able to study and get my nursing degree. And be able to work in an area where I can give back to communities and to a country that has given me so much already.” 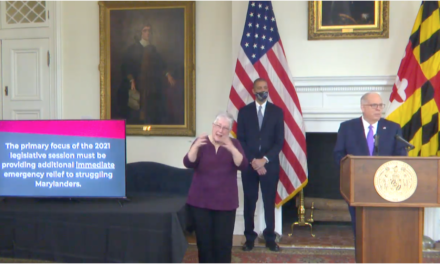