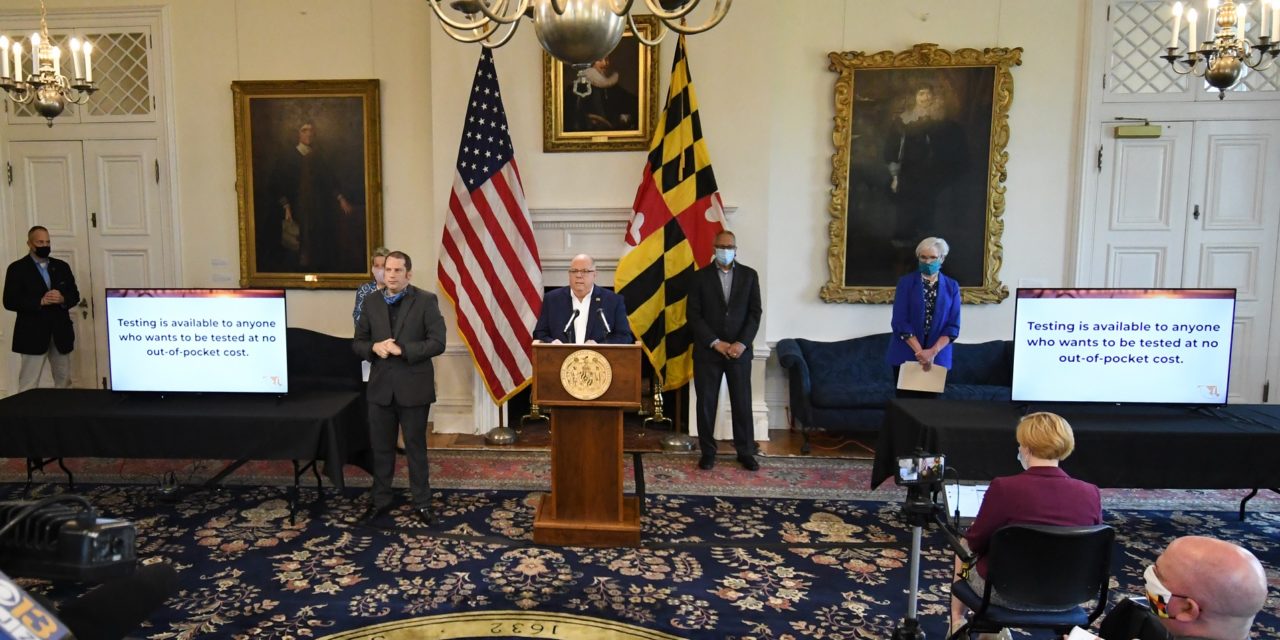 RESTAURANTS CAN REOPEN TO INDOOR DINING: Gov. Larry Hogan said Wednesday that the state’s fight against the coronavirus has progressed to a point at which restaurants will be able to resume indoor dining at 50% capacity on Friday evening, reports Bryan Renbaum for MarylandReporter.

HOGAN CRITICIZES MAYOR YOUNG ON REOPENING: Gov. Larry Hogan chastised Baltimore Mayor Jack Young on Wednesday for his pace in reopening the city from the coronavirus pandemic, saying it was “absolutely absurd” that small retail hasn’t been allowed to resume in-store operations, reports Lillian Reed and Pamela Wood in the Sun.

USM CONSIDERS TUITION FREEZE: The University System of Maryland is considering a tuition freeze at all 11 of its member universities for the coming academic year, Morgan Eichensehr of the Baltimore Business Journal reports.

FREDERICK SALONS REOPEN, WITH RESTRICTIONS: Erika Riley of the Frederick News Post reports that after more than two months of closure, barber shops and salons are finally snipping off their setbacks and opening their doors. However, state and county requirements include working with limited capacity, wearing masks and only offering service by-appointment.

‘DEFUNDING’ B’MORE POLICE? Justin Fenton of the Sun writes that as people around the nation are calling for the “defunding” of police departments, what does that actually mean and what would that mean for Baltimore City? At the same time, faced with high crime rates and calls for reform, police have said they need more resources: more officers, more training, more technology. The federal consent decree now all but requires it.

RACIAL JUSTICE PROTESTS CONTINUE: You don’t need to say a lot to make change. That’s the philosophy of 7-year-old Noah Thomas, who marched through Crofton alongside his mother, Zoe, and about 500 protesters of all ages on Wednesday, Selene San Felice writes for the Capital Gazette.

FACULTY PETITIONS TO HALT HOPKINS POLICE FORCE: Ellie Heffernan of the Daily Record reports that faculty at Johns Hopkins University are circulating a petition calling on President Ronald J. Daniels to halt the creation of an armed private police force on campus. Legislation enacted last year, which allows Hopkins to create the police force, came only after a years-long  and contentious community debate between those who said it would lower crime and others who said it would exacerbate tensions on campus.

NURSING HOMES COVID CASES, DEATHS UNDERREPORTED: Maryland is significantly underreporting total counts of coronavirus cases and deaths at nursing homes and other elder care facilities, posting data on a public online dashboard that lawmakers, advocates and families assumed to be cumulative but was actually only showing snapshots in time. Hundreds of cases and casualties are missing from the latest totals released Wednesday, an analysis by Scott Dance and Kalani Gordon of the Baltimore Sun has found.

RACIAL DISPARITIES IN COVID-19 CASES: Dr. Sherita Hill Golden, vice president and chief diversity officer for Johns Hopkins Medicine, said the theory that Black and Latino communities have seen more adverse effects of the pandemic because of comorbidities like diabetes and heart disease is true, but it is “not the whole part of the story,” Hannah Gaskill reports for Maryland Matters.

SCOTT’s INNER CIRCLE: Josh Kurtz of Maryland Matters takes a look at some of the people who are likely to remain part of Scott’s inner circle — and others who helped him to victory. These include Alicia Wilson, a fellow Merganthaler Vocational-Technical High School grad – she was valedictorian.

OPINION: BRANDON SCOTT’s FUTURE: By the narrow length of his goatee, Brandon Scott is on his way to becoming Baltimore’s first millennial mayor. When he takes control in December, Scott will face a tsunami of intractable problems of historic proportions, opines Barry Rascovar in his PoliticalMaryland blog.

NEW I-270 INTERCHANGE OPENS: Maryland highway officials opened a new Interstate 270 interchange Wednesday that will allow motorists to enter and leave the highway directly from Watkins Mill Road in Gaithersburg, reports Katherine Shaver in the Post.

U.S. REP. BROWN CALLS FOR RENAMING FORTS: U.S. Rep. Anthony Brown, D-Maryland, is calling for forts named after Confederate leaders and soldiers to be renamed after President Donald Trump tweeted Wednesday evening that he would not rename them, Heather Mongilio of the Capital Gazette reports. Forts, such as Fort Bragg, Fort Benning and Fort Hood, have come under scrutiny as Americans continue to grapple with systemic racism. The bases are among 10 identified as named after Confederate generals.

PUGH RETURNS $860,000 IN DONATIONS: Catherine Pugh, the disgraced former mayor of Baltimore, is giving back more than $800,000 to donors to her political campaign, reports Pamela Wood for the Sun.