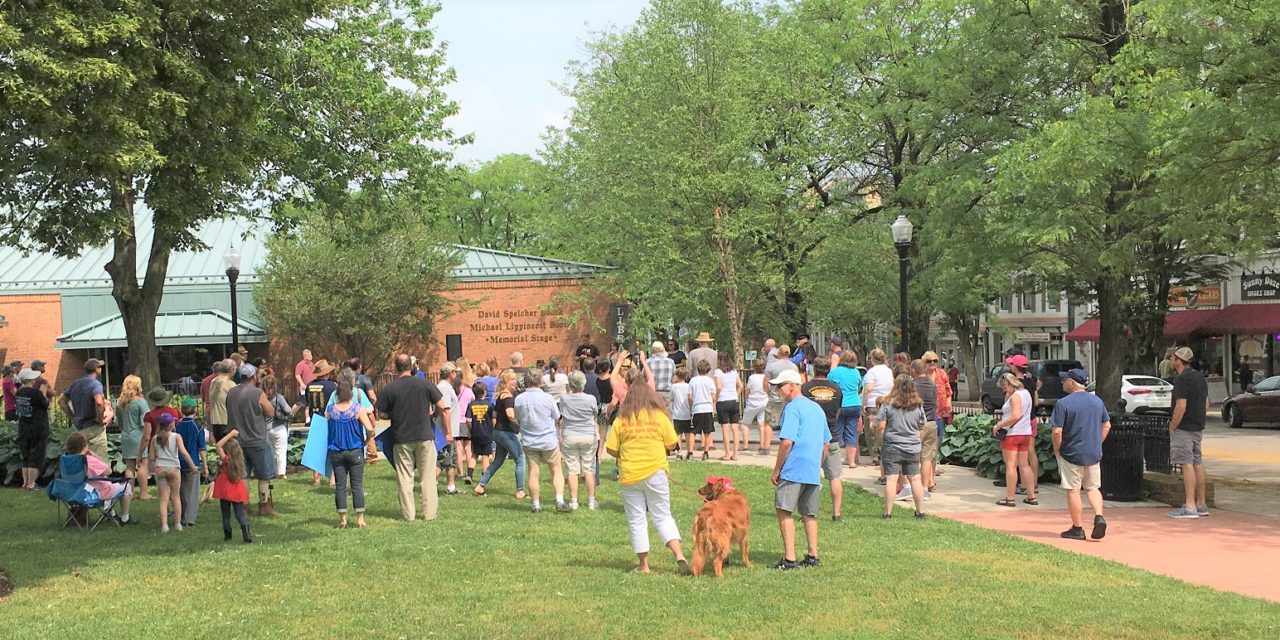 The crowd at a reopening rally at the Westminster branch of the Carroll County library Saturday morning. MarylandReporter.com phot by Len Lazarick

The leader of the Reopen Maryland protests of virus shutdowns told a small crowd in Westminster Saturday that “Black Lives Matters are arguing about the same thing as we are … allowing government to determine who is important and who is not.”

Tim Walters, who speaks at rallies across the state demanding an end to virus restrictions, was addressing a gathering of about 75 adults and a dozen or so children at the Carroll County library in Westminster. Almost all were white and few wore masks, which were clearly unpopular.

“It’s high time – it’s past time — for authoritarian government to get its jackboot off the back of our citizens and businesses,” said Del. Haven Shoemaker.

“In March, we had no idea what we were dealing with,” Shoemaker. “We now have three months of data.

“The curve was made flatter than a pancake…. The government picked winners and losers,” said the delegate. “We know that the virus kills, but so does poverty.”

Natalie Brown, who ran a travel agency, said, “Larry Hogan has destroyed my business. This man Larry Hogan is not a leader for our state but a puppet for a movement.”

Rose pointed out that hospital floors and emergency rooms were empty waiting for Covid-19 patients who didn’t show up, and health care workers were laid off.

There were passionate pleas to reopen the public schools.

“We’re still not giving our kids what they deserve” because schools are closed, said Ken Kiler, a member of the elected Carroll County Board of Education.

He said a lot of teachers agree, but they won’t show up at rallies such as this “because they’re afraid for their jobs.”

(Decisions on school closings have been made by the state superintendent.)

Carroll County Commissioner Eric Bouchat was critical of the four other Republican commissioners who weren’t attending the rally.

Bouchat said the continuing restrictions on business and gatherings were based on “a template set by Communist China.”

“I think [the governor] is covering his ass” and “protecting his initial failures.”

Speakers noted that most of the deaths from the virus in Carroll County occurred in nursing homes.

“This thing is an absurdity that needs to stop,” Bouchat said.

After the hour-long reopen rally dispersed, a smaller 20-person Black Lives Matter demonstration to address the police killing of George Floyd showed up on the sidewalk. Almost all those demonstrators were white as well. A number of passing motorists honked their horns in support.

Carroll has the second-highest percentage of whites of any Maryland county (92%)  with the exception of tiny Garrett County in the far western mountains.

A small sidewalk demonstration over the killing of George Floyd Saturday around 1 p.m.. MarylandReporter.com photo by Len Lazarick