COVID CASES AROUND THE STATE: New data about the coronavirus outbreak in the state show high concentrations of cases in some areas of the Baltimore metro region. While Prince George’s and Montgomery counties continue to lead the state in COVID-19 cases – accounting for nearly half of the state’s confirmed coronavirus diagnoses and deaths – several parts of Baltimore City and Baltimore County also have seen a high number of cases, Phil Davis of the Baltimore Sun reports.

NEW MODELS SHOW LARGE UPTICKS IN D.C. ‘BURBS, SHORE: While the outbreak appeared to be plateauing nationwide, new models for Maryland created for the Baltimore Sun by Logecal Data Analytics now project more deaths in every region of the state, with the biggest upticks in the hard-hit Washington suburbs and on the Eastern Shore, Meredith Cohn reports in the Sun.

D.C.-AREA HOSPITALS READY FOR SURGE – ON ONE CONDITION: The Washington Post’s Robert McCartney reports that hospital execs and public health experts say Washington-area hospitals are prepared to handle an expected surge of COVID-19 patients, as long as the region doesn’t act too quickly to ease restrictions that have slowed the disease’s spread.

REOPENING COULD HAPPEN SOON, HOGAN SAYS: Gov. Larry Hogan says a reopening could occur as soon as next week. If the key data points he is watching keep trending in the right direction, Hogan plans to lift the stay-at-home order then. But he’s quick to caution residents that he’ll keep everyone at home if the situation changes, Erin Cox reports for the Post.

MO CO REOPENING MAY BE SLOWER: Montgomery County Executive Marc Elrich said on Saturday that the county might not open as fast as other parts of Maryland during the coronavirus pandemic, Dan Schere of Bethesda Beat reports.

PRINCE GEORGE’S NOT READY TO REOPEN: Prince George’s County Executive Angela Alsobrooks said Prince George’s, the hardest-hit jurisdiction in the state from Covid-19, is not ready to back off many of the protections that have been put in place, Bryan Sears reports for the Daily Record.

GARDNER: NO WARNING OF REOPENING: Frederick County Executive Jan Gardner, in discussing Gov. Hogan’s decision to reopen some recreation areas, said that neither she nor any of the other leaders in a letter to Hogan had advance notice about the decision and that some municipalities – like Thurmont and Middletown – opened their playgrounds, while others – like Frederick – did not, Steve Bohnel of the Frederick News-Post reports.

FROSH DEFENDS ADMINISTRATION OVER LAWSUIT TO REOPEN: Attorney General Brian Frosh’s office urged a judge in U.S. District Court in Baltimore on Friday to toss out a lawsuit filed last week challenging stay-at-home orders and other restrictions Gov. Larry Hogan has imposed. Frosh’s office says that federal courts have generally turned aside similar challenges in other states and that governors enjoy broad authority to act swiftly during a public-health emergency, WBAL-AM reports.

FRAUD CHALLENGES BIZ RELIEF WORK: State Commerce Secretary Kelly Schulz said that as her department has been trying to distribute relief money to businesses throughout the state, it has come across an unexpected challenge during its review process — “fraudulent” applications and duplicate applications. Some businesses sent copies of their “supposed approval” and said they were waiting for checks, but officials later found out the images were Photoshopped from screenshots.

WHAT BECAME LAW? Measures to expand protection for alleged victims of sexual assault, ease the standard for proving a hate crime and broaden the Maryland civil rights law’s definition of “race” to include ethnic hairstyles will go into effect Oct. 1, Steve Lash of the Daily Record reports.

OPINION: DON’T BLAME ALL CUTS ON PANDEMIC: The editorial board for the Sun opines that “Gov. Larry Hogan’s veto of dozens of bills — ranging from a generational overhaul of K-12 public education to a much more modest $3-million-per-year effort to prevent crime in Baltimore, starting in 2022 — can’t be justified by the pandemic alone.”

COMMENTARY: DID WE WASTE MONEY ON TESTS? David Lublin of Seventh State writes that, “like many, I was impressed and lauded Gov. Larry Hogan’s importation of 500,000 COVID-19 test kits from Korea. … Unfortunately, there are rising concerns that the tests may not be useful. Indeed, they may have been widely available and Maryland may have overpaid for them.”

HOWARD ESTABLISHES FUND FOR NEEDY: Howard County Executive Calvin Ball said on Friday that the county has set aside funds to help feed and house needy residents during the coronavirus pandemic, Bryan Renbaum writes for MarylandReporter. Ball said that about 23,000 Howard County residents have filed for unemployment since March 27 — including about 6,000 claims filed in the past week.

CHANGES TO STATE DAIRY INDUSTRY: Hannah Himes and Graham Cullen of the Frederick News-Post write about how COVID-19 has — and will — alter Maryland’s daily industry. They report: “The vast majority of the milk produced in Maryland goes to grocery stores where there is still a demand, versus the restaurant industry and schools where demand is significantly decreased, according to one farmer. Maryland also doesn’t produce as much milk as states like New York.”

OPTING FOR HOME BIRTHS: During the COVID-19 pandemic, more pregnant women are deciding to give birth at home, writes Christina Tkacik for the Sun.

TALBOT’S COVID TASK FORCE: Amelia Blades Steward writes for the Easton Star Democrat about the Eastern Shore physicians who are part of the Talbot County Covid-19 response task force, and gleans some insights and information from them.

BAY BRIDGE GOING CASHLESS: The Chesapeake Bay Bridge is officially going cashless. Luz Lazo of the Post reports that starting Tuesday, all tolls at the bridge will be collected electronically, the Maryland Transportation Authority said.

MAYORAL CANDIDATE DEBATE OF ONE: What was originally billed by Fox 45 as a debate among Baltimore’s Democratic mayoral candidates instead became a roughly hour-long conversation with only one contender — former Deputy Attorney General Thiru Vignarajah. Three other candidates —City Council President Brandon Scott, former mayor Sheila Dixon and Mary Miller — declined the station’s invitation to Thursday night’s event for various reasons, Talia Richman and Emily Opilo report in the Sun.

HELPING THE HOMELESS DURING COVID-19: Health Care for the Homeless in Baltimore has found itself on the front lines of helping the homeless with COVID-19. Of all the fast-moving challenges in the early stages of the pandemic, finding an effective way to screen people was the most important, writes Glenn Graham for the Sun.

ACELA SERVICE TO RESTART IN JUNE: Amtrak will restore some service between Washington and New York next month, bringing back its flagship Acela, in what would be the company’s first step toward returning to normal operations since the coronavirus pandemic, Luz Lazo of the Post is reporting.

SUN BUYOUTS: Sports columnist Peter Schmuck, whose byline has been in The Sun‘s pages for three decades, took a buyout from the city’s daily newspaper. A member of the advertising staff also took the offer, said environment, science and weather reporter Scott Dance, who serves as unit chair of The Sun‘s union. This means that the newsroom is now protected from layoffs through the month of June, Brandon Weigel of Baltimore Fishbowl writes. 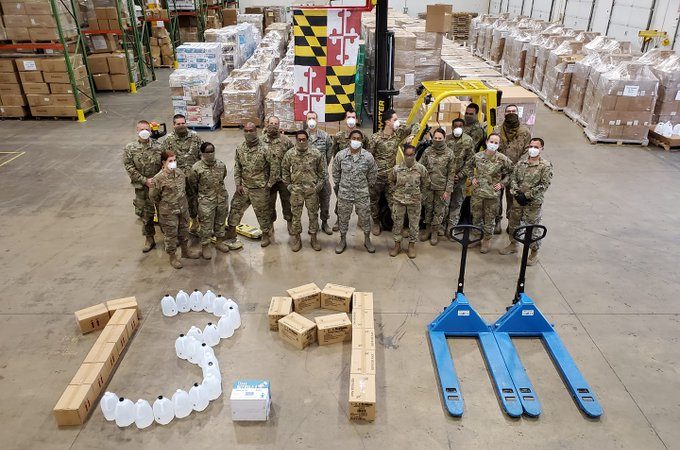 The Maryland National Guard said on Saturday that 175th Wing Airmen from the 175th Logistics Readiness Squadron have processed 13.9 million pieces of personal protective equipment for the COVID-19 pandemic.