During a news conference in Annapolis on April 10, Gov. Larry Hogan, accompanied by Labor Secretary Tiffany Robinson, both tried to reassure Marylanders who have had difficulty applying for unemployment benefits. The one-stop BEACON website was instituted two weeks later and was supposed to resolve complaints but they have persisted. (Screenshot)

Senate Finance Committee Vice Chair Brian Feldman (D-Montgomery) said handling constituent complaints about the state’s unemployment website has perhaps been the most pressing issue his office has dealt with since the General Assembly’s early adjournment in mid-March. The body adjourned early due to concerns about the spread of the coronavirus.

“I’ve gotten more calls in my office — and I think that’s true of many my of colleagues — on this one topic of the unemployment insurance website —and issues and wait times — than almost any other issue we’ve been dealing with since we adjourned. There’s been a lot of constituent work on a lot of subjects but this one seems to be in many ways a dominant one in terms of really impacting folks,” Feldman told MarylandReporter.com in a phone interview on Monday.

“Originally the problems were: calling, the line was always busy. They didn’t have enough people to take the calls. Now the issue is with the website. There’s just so much volume that the website can’t hold it. It keeps getting locked up. When people go into different parts of the website and log on to do things…there’s parts that lock up. And that’s the problem. They can’t get beyond what locks up.”

Jennings said he has consulted with Labor Secretary Tiffany Robinson about problems with the website. The department is “working 24/7” to fix the kinks, he said.

Tuesday at 1 p.m. EDT, the Finance and Budget and Taxation Committee is scheduled to hold a joint public hearing on issues related to the website. The hearing was announced in an email press release on Friday. It will be broadcast live on the General Assembly’s YouTube page. Members of the public who wish to testify must sign up on the assembly’s webpage by Monday at noon EDT. The hearing will be held on the video meeting site Zoom. 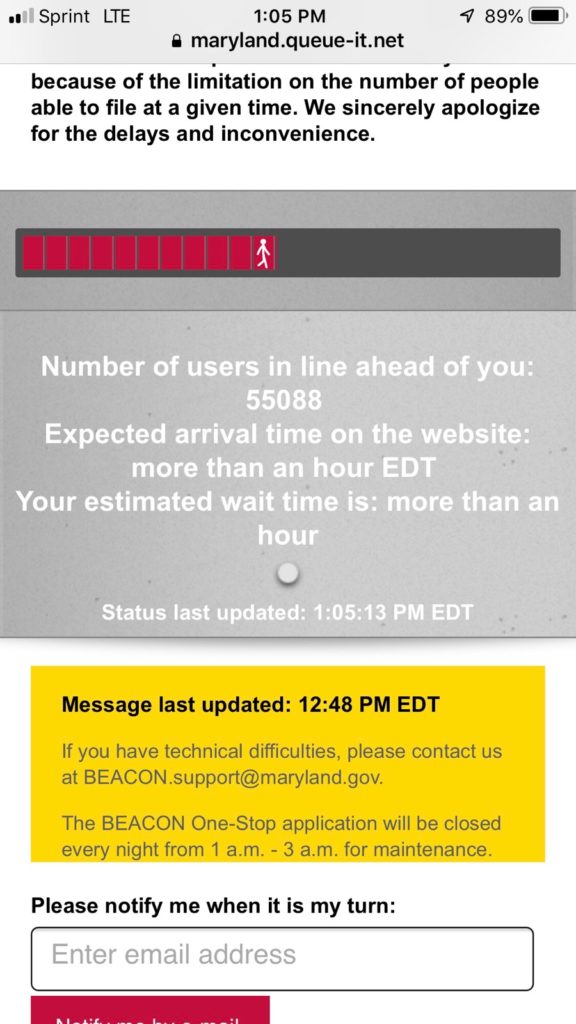 Beacon on April 28, four days after it debuted, showed that the “number of users in line ahead of you” was 55,088 and that the estimated wait time was “more than an hour.” Filers who opt to get an email when their turn arrives have 10 minutes to start a claim. The wait times fell last week, but many people still  complain about the site. (texted screenshot)

Although the site went back up shortly thereafter, many users complained that they still could not access it and those who were able to do so complained that it often locked up. A tweaked site assigned filers in a virtual que that was supposed to resolve extended wait times by telling filers how many people are ahead of them and then giving them a 10-minute window to start their application. But delays persisted and could extend over an hour, and a filer could wait behind tens of thousands of others.

The number of unemployment claims filed dropped during each week in April but the downward trend has done little to reassure small-business owners who are still uncertain when the state will reopen. Maryland lost nearly 21,000 jobs in March and the state’s unemployment rate was at 3.3 percent, according to the Maryland Department of Labor. April’s jobs report will be released later this month. The national unemployment rate is about 15 percent, according to the U.S. Department of Labor.

Both Feldman and Jennings said the primary purpose of Tuesday’s hearing is judicial oversight.

“The hearing tomorrow is basically designed to have the Senate exercise its oversight responsibility on an issue that’s probably been the biggest problem so far in terms of impacting our constituents in a real way,” Feldman said.

“I don’t think you’re going to get a cure for anything. That’s not what tomorrow is about. Tomorrow is about just to find out what’s going on as a legislative side to kind of review the system — review the process and figure out where the problems were, so that we can fix it and it doesn’t happen in the future,” Jennings said.

MarylandReporter.com asked both Feldman and Jennings if they agree with Gov. Larry Hogan’s assertion that the website “has been fixed for 10 days.” Hogan made the remark at a news conference at the State House on Wednesday. Hogan had expressed outrage over problems with the old website and vowed that the state would resolve the issues with Beacon. On Wednesday he said the state has received “seven different sets of rules” from the federal government for the website and each time, that happens, it must be updated. “I understand the frustration of people but we are performing better than just about anybody in America,” the governor said.

But Jennings disagrees with the governor’s contention that the website’s glitches have been resolved. “No,” he said. “People are still having problems. I think the majority of problems have been fixed. But there’s still some little issues every once in a while that will pop up.”

Feldman also disagreed that the problems have been fixed. “That’s what the emails and the public media representations have been. But the experience of myself and virtually every other member of the General Assembly is something very different,” he said. “And, so, we would not likely be holding a hearing tomorrow if things actually had been fixed as has been represented.”