STATE TO RELEASE NURSING HOME DATA: Amid pressure from families, patient advocates and the nursing home industry itself, Maryland officials said Monday that the state will begin releasing data on coronavirus infections and deaths at long-term care facilities this week, Scott Dance of the Baltimore Sun reports.

906 NEW CASES REPORTED DURING MORE TESTING: Officials reported Monday that Maryland has confirmed 906 new cases of the coronavirus after receiving a record-high 8,311 test results in a 24-hour span. The state has confirmed 19,487 total cases of COVID-19. Thirty-one  people died due to complications from the illness since Sunday, bringing the state total up to 858 fatalities.

200 DETAINED YOUTH RELEASED: Maryland officials have released about 200 youths from state juvenile detention facilities over health concerns due to the coronavirus pandemic, Luke Broadwater of the Sun reports.

ELECTION TO FILL CUMMINGS’ TERM TODAY: Hours before voters cast ballots in the special general congressional election to fill the remainder of the late Rep. Elijah Cummings’ term, former Rep. Kweisi Mfume (D-Md.) praised Gov. Larry Hogan for making sure the election went ahead on its scheduled date with a vote-by-mail system to limit the spread of the coronavirus. The election is on Tuesday and Mfume will face Republican Kimberly Klacik, Bryan Renbaum writes for MarylandReporter. 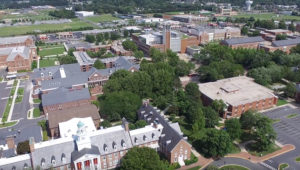 SALISBURY U. TO HOST PATIENTS, WORKERS: The Salisbury Daily Times reports that Salisbury University will be used to quarantine 100 coronavirus patients as well as a number of hospital workers. Last week, a memorandum of understanding was signed allowing Salisbury University to house patients and employees from Peninsula Regional Medical Center.

POLL: AMERICANS SUPPORT BIZ RESTRICTIONS: Scott Clement and Dan Balz of the Post write that a Washington Post-University of Maryland poll finds that Americans overwhelmingly support state-imposed restrictions on businesses and the size of public gatherings to slow the spread of the coronavirus. They also back a temporary halt to immigration into the country, as ordered by President Donald Trump, to deal with the crisis. 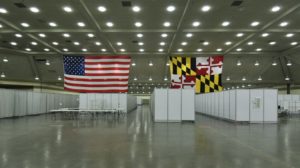 CONVENTION CENTER OPENED AS FIELD HOSPITAL: Maryland opened its field hospital at the Baltimore Convention Center on Sunday as COVID-19 cases and hospitalizations continue to grow in the state, Tim Curtis reports for the Daily Record. 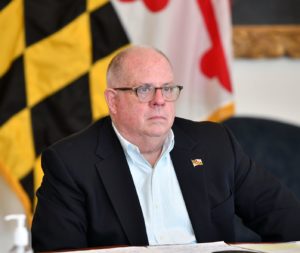 Gov. Larry Hogan is receiving accolades for his response to the coronavirus in Maryland. (Executive Office of the Governor)

HOGAN’S POLITICAL FUTURE: Ryan Little of Capital News Service writes that longtime watchers of Gov. Larry Hogan say he has managed a diplomatic minefield well while leading the National Governors Association, and walking a fine line when he criticizes the federal response by rarely saying anything negative about President Donald Trump or Vice President Mike Pence by name. His political standing appears to be rising, but the impact Hogan’s performance will have on his future political aspirations is still up in the air.

COLUMN: CRISIS MANAGEMENT IN THE STATEHOUSE: In a column for MarylandReporter, Ray Feldmann, former press secretary to two Maryland governors, writes about his experiences under a governor managing either a health crisis or an economic one, and how the current governor is managing both at once.

B’MORE TO BUY FOOD, LAPTOPS FOR STUDENTS: The Baltimore City Council voted Monday to use at least $9 million from the Baltimore Children and Youth Fund to buy pupils food, laptops and internet service for distance learning during the coronavirus pandemic, Yvonne Wenger of the Sun reports.

BIZ, NON-PROFITS SEEK HELP FROM MO CO FUND: After nearly 6,900 small businesses and nonprofits applied for help from Montgomery County’s $25 million relief fund, a first small group of them has been approved for grants, Brian Adhikusuma reports in Bethesda Beat.

WA CO SCRAPS, ALTERS GRADUATION TRADITIONS: For the Class of 2020 in Washington County — as in high schools all over the country — the COVID-19 crisis has put a halt to traditional milestones that mark that final transition to life’s next chapter. In lieu of the traditional pomp and circumstance, virtual graduation ceremonies are under strong consideration by school officials. But proms have been scrapped, Sherry Greenfield reports for the Hagerstown Herald-Mail.