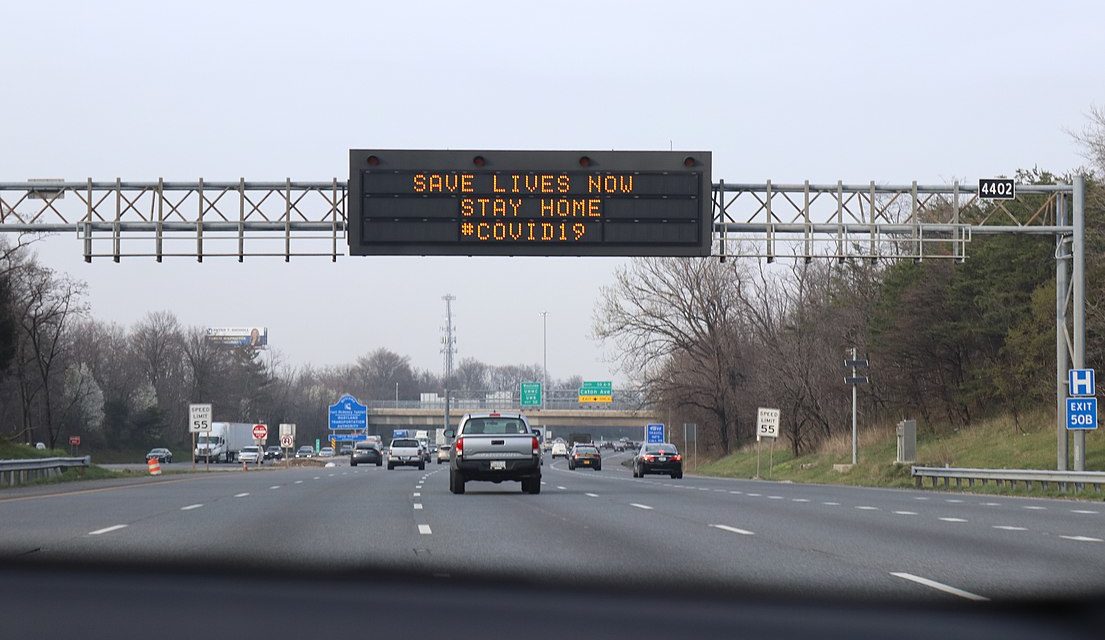 A traffic alert southbound on I-95 in Baltimore last month urged Marylanders to "Save lives now/Stay home/#Covid-19." The stay-at-home order and social distancing parameters have been devastating to Maryland's economy. But without them, state officials say, the economic impact would have been much worse. (Elvert Barnes/Creative Commons)

The coronavirus pandemic could cause a $2.8 billion overall loss in Maryland’s general fund through June 30, the state government’s top economist warned on Friday.

“This is a direct impact of the stay-at-home order,” Andy Schaufele, director of Maryland’s Bureau of Revenue Estimates, said at a virtual news conference on Facebook Live with state Comptroller Peter Franchot on Friday.

That projected figure represents 15% of the state’s general fund, which includes revenue from income and sales taxes, he said.

“The impacts are amplified due to the general fund’s reliance on revenue sources that are directly impacted by the pandemic.”

The impact of the pandemic on the state’s fiscal health is magnified by its timing, Schaufele said.

“Never have we seen such a torrent of a negative economic hit with only three months before the end of the fiscal year.”

The projections indicate that in May, 44% of the state’s annual fund would be lost and in June, 50% of the revenues would be missing.

Schaufele stressed that these preliminary stats are “the worst-case scenario,” will be updated regularly and assume that Gov. Larry Hogan’s stay-at-home order lasts through June 30.

He praised the manner in which Hogan has been handling the pandemic, as did Franchot.

“Our governor’s strong and timely response is absolutely mitigating the economic downsides of this pandemic. The stay-at-home order as well as social distancing are absolutely creating the steepest economic nosedive in modern history,” Shaufele said. “But in their absence, the final economic impacts would be far greater and played out over a much longer period of time.”

The loss of revenue from income taxes is projected to be just under $1 billion, he said, showing a chart. He said income-withholding taxes comprise 45% of the entire general fund and have been hit hard by lost jobs, reduced hours, furloughs and “a lack of regular turnover hiring.”

Meanwhile, sales tax accounts for 25% of the general fund, he said.

“So right off the bat, seventy percent of the general fund is immediately and directly at risk.”

But he said some of the loss of sales-tax revenue will be recaptured after the stay-at-home ends and people return to stores to shop.

Schaufele called the pandemic’s impact on employment in the state unprecedented. He showed a chart in which a line representing “the cumulative initial unemployment claims” shot up at a sharp angle. He said approximately 240,000 such claims were filed in the first three weeks of March,

“I have never seen a line like this in a chart, and we all know I spend the majority of my time looking at charts.”

Earlier, Franchot said new unemployment filings in Maryland increased an astonishing 5,200% in just under a month. He noted that the Maryland Department of Labor announced on Thursday that 108,508 people filed new unemployment claims in Maryland last week, compared to just 2,090 new filings for the week that ended on March 6. The comptroller pointed out that the unemployment stats do not include people who have been unable to file due to overwhelmed systems, whose hours have been cut or who have given up searching for work.

Franchot said “each and every one of these unemployed Marylanders are snapshots of a terrifying moment in time. They are casualties of the worst public health crisis and the most devastating economic catastrophe of our lifetimes.”

The pandemic has been devastating to many small businesses in the state, he said.

“I have personally spoken in the last few weeks with countless business owners who have already told me they have no choice but to shut their doors for good,” he said. “These local, independent. community-based businesses are the beating heart of the state’s economy.”

Franchot said he has repeatedly warned throughout his tenure that the state should set aside ample funds “to weather unexpected fiscal and economic storms that may come our way.

“Trust me, the storm has finally arrived and it is stronger and more devastating than we’ve ever seen before. Thousands of businesses have had to close their doors, hundreds of thousands of people now find themselves without a job – either temporarily or permanently.”

Franchot warned that tough choices are ahead for state lawmakers and officials.

“A lot of our fellow Marylanders are hurting and desperate right now through no fault of their own and the road to economic and fiscal recovery will be long and difficult; I don’t want to sugarcoat this. In the coming months and over the foreseeable future, the governor, the Board of Public Works and the General Assembly will have to make very, very difficult decisions to ensure our state’s short-term and long-term fiscal stability.

He said public health experts must be the ones who determine “the timeline and pace for when we return to normalcy…But as comptroller, I believe it is critically important to understand how a prolonged shutdown will impact our revenues and the government programs and services that Marylanders need and depend on.”

“The state’s fiscal leaders will need to find opportunities to balance the budget that have likely never been discussed before. We should plan for the worst and hope for the better.”