54 NEW COVID-19 POSITIVES: Fifty-four cases of coronavirus were reported in Maryland on Sunday, bringing the state’s total to at least 244. Three people have died, the Sun’s Yvonne Wenger and Phil Davis report.

HOGAN URGES SOCIAL DISTANCING: Kelsey Kushner of WJZ-TV reports that Gov. Larry Hogan said Sunday that he is aggravated by people failing to heed warnings about the necessity of social distancing to blunt the spread of the new coronavirus and called for stricter enforcement.

STATE WORKER PAY HIKES END: The Sun’s Phil Davis reports that Gov. Larry Hogan’s administration has halted pay increases for state employees working during the coronavirus outbreak, saying the state has “taken every reasonable and appropriate measure to protect employees and control the spread of this disease in our facilities.”

FIX DIES FOR COMPENSATION TO WRONGFULLY CONVICTED: Heather Cobun of the Daily Record reports that the Maryland General Assembly failed to pass legislation that would streamline the process for the wrongfully convicted to receive compensation and other benefits, frustrating advocates who hoped that years of work would finally pay off.

BILLS TO CURB ROAD WIDENING FAIL: For the second year a row, legislation to place restraints on Gov. Larry Hogan’s effort to widen I-495 and I-270 has failed in the General Assembly, Louis Peck of Bethesda Beat reports.

OPINION: SAVING DEMOCRACY: “In Maryland, a special election to replace the late Rep. Elijah Cummings will be conducted entirely by mail.” Other states also are holding mail-in only elections, Nick Corasaniti and Stephanie Saul write in the New York Times op-ed pages. “As the coronavirus outbreak upends daily life and tears at the social fabric of the country, states are rapidly searching for ways to protect the most sacred institution in a democracy: voting.”

CORONAVIRUS FALLOUT: LOCAL GOVTs CHALLENGED BY BUDGETING: As local governments in Maryland race to contain the spread of coronavirus, they know another enormous challenge is just around the corner — balancing their budgets amid an economic and health crisis, Alison Knezevich writes in the Sun.

CRAB INDUSTRY IN LIMBO ON FOREIGN WORKERS: While the federal government announced March 5 that it would release an additional 35,000 temporary visas for foreign workers for the region’s crab industry, the sweeping coronavirus pandemic has thrown doubt on when and if the additional 35,000 workers will arrive, said Amanda Wright, CEO of Virginia-based Phoenix Labor Consultants. She said releasing those visas “is not even being talked about now” at the federal government, Jeremy Cox writes in a Bay Journal story reprinted in Maryland Reporter.

OCEAN CITY CLOSES BEACH, BOARDWALK: Phil Davis of the Sun reports that Ocean City is closing its beach and boardwalk to visitors as officials look to keep people away from the Eastern Shore resort town amid the ongoing coronavirus outbreak.

GARRETT UNDER STATE OF EMERGENCY: In light of the first two confirmed cases of COVID-19 in Garrett County, the board of commissioners declared a state of emergency, effective at 5 p.m. Sunday, reports Joseph Hauger of the Garrett County Republican. 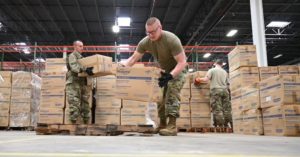 NATIONAL GUARD IN B’MORE: The Maryland National Guard on Friday evening began setting up operations in Baltimore City to respond to the coronavirus pandemic, Brandon Weigel of Baltimore Fishbowl is reporting.

STATE LOSING GROUND: Maryland has made strides in upgrading some of its infrastructure but has lost ground in other areas, a report card from a national group of civil engineers concluded last week, Bruce DePuyt of Maryland Matters reports.

GUN SALES ON RISE: Many gun buyers seem worried that the exponential spread of Covid-19 will lead to a season of hard-to-find essentials — of illness-related disruptions in the grocery supply chain — with angry have-nots out to steal from the haves, Paul Duggan and Rachel Weinerreport in a Post story on the rise in local gun and ammo sales.

SBA OFFERS PANDEMIC-RELATED SMALL BIZ LOANS: The U.S. Small Business Administration has issued a “declaration of economic injury” for Maryland in response to the coronavirus pandemic. That makes the state’s small businesses eligible for low-interest loans of up to $2 million, Jeff Barker of the Sun writes.

DISTILLERIES SWITCH TO CREATING HAND SANITIZERS: The Sun’s Sameer Rao reports that in a move that echoes efforts across the nation, from Vermont to California, at least five Baltimore and Maryland liquor distilleries have started making another high-demand product — hand sanitizer.

LIQUOR SALES UP TOO: As the coronavirus outbreak has caused an economic hardship across Maryland since many small businesses have been ordered to close their doors, one particular type of business has thrived: liquor stores, Steve Bohnel reports in the Frederick News-Post.

OPINION: DEFENDING NONPROFITS: In a column for Maryland Matters, 18-year-old Lintaro Donovan of Montgomery Blair High School in Silver Spring implores U.S. Rep. Jamie Raskin to defend the financial stability of nonprofits, which help so many people, during the coronavirus pandemic.

ALSOBROOKS EMPLOYEE CHARGED WITH ATTEMPTED MURDER: An employee in the office of Prince George’s County Executive Angela Alsobrooks (D) has been charged with attempted first- and second-degree murder, Rachel Chason of the Post reports. The person has been fired.