Responding to employers’ calls, including those of crab meat processing companies in Virginia and Maryland, the federal government announced March 5 that it would release an additional 35,000 temporary visas for foreign workers.

That still may not be enough to quench the Chesapeake Bay seafood houses’ demand for temporary workers, according to the trade group that represents the industry. And they may still arrive too late to help much or perhaps get stuck on the other side of the border, as the United States today closed its Mexican border for unessential travel because of coronavirus concerns.

Several seafood company owners and watermen had implored the Trump administration to issue 64,000 more visas, the cap set by Congress.

Jack Brooks, co-owner of J.M. Clayton Seafood Co. in Cambridge,  and president of the Chesapeake Bay Seafood Industries Association, said he expects a worker shortfall, despite the government’s action.

Initially, the Department of Homeland Security doled out 33,000 work visas, which are in effect for six months beginning April 1. With the added 35,000 visas, the total still falls well short of the 100,000 slots that U.S. employers nationally had sought to fill.

The agency will likely conduct a lottery to determine which companies obtain visas, Brooks said.

“It’d be great to think that all of [the crab houses] get lucky and win, but I don’t think the odds are great that they all get staffed up,” he said.

The temporary visas, known as H-2B visas, are made available annually to workers in seafood, landscaping, construction and other seasonal fields. To be eligible, employers must prove there aren’t enough domestic workers willing or able to fill the positions.

Only three of the county’s nine picking houses had received their workers during the first visa release, businesses say.

Now, because of the sweeping coronavirus pandemic, it’s unclear if and when the additional 35,000 workers will arrive, said Amanda Wright, CEO of Virginia-based Phoenix Labor Consultants.

Releasing those visas “is not even being talked about now” at the federal government, said Wright, whose clients include Chesapeake seafood processors.

Mexico is one of the main sources of seafood workers. Its likely they will be considered essential workers, but the United States has shuttered its embassy consulates in Mexico, which threatens to halt the visa application process.

Still, the government signaled it would continue processing workers who have previously participated in the program. The requirement for a face-to-face interview would be waived.

Meanwhile, Guatamala, another major supplier of H-2B workers, closed its borders for at least 15 days beginning March 16, adding more uncertainty to the situation. 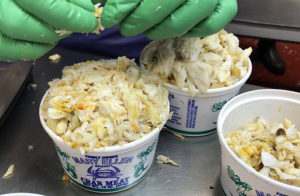 At picking houses, workers scoop meat from freshly caught crabs and collect the chunks into plastic containers to be sold to restaurants and retailers. The processors often struggle to find enough local employee, so the turn to foreign workers. (Jeremy Cox/Bay Journal)

Even if the administration were to begin taking employer applications immediately, Brooks said, the earliest that crab houses could expect to welcome the workers would be in early May. The Maryland crab season kicks off April 1.

“Customers are wondering, ‘Where am I going to get the crab meat?’” Brooks added.

A crab house that doesn’t receive any workers could be forced to close its doors for this season, with the possibility that it might never reopen because its customers and suppliers will have moved on, industry leaders say.

Seafood is one of the island’s only industries. It is home to eight of the state’s 20 crab-picking houses.

“I hope everyone can see this is more than a job issue. [It’s] more of an American community issue,” said Aubrey Vincent, sales manager at Lindy’s Seafood on Hooper’s. “A lot of these family businesses are holding on by a thread.”

At picking houses, workers scoop meat from freshly caught crabs and collect the chunks into plastic containers to be sold to restaurants and retailers. The processors often struggle to find enough local employees, especially in places like Hooper’s Island, on Dorchester’s isolated coastline, which is a winding, 40-minute drive to the nearest Walmart and movie theater.

So, the businesses turn to foreign workers, mostly from Mexico. The jobs may be seasonal, but many workers return to the same employers year after year, industry members say.

“I consider these H-2B workers part of my family,” said Darlene Ruark of the W.T. Ruark & Co. picking house. “My son grew up with those workers, and they consider him family, too.”

But for the last 15 years, some picking houses have been left waiting for months to receive their workers or have been shut out altogether from the program. In 2018, for example, a new lottery-style allocation system left Dorchester’s processors with a 40% shortfall of foreign workers four months into the six-month season.

The region’s seafood industry blames the visa shortage on increasing competition from other business sectors. But above all, they blame Congress for not heeding their repeated calls to set a higher cap or separate seafood workers into a separate visa class.

“Isn’t this a bunch of B. S. that our government is here trying to put us out of business?” asked A.E. Phillips and Sons CEO Steve Phillips. “It’s stupid. It’s something that can be fixed in five minutes.”

Homeland Security temporarily raised the cap by as many as 30,000 workers in recent years to help meet business’ demands. Maryland Gov. Larry Hogan and several members of Congress from Maryland and Virginia had called on the administration to take that action once again.

Hogan described the additional visas as “welcome relief” but implored that “we still urgently need a long-term solution to this problem.”

The Maryland Department of Agriculture released an economic study on the day of the Hooper’s event, showing that the state’s economy would take up to a $150 million hit without the visa workers in the seafood industry.

This article is republished with permission from the Bay Journal.

Gubernatorial candidates divided on how to adjust or cut state taxes