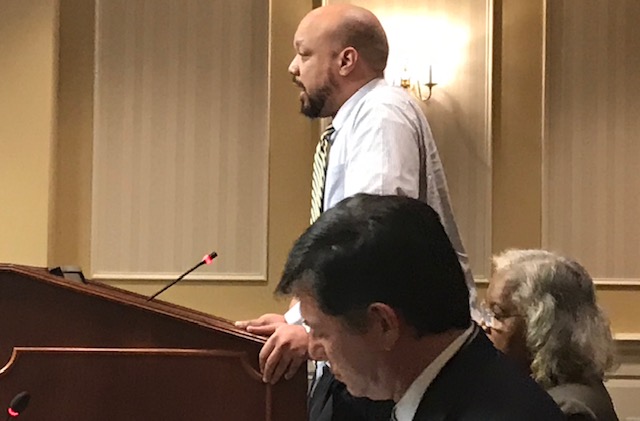 Curtis Brooks spent 24 years in prison after a fatal car jacking in Colorado when he was 15. He is seen here testifying at Tuesday's hearing before the Senate Judicial Proceedings Committee, along with Sen. Joanne Claybon Benson. She told the panel about his tough childhood and her long battle to get him freed from prison after he was sentenced to life without parole —even though he was not the one who shot the victim (MarylandReporter.com)

Sen. Joanne Claybon Benson (D-Prince George’s) urged a panel of Maryland lawmakers on Tuesday to change the state’s felony first-degree murder statute, arguing that it often targets those who may have been party to a felony in which a murder took place — but the person charged was not the one who actually committed the murder. She spoke in favor of legislation to change the law.

Benson relayed the story of Curtis Brooks to the Senate Judicial Proceedings Committee. Brooks was an elementary school student when Benson was the principal at John Bayne Elementary School in Capitol Heights in the mid-1980s. Brooks, who had been abandoned by his mother as a child, struck a bond with Benson. They lost touch when Brooks moved to Denver at 15 to join his mother, who was a drug addict. But she soon kicked him out of the house and the teen got into trouble with the law.

“Curtis was homeless for a period of time and wandered to an arcade…He got to the arcade and met three other children and these children were on a crime spree. Curtis Brooks had never, ever, ever been in any trouble — had never been incarcerated….it was snowing…And one of them said: ‘We’re not going to walk in the snow — let’s steal a car.’

“The first car came and the guy who was driving the car got away. The second car came, the guy got out of the car and began to have an argument. And one of the children pulled out a gun and killed the man. 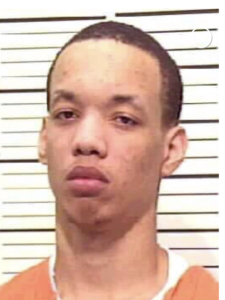 “Curtis Brooks, who’s never been in an ounce of trouble — talented and gifted-articulate — tried to help the little man…the police came and arrested the four of them. They went to court. Curtis Brooks, who’d never been in an ounce of trouble, never shot anybody, never killed anybody, never meant harm to a single soul — was sentenced to life with the possibility of parole at the age of 15 years old. He served 24 years in Denver, Colorado for a crime he didn’t commit. And he was charged with felony murder.”

Benson relayed that she visited Brooks in prison and became active in the effort to secure his release. Benson said with help from Maryland politicians and Colorado defense attorneys they were able to convince the legislature in Colorado to change the law and secure a hearing for Brooks. With help from Colorado’s then-governor, John Hickenlooper — who granted clemency — Brooks was released was from prison last July. Benson said Brooks’ experience in Colorado’s criminal justice system is part of the impetus behind her effort to change Maryland’s felony first-degree murder law.

Brooks testified in favor of Benson’s legislation at Tuesday’s hearing.

“It’s very hard to live in a life where people are held accountable for somebody else’s actions. It’s extremely hard when you have a child that’s held accountable for another child’s actions. But at the end of that when the law says that really there is only one sentence that can be given and no consideration to the character of the individual or the crime that was committed — it becomes a difficult thing. And I had 24 years to reflect on that and to know the consequences of that. And I would just like the scope of that law to be changed to where consideration can be given … to where the aspects of the crime can bear fruit and reflection on the sentence that a person is faced with and has to live with.”

Two panels compromised of attorneys and legal experts testified in favor of the legislation.

Sen. Chris West (R-Baltimore County) expressed concern that the legislation would lead to a mass exodus of prisoners being released because many would be eligible to have their sentences reconsidered.

“If this bill is passed would it not be fair to say that thousands of people who are in jail right now for felony murder would be applying to have their sentences reduced to no more than 40 years?”

A panelist told West it is likely that some prisoners would make that request.

The legislation, SB951-Criminal Law-Felony First-Degree Murder-Limitation and Resentencing Procedure, would, according to its text, alter the “provisions relating to murder in the first and second degree.” It would authorize “persons convicted of felony first-degree murder to apply for resentencing.” It would authorize a court “to vacate a certain conviction and sentence and resentence a person under the penalties provided for second-degree murder.” It would “prohibit a court from increasing the sentences of certain persons.”