Pet owners may cherish their furry companions, but not their incessant bark or shrill meow. In some cases, owners actually seek to have their cat or dog’s vocal cords surgically removed.

Gov. Martin O’Malley gave his signature to unsung legislation that outlaws this practice, one that the bill’s advocates said is inhumane and often frustrating for the animal.

Licensed veterinarians may still operate on a pet’s vocal cords to alleviate pain from an illness.

Paralyzing or a removing a pet’s vocal cords is often authorized by pet owners who struggle with training a noisy dog or cat, according to Jen Swanson, executive director for the Baltimore Humane Society.

Surgery can cause complications

Behavioral issues may also arise later. Barking and growling, especially for dogs, allows them to demonstrate a full range of emotions such as fear or frustration. Not allowing a dog this outlet can lead to bites as a substitute for expression.

A dog or cat is not completely silent after a surgery, rather he or she emits a harsh rasping or whispering sound.

Swanson said she was pleased the legislation passed and trekked to Annapolis to testify on its behalf. She suggested owners hire a behavioral trainer or specialist if they are concerned with a rambunctious pet.

“There’s always a reason,” she said.

A representative of the Maryland Veterinary Medical Association, William Erskine, expressed some concerns during the bill’s February hearing in the Senate Judicial Proceedings Committee. Erskine said pet owners often undertake devocalization as a last-ditch effort to keep a pet, but if the surgical option is eliminated, then these animals might instead be delivered to a shelter and then euthanized if a new home isn’t found.

Erskine said the MVMA agreed that only veterinarians should be allowed to perform the surgery, as sometimes breeders carry out the procedure.

The American Veterinary Medical Association has maintained a position that devocalization should only be performed as a final alternative if other “behavior modification” fails. Literature on the association’s website acknowledges the possible implications of surgery.

“We agree with the bill’s intent,” Erskine said during the hearing. “But we’re concerned about increased euthanasia.”

Sen. Nancy Jacobs, R-Harford, was the lone dissenting vote in the Judicial Proceedings Committee. Jacobs said a dog owned by family members received the operation and suffered no side effects — Jacobs said she also knew of a local, long-time breeder who found it necessary to devocalize his animals so as to not disturb the surrounding community.

Montgomery County Democrat Del. Ben Kramer, sponsor of the House version of the bill, said while he understood the breeder’s situation, he advised that either the breeder relocate or simply find an alternative to devocalization.

“It is a cruel practice,” Kramer said.

Maryland joins New Jersey and Massachusetts who have enacted similar laws. Maryland’s legislation carries a $1,000 for the first offense and up to 90 days in prison, while second offenders face up to a $2,000 fine and a year in prison. 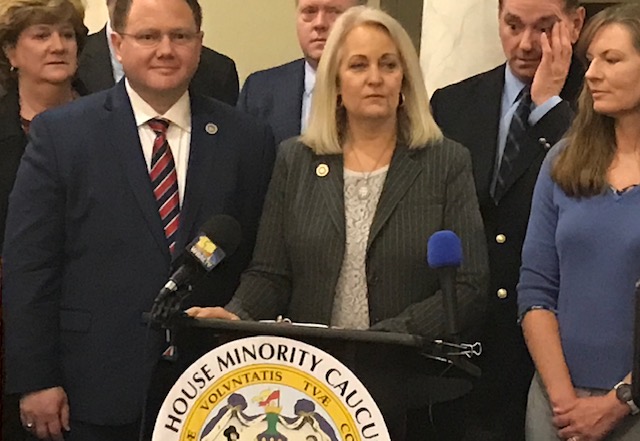