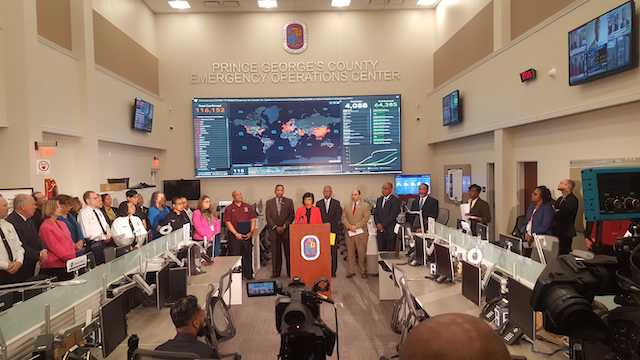 Maryland officials on Tuesday announced two new positive cases of COVID-19 in Prince George’s County — bringing the state’s total to eight — amid a push for increased resources to battle the growing crisis.

There are now three known cases of the coronavirus in Prince George’s, County Executive Angela Alsobrooks said Tuesday, standing in front of a giant digital world map of the latest virus numbers.

A Prince George’s couple, officials confirmed Tuesday, contracted the virus while traveling internationally on a cruise ship. And yesterday evening, Alsobrooks said, a woman in her 50s tested positive for the virus after traveling to Boston.

Alsobrooks said the county has raised the level at the Emergency Operations Center and Joint Information Center from “enhanced” to “partial activation,” allowing for more resources to go toward battling the virus.

Workers at the Gaylord National Resort located at the National Harbor were alerted by the county that an attendee from New Jersey at the Conservative Political Action Conference held in February tested positive for the virus; Carter said workers were told to see a physician and stay home if they began experiencing symptoms.

“The most important message that we want to send to parents is to please keep their children at home if they are ill,” Stanton said.

There are four additional confirmed cases in Montgomery County and one in Harford County.

In a press conference Tuesday in front of his full cabinet, Gov. Larry Hogan said he expects the number of confirmed cases to rise throughout the country as more people are tested.

“This problem continues to evolve and escalate rapidly,” he said, calling the response an “all hands on deck operation.”

Hogan declared a state of emergency Thursday, giving the state flexibility to better coordinate among different agencies and to utilize various resources to help fight the disease, which continues to spread in Maryland.

Hogan also submitted emergency legislation, passed unanimously last week by the Maryland Senate and the House of Delegates, which would allow the state to transfer up to $50 million from its rainy day fund.

Hogan, who also serves as chair of the National Governors Association, has stepped into the national spotlight during the epidemic, appearing on national television, working with U.S. Vice President Mike Pence and other governors, and stressing the need for bipartisanship.

During a Sunday appearance on NBC’s “Meet the Press,” Hogan praised the efforts of Pence and his team, while acknowledging he hasn’t been pleased with President Donald Trump’s response, which has often contradicted statements made by public health officials.

“He hasn’t communicated the way I would and the way I might like him to,” Hogan said of the president.

Older people and those who have serious chronic medical conditions such as heart disease, diabetes and lung disease may be at higher risk, according to the Centers for Disease Control.

Earlier Tuesday, Hogan said during his press conference, he met with representatives from the state’s long-term care community. In hopes of preventing an outbreak similar to the one in a Washington state nursing home where 18 people have died, Hogan said, facilities should limit visitors, staff members should avoid international travel and facilities should use online methods to facilitate communication.

As of March 10, there have been 647 reported cases of COVID-19 and 25 deaths in the United States in 36 jurisdictions, including Washington, D.C., according to the CDC website.

Hogan announced March 3 that the state’s Public Health Laboratory was approved for COVID-19 testing, which allows local cases to be tested and diagnosed more quickly in the Maryland Department of Health’s Baltimore labs rather than waiting for results from the Centers for Disease Control labs in Atlanta.

Maryland Senate President Bill Ferguson, D-Baltimore, and Sen. Clarence Lam, D-Baltimore and Howard counties, introduced legislation that would allow for telehealth services to treat patients remotely, restrict price gouging — of food, water, medicine, cleaning supplies and more — and allow for those who may not have insurance or full coverage to get tested and receive vaccines when available.

“We’re seeing rising cases of COVID-19 throughout the state,” Lam said. “I think the legislature needs to take some proactive steps to be able to empower the governor with the tools that he needs to really respond to this public health crisis.”

“It does make sure that we do not forget those that are most vulnerable, and that includes folks that may not have insurance … you can still get tested,” Lam told Capital News Service. “And once we have a vaccine, which is probably a year out, it also says that they would not have to pay for that vaccine.”

Lam added that he expects the legislation to advance in the General Assembly this week.

As of March 9, the World Health Organization reports 109,577 confirmed cases of COVID-19 and 3,809 deaths in 104 countries/territories/areas.

Wall Street rebounded Tuesday, with small gains as of Tuesday afternoon after suffering its worst day since 2008 a day earlier. Trading was halted for 15 minutes Monday after the S&P 500 fell more than 7% Monday, triggering a market circuit breaker designed to slow trading down and allow investors to evaluate market conditions.

University System of Maryland Chancellor Jay Perman in a statement on Tuesday urged all system universities to prepare students to remain off campus for two weeks after next week’s Spring Break.

The statement also indicated some state universities may need to cancel classes this week in preparation for such a change; Towson University has announced it will cancel classes for the week beginning Wednesday.

The University of Maryland Medical System on Tuesday announced changes to the visitor policy at its 13 system hospitals and other healthcare facilities.

According to a press release, all UMMS visitors must check in at the front desk, visitors younger than 18 will be limited, adult visitors are limited to one per patient, visitors may be screened for flu-like symptoms and denied access if those symptoms are present, and visitors with international travel may not visit until 14 days after returning to the United States.

The new coronavirus is also taking a toll on Maryland businesses. The Capital News Service reported Feb. 28 the state could feel the effect of a strained global supply chain later this month or next month. Shipments to the Port of Baltimore have already been delayed or cancelled because of the outbreak.

Due to a lack of overseas goods and services available to fill container ships, The Seagirt Marine Terminal at the Port of Baltimore closed on Thursday and will close again on March 17.

–Hugh Garbrick and Wesley Brown contributed to this report.