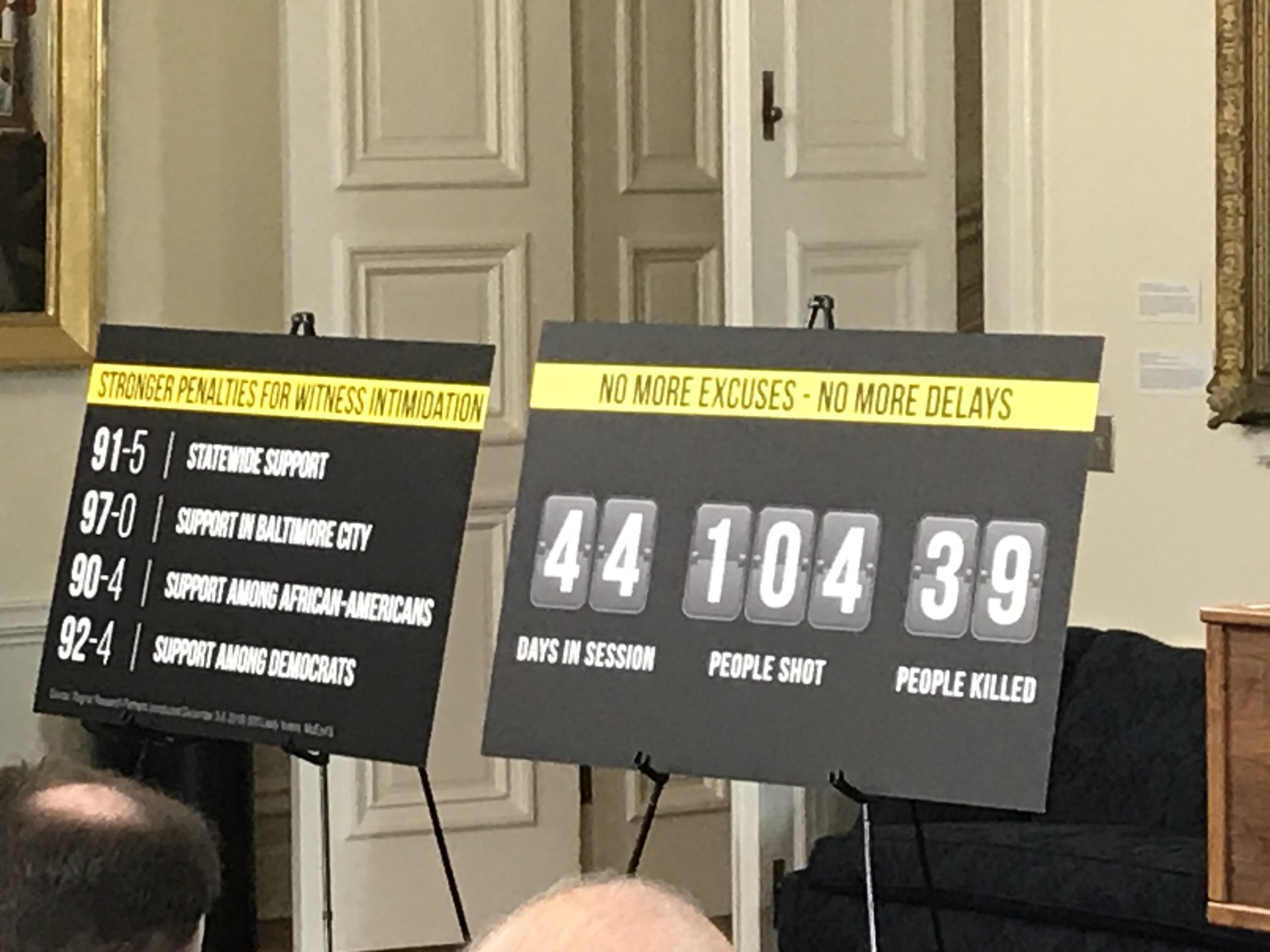 Signs displayed at Gov. Larry Hogan's news conference Thursday at the State House in Annapolis supported his call for the legislators to approve his crime package. The sign in the foreground shows the number of homicides and shootings in Baltimore since the legislative session began on Jan. 8. (MarylandReporter.com photo)

Gov. Larry Hogan on Thursday implored members of the General Assembly to take immediate action on a series of bills aimed at reducing violent crime in Baltimore City.

“We don’t want to hear any more excuses. There cannot be any more delays. We need to stop playing politics. Pass these bills. Get them to my desk so I can sign them and we can begin to stop the killings and get these violent murderers and shooters off the streets and behind bars, so that the people of Baltimore can take back their communities once and for all.” 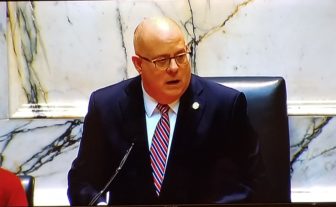 At Gov. Larry Hogan’s State of the State address on Feb. 5, he urged legislators to make addressing violent crime in Baltimore the top priority of the legislative session. (MarylandReporter photo of screen grab)

Hogan noted that the 90-day legislative session is about half-way over and that since it began on Jan. 8, 104 people have been shot and 39 people have been killed in Baltimore. He praised Democrats for introducing their own crime control legislation but said the proposals would not be as effective as the ones his administration proposed. The governor reiterated his Feb. 5 State of the State plea in which he said lawmakers should make addressing violent in crime in Baltimore their foremost priority. He had announced the proposals a day before the session began.

Hogan chided Senate Judicial Proceedings Chairman Will Smith, D-Montgomery, for having said in an interview with the Baltimore Sun on Wednesday that the committee would not move forward with the Violent Firearm Offenders Act unless provisions related to mandatory minimum sentences are taken out of the bill. In the same interview Hogan said lawmakers who are preventing passage of the bill should step down. The legislation would increase penalties for those who commit gun violence. Hogan was asked if his call for the lawmakers to step down was inappropriate. He said it was not.

“Yesterday the chairman of the Judicial Proceedings Committee said they have no intention of ever acting on this bill. I can tell you that 85 percent of all the people in Maryland strongly disagree with him and that they are going to demand that they take action,” the governor said.

Hogan said he spoke with Smith at a breakfast for the Black Legislative Caucus that was held at the governor’s mansion on Thursday morning. Hogan would not reveal the contents of their conversation but said he felt that progress has been made on moving some of the bills forward. But Hogan said substantial disagreement remains on the Violent Firearm Offenders Act.

Smith responded to Hogan after his committee gaveled in on Thursday afternoon. 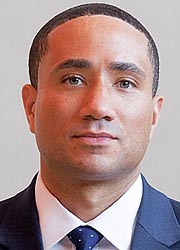 “And by the way, we have destroyed and decimated generations of Marylanders — most of whom are black and brown… I think that wielding that tool of mandatory minimums and that kind of hyperbolic statements is intellectually dishonest. I’ve seen no data to suggest that that’s going to increase the security proposition in our state.”

Smith invited Hogan to come before the committee and make the case for new mandatory minimum sentences.

“I would ask the governor, if this is such a priority, and if he has data to support for implementing new mandatory minimums, then please come down to this committee and give it to us. And present it to us. And then we can wrestle with it and have an intellectually honest conversation.” 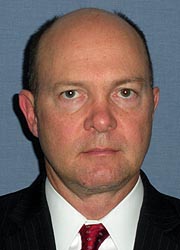 “I think what you’re seeing is just a general frustration…it’s beyond question that six years ago Baltimore City transitioned from a priority of law enforcement to shifting to other priorities for criminal justice. And we’re seeing the results of that.

“At some point, there’s got to be consequences for bad behavior. And whether that’s mandatory minimums or something else — the status quo isn’t working.”

He said the city is still facing the same challenges it did “six years ago, when murder and violent crime was trending down.”

At least 348 people were killed in Baltimore last year.