A version of this column appears in the February issue of The Business Monthly newspaper, serving Howard and Anne Arundel counties. It has been updated to reflect last week’s hearing.

Gov. Larry Hogan takes credit for record after record in spending on schools and sick people. And then he lambasts the spending mandates in state law that control 83% of the budget and drive the record spending – though in some cases Hogan has added money to the mandated spending.

In many cases, he takes credit for what he is forced to do. But given the mandates, it is no small feat to balance a state budget where expenses are rising faster than revenues, and to do it with no new taxes.

Democrats this session are pushing for one of the biggest increases in spending mandates to fund the sweeping school reforms of the Kirwan Commission on education. These include universal pre-Kindergarten, enhanced services for schools in impoverished areas, better career, and technical education, and higher pay for teachers.

Hogan has agreed to fund the start of these mandates – but balks at any further changes that will balloon the budget and require higher taxes.

The new Democratic Senate president and House speaker – the first change in legislative leadership in decades – have recognized that Marylanders feel they are already overtaxed. This strong voter sentiment helped Republican Hogan get reelected twice in a Democratic state.

Senate President Bill Ferguson and House Speaker Adrienne Jones both have ruled out increasing the sales, income or property taxes – this year at least.

Taxed too much, voters tell pollster

A new poll commissioned by the House Republican Caucus puts hard data behind the opposition to any tax hikes. The survey by longtime Maryland pollster Patrick Gonzales found that voters in every subgroup thought they paid too much in taxes. That included 60% of Democrats, 78% of Republicans, 72% of women and 73% of African Americans. (The poll question did not distinguish between federal, state and local taxes. The poll of 838 likely voters has a margin of error of plus or minus 3.5%) 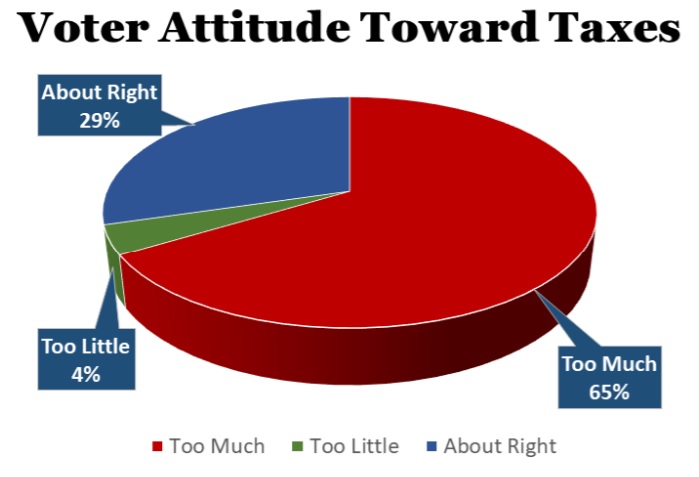 When fully implemented in 10 years, the Kirwan recommendations are expected to cost $4 billion more a year than is already spent on public schools which is now about $15 billion statewide, $7.3 billion coming from the state. The state would pay about $2.8 billion more in the 10th year, and the counties $1.2 billion more. Of course, they are taking money from the same taxpayers.

Scrambling for other sources

That’s why legislators are scrambling for other sources of taxes that do not hit Marylanders in their personal wallets.

A referendum to approve sports betting has been introduced again. Based on the experience in Nevada, legislative analysts estimate that sports betting might only bring in $35 million, chump change for the huge budget. Legalizing recreational marijuana has been put off the table this year, but medical marijuana brought in $10 million in taxes last year.

Ferguson and his predecessor, Senate President Emeritus Mike Miller, are proposing a novel idea to tax digital advertising (SB2), primarily the kind you find from Google and Facebook. The bill expressly targets companies that bring in more than $100 million in global ad revenue. The biggest companies with billions in total sales would pay up to 10% tax based on where the ads are appearing on a device registered in Maryland.

A hearing last week drew the expected a long list of opponents, from Comcast and advertising trade groups to the Motion Picture Industry and Maryland-Delaware-D.C. Press Association. (Disclosure: I am treasurer of MDDC and sit on its board.)

The opponents cited legal, constitutional and technical problems with the bill, problems also cited by the legislature’s own staff. There’s federal law that may prevent it, there are U.S. Supreme Court and Maryland court decisions that say it would be a violation of the first amendment, and there are all sorts of technical issues that might make it difficult to track. Making the tech giants pay more than Maryland advertisers may also violate the commerce clause of the U.S. Constitution.

A group of Montgomery County legislators are proposing a carbon tax on energy use and polluters, with part of the proceeds going to Kirwan funding. The bill also includes a tax on gas guzzling autos and SUVs, however that might be defined.

Sen. Paul Pinsky, D-Prince George’s, and other progressive groups have proposed that old chestnut, combined reporting of the corporate income tax. This tries to target out-of-state corporations that supposedly do not pay their fair share in state taxes, such as Walmart. SEIU, the service employees union, and a group of progressive legislators has also proposed an increase in the state personal income tax for earners making over $1 million but that is a nonstarter for the presiding officers.

As the economy has changed to emphasize services rather than goods, especially online, this is an area of opportunity for tax-writing legislators, hence the digital advertising tax. But attempts to tax services have failed before.

The most glaring example occurred in 2007 when the Maryland legislature passed a package of tax increases – including the current 6% sales tax — that taxed computer services to the tune of $200 million a year. The computer industry was taken by surprise but pushed back so strongly that the legislature repealed it before it could take effect.

Lawmakers then added a temporary surcharge on millionaires, which pushed some of them to Florida and other states that have no income tax.

The hard part is devising a service tax that captures some of that huge market without hurting the local economy or forcing companies to leave the state, as a tax on accounting or legal services might do.

The challenge won’t keep legislators from trying, despite Hogan’s opposition to any new taxes.