A foraging calf surfaces in the Potomac River. (Photograph taken under NMFS Permit No. 19403 by Ann-Marie Jacoby)

A team of researchers studying dolphins in the Potomac River got unexpected fruit from their labors last month when they witnessed a dolphin being born near the river’s confluence with the Chesapeake Bay.

Bottlenose dolphins are among the most studied species in the world, but a wild birth has only been documented in scientific literature on one other occasion: in 2013 off the coast of Georgia.

“I was beyond excited,” said Ann-Marie Jacoby, a Ph.D. student at Duke University and associate director of the Potomac-Chesapeake Dolphin Project, who witnessed the birth on Aug. 17.

Jacoby began working on the dolphin project, which was launched in 2015, while a graduate student at Georgetown University. The university supports the work led by Georgetown biologist and professor Janet Mann.

“We have been trying to understand why dolphins come into the Potomac River and the Chesapeake Bay,” Mann said. “We see some very young calves and we see lots of mating behavior, but this is the most definitive evidence we have that they have their calves here.”

Although dolphins are not new to the Chesapeake Bay, they appear to be cropping up more frequently in recent years and have been studied, for the first time in the Potomac, over the last five years. Researchers are trying to figure out whether there are, indeed, more dolphins in the river than in recent history and, if so, what’s drawing them there.

Now, they have some evidence that the bottlenose dolphins, which carry their young for 12 months, could at least be conceiving and birthing babies in these waters during annual returns. 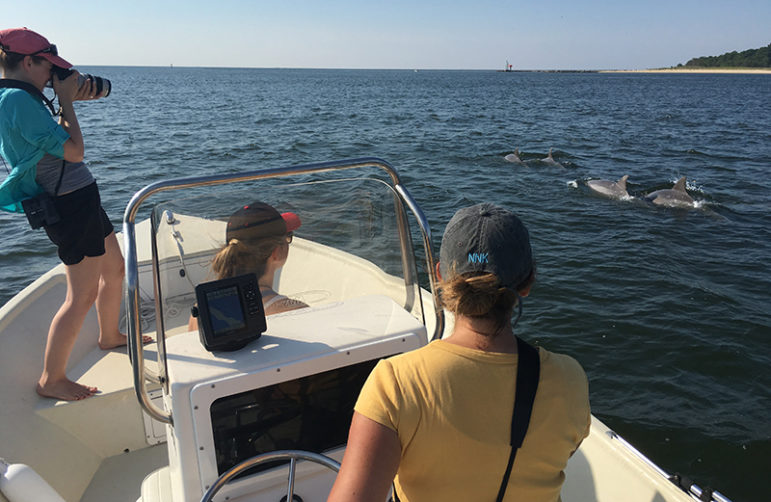 Researchers Ann-Marie Jacoby, far left, and Janet Mann, far right, observe and photograph dolphins near the mouth of the Potomac River. (Photograph taken under NMFS Permit No. 19403 by Madison Miketa)

When Jacoby and two other students witnessed the birth from their boat near Lewisetta, Va., they saw a cloud of blood in the midst of a group of about 50 dolphins. After seeing no signs of injury, Jacoby told the others to look for a newborn.

“Lo and behold, a mom with a newborn, whose fin was still slightly bent, surfaced in front of and in line with the cloud of blood,” Jacoby said.

Witnessing a dolphin birth is rare, even for researchers. Despite studying dolphins for more than 30 years, Mann has yet to see a wild birth. Mann said that a scientist off the coast of North Carolina also might have witnessed a dolphin birth but, unable to confirm or document the mother, didn’t write about it. Several dolphin births have been recorded in captivity.

Dolphins visit the Chesapeake Bay region from April to October, with populations peaking in the warmest months. Mann and her research team, most of them student volunteers, have been focused on the dolphins’ presence in the Potomac, working to understand how many there are and why they come.

According to historical accounts, dolphins were spotted in 1884 as far up the Potomac as the Aqueduct Bridge, just south of Georgetown University in D.C. They were an exotic enough sight at the time that, according to reports, men pursued the animals by boat and tried to shoot or capture them.

Other reports in the late 1800s mention dolphin sightings in the Potomac near Alexandria and Quantico, Va., the researchers said.

More recently, Mann’s team has documented dolphins as far north as the Gov. Harry W. Nice Memorial Bridge, where U.S. Route 301 crosses the Potomac. That’s about an 80-mile trip up the river from the Bay and just halfway to the Aqueduct Bridge.

Their work involves long days of dolphin-spotting, noting behavior as well as physical characteristics. The dorsal fins are as unique as human fingerprints — at least to the trained observer’s eye — and critical for identifying individual dolphins.

“Initially, we didn’t think there would be that many dolphins,” Mann said.

But in their first summer of research, the team identified close to 200, “and that was just going out once a month,” Mann said.

This season, Jacoby and the team have boated on the Potomac as many days as possible to systematically track and observe dolphins near the river’s mouth.

Dolphin observation requires calm, almost windless waters so that choppy waves won’t be confused for dorsal fins in the distance. If the weather is good, the boat will cover about 14 square miles of water, traveling between predetermined points and recording what the researchers see.

“Sometimes, we’ll be out there three days in a row, and we won’t see any dolphins,” Jacoby said. “They are here, but you have to be pretty patient if you do want to see them.”

And sometimes, the wait pays off. The number of individual dolphins has been climbing.

“I’m still going through the data,” Jacoby said at the end of August, “but I wouldn’t be surprised if we had around 1,000 animals that we’ve documented coming into the lower Potomac River.”

The public also is helping to report sightings in the Potomac and other Bay locations.

In 2016, the University of Maryland Center for Environmental Science’s Chesapeake Biological Laboratory launched the Chesapeake Dolphin Watch website and phone app to gather information on dolphin sightings from the public. Nearly 4,000 people have reported more than 2,700 dolphin sightings, occasionally of 10 or more of the mammals at once, according to the website. Locations have been as far north as Maryland’s Magothy River and off Hart-Miller Island east of Baltimore.

Those reports are most helpful when paired with a photo, Mann said. The Potomac researchers use and contribute to a massive Mid-Atlantic Bottlenose Dolphin Catalog managed by Duke University that identifies each dolphin by its dorsal fin. The resource is shared among more than 30 researchers along the East Coast, and fin-matching technology developed with the help of Google’s machine learning programs has made it even easier.

“When we get a photo, then we know that ‘Zachary Taylor’ was seen close to Annapolis,” Mann said, using a name the project has assigned to a dolphin they regularly see in the Potomac. “That helps us know how far these animals are going.”

Some of the dolphins spotted in the Potomac were first added to the catalog in the early 2000s, which gives researchers a sense of their age. Bottlenose dolphins can live for 30 to 50 years.

Anecdotally, people seem to be seeing more dolphins in recent years, the researchers say, but it’s hard to confirm. Jacoby plans to interview watermen who have spent much of their lives on the river to record their memories of dolphin sightings in recent decades.

The Potomac researchers say it’s too early to make projections about long-term population trends. The boundaries for dolphin populations along the Atlantic Coast are not particularly well understood, with territories overlapping and spanning large distances. Many of the animals spotted in the Chesapeake Bay and Potomac River have also frequented the waters off North Carolina. Others have been seen near Cape May, N.J.

“We do think that there are multiple populations coming to the Chesapeake,” Jacoby said.

“And I think the work we’re doing now of photographing them and matching them is extremely valuable for helping to understand the population structure and how best to manage them,” Mann added. 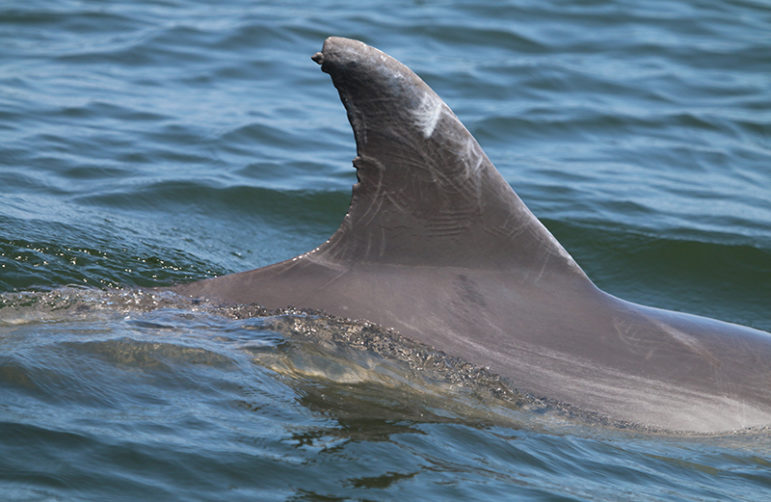 Chessie, one of two dolphins named during a contest hosted by the Potomac Conservancy this year, is easily identified by his unique dorsal fin. (Photograph taken under NMFS Permit No. 19403 by Ann-Marie Jacoby)

In a regional twist, the Potomac-Chesapeake Dolphin Project has always named dolphins identified here after U.S. historical figures, starting with the presidents, then their wives, then some vice presidents. As the number of dolphins began ballooning into the hundreds, the team turned to senators and leaders of other political movements for names, such as Supreme Court Justice Ruth Bader Ginsburg.

This year, the team has been drawing on names of abolitionists and suffragists; there’s now a Harriet Tubman, a Sojourner Truth, and a Gloria Steinem. If the dolphins named after such females have calves, the researchers try to name their offspring after the figure’s children — but they often wait a year to make sure the young dolphin survives.

The researchers who witnessed the Aug. 17 dolphin birth in the Potomac River scrambled to find a name for the mother-baby pair. They settled on the late Patsy Mink, a former member of Congress representing Hawaii, who co-authored the Title IX Amendment of the Higher Education Act, and her daughter, Gwendolyn, a former academic who writes about law, politics and gender and American society.

This year, the Potomac Conservancy hosted a naming contest for another pair of Potomac dolphins in an effort to raise money for the project. The conservancy asked participants to use the theme of historical figures, but not everyone did.

Conservancy president Hedrick Belin said they received more than 3,200 suggestions, and 1,400 people participated in a vote to narrow them down.

In the end, names such as Rachel Carson and Sylvia Earle, famous female scientists, conceded victory to a catchier pair: Mac and Chessie (as in PotoMAC and CHESSIEpeake).

“I think there’s something intrinsically exciting about dolphins,” said Belin, whose organization has an ongoing partnership with the project. “At the end of the day, what’s good for the river is going to be good for dolphins. And gaining a better understanding of what’s going on with the dolphin population in the Potomac, given its relatively recent return, [can teach us about] the Nation’s River.”